The blogosphere has a million corners, countless nooks and several large echo-chambers, complete with their own centres of self-congratulatory gravity. All have been aflame over the last week, saturating events, riots and insurgencies with the weight of historical expectation, the political memory of past iteration and the awesome condescension of easy interpretation. Gaps persist: gender and the dynamics of formally opposed masculinities have escaped all but the most cursory attention. It is one paradox of all this profuse commentary that decrying the statements and manifestos of others is the most satisfying and patronising manifesto of all. At its worst, it engages in the fullest of narcissisms (let’s make this about us and the quality of our analysis) whilst proudly displaying its contempt for thought (now is not the time for theory!). And of course, the problems and challenges are real. Much more real than we can face, too real for the sordid postures of moralising (I denounce Satan and all his works!) and liable to stay as real once we paper over them and return to our default settings.

Oh, and I find myself in unsurprising agreement with Joe and Meera (although I think Ken Livingstone’s attempts to make the link to cuts and social marginalisation is more ham-fisted than shameful). Which is all by way of introduction. There are reams to be written on the way the punditocracy and assorted commentariat are deploying (and misapplying) categories of cause, the unstable and multiple uses made of ‘politics’, the questions of historical precedent and historical return, and on and on. Exhaustion at the war of position prevents any such post. Instead, a mix-tape of diagnosis and critique, with both the smooth joins and the subtle dissonances that implies. More useful than a 1,000 faux-fresh words.

These looters are doing what they’re supposed to; grabbing the goods they see in the shops and can’t buy in a recession. They loot the bling – the sports shoes, gold watches, mobile phones and plasma TVs; and you can recognize the very poor when you see a woman looting potatoes from a corner shop. These acquisitive looters are certainly copying the gold standard of a social contract eroded by and evaporating with the money. These are riots in the cause of consumer goods. Burning and robbing other people’s things is one thing, but soon enough, and with no social cause or justice worth the name, people too become indistinguishable from things: witness the widely-circulated photo of the woman leaping for her life from a burning building; such potential deaths still threaten to bring the house down on top of us. This whole distressing episode began with the police shooting dead a black man in north London they said was a gunman; no evidence he fired a shot, we’re told, but the man was already indistinguishable from his gun.

Let the minutes unleash
The bullets Brixton wishes
Barbed wire is the ivy on my walls
Acrid cordite like mist in autumn
Dissolves the harsh street into pellucid cameos
Think how the striking truncheon outpaces thought
How the burgeoning Molotov cancels discussion
And for just this once in my black British life
Exploded the atoms in me into atoms of power
Let each viewfinder’s instant exorcise
The pictorial myths complacency devises
Each hurtling brick aimed to smash this enchanter’s glass
Aimed to loot the truths for so long packaged in lies
I am the hundreds of putrid meat in English prisons
In derelict houses, in borstals, the millions of condemned meat
Who let the grim minutes unleash their canned grime.

Look at the looted, torched places, look at what they all have in common. Look at Bristol, a port where you could walk for miles and wonder where its working class had disappeared to, which seems to have been given over completely to post-hippy tourism, ‘subversive’ graffiti, students and shopping. Well, those invisible young, ‘socially excluded’ (how that mealy-mouthed phrase suddenly seems to acquired a certain truth) people arrived in the shiny new Cabot Circus mall and took what they wanted, what they couldn’t afford, what they’d been told time and time again they were worthless without. Look at Woolwich, where the former main employer, the Arsenal, is now a vast development of luxury flats, and where efforts to ameliorate poverty and unemployment centre on a giant Tesco, just opposite the Jobcentre. Look at Peckham, where ‘Bellenden Village’ pretends to be excited by the vibrant desperation of Rye Lane. Look at Liverpool, where council semis rub up against the mall-without-walls of Liverpool One, whose heavy-security streets were claimed by the RIBA to have ‘single-handedly transformed Liverpool’s fortunes’—as if a shopping mall could replace the docks. Look at Croydon, where you can walk along the spotless main street of the central privately owned, privately patrolled Business Improvement District and then suddenly find yourself in the rotting mess around West Croydon station. Look at Manchester’s city centre, the most complete regeneration showpiece, practically walled-off from those who exist outside the ring-road. Look at Salford, where Urban Splash sells terraces gutted and cleared of their working class population, to MediaCity employees with the slogan ‘own your own Coronation Street home’. Look at Nottingham, where private student accommodation looming over council estates features a giant advert promising ‘a plasma screen TV in every room’. Look at Brixton, where Zaha Hadid’s hedge-funded Academy has a disciplinary regime harsher than some prisons, and aims to create little entrepreneurs, little CEOs out of the lamentably unaspirational estate-dwellers. Look at Birmingham’s new Bull Ring, yards away from the scar of no-man’s land separating it from the dilapidated estates and empty light-industrial units of Digbeth and Deritend. This is urban Britain, and though the cuts have made it worse, the damage was done long before.

With his customary haplessness, Ed Miliband says that ‘there must be no no-go areas’, but these places are nothing of the sort: they’re parallel areas occupying exactly the same space. Any urban theory stuck in the problems of an earlier era, fulminating against the evils of mono-class estates and rigid zoning, is helpless even to begin to describe what’s going on.

Owen Hatherly, ‘Something Has Snapped, And It Has Been A Long Time Coming’ 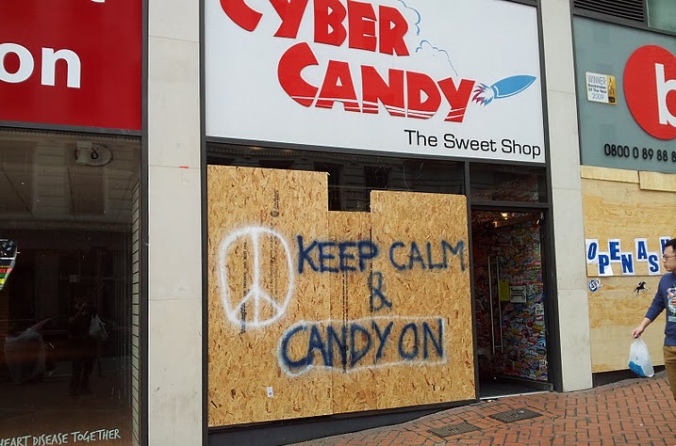 Behind the thinly veiled symbolism of social cleansing/cleaning up the area – for which read gentrification and further exclusion/segregation – emerged the rhetorical division between ‘real’ Londoners and therefore their opposite, ‘inauthentic’ Londoners. Effectively, the idea that ‘these people’, the rioters, were somehow non-citizens was therefore entrenched. All of the twitter commentary that supposedly organised the clean-up events (or was it the Young Conservatives Clapham branch?) parroted the same ideological soundbites – this is the ‘real London’, this is the ‘true London’ blah, blah, yawn, blah. In doing so it established a discourse that serves primarily to divide those, who in the words of Henri Lefebvre (and later David Harvey), have ‘the right to the city’ from those who do not, but also from those who can expect to be treated as citizens under the rule of law, and those who are excluded by virtue of their status as non-citizens.

When the rioting spread so far and so wide that the narrative claiming that it was all caused by ‘outsiders’ and ‘trouble-makers’ from elsewhere coming into the area became untenable, another, still more sinister discourse unfolded. The destruction was instead the work of ‘feral rats’, ‘apes’ and ‘animals’, sub-humans who were therefore strategically positioned by the language of carefully edited media loops, depicting the same self-righteous soundbites, to take the place of rhetorically excluded non-citizens. As non-citizens, these were people who could expect no protection therefore, from the coming ‘all necessary measures’ that the media agenda was simultaneously lining-up to be unleashed – in other words they would be subjected to a renewed and increased state violence. Like the taxonomies of colonialism and the language that surrounded Haussmann’s attacks on the Parisian working class in the 19th century, this language exists to determine not only who has the right to the city, but whose life counts for something, is valuable, and to mark out those whose life is not.

The University for Strategic Optimism, ‘#riotcleanup or #riotwhitewash?’

This is not a revolution (though it may be part of a revolutionary sequence) and I’m fairly certain no one has suggested it is. It is a heterogeneous expression of rage. At the police, at the cuts, at the lack of being able to be heard, at a culture that instils a consumer desire they can’t match, and yes that rage spills over into self-destructive acts. But it is always the poor who liberals berate for being self-destructive even as they too drink suicidally. It’s always the poor who have to be the angels, who in their political act have to be pure, while liberals can have their political consciousness and ironic guilt about shopping from Tesco or spending too much of their money on Fairtrade shoes. (That’s been a particularly disgusting element of comments made by liberals during these events. The disgust at the “consumerism” of the rioters.) Of course firebombing a local pub is an idiotic thing to do, but so is maintaining the status quo.

Anthony Paul Smith, ‘Hatred of the Working Class is the True Cause of the UK Riots’ 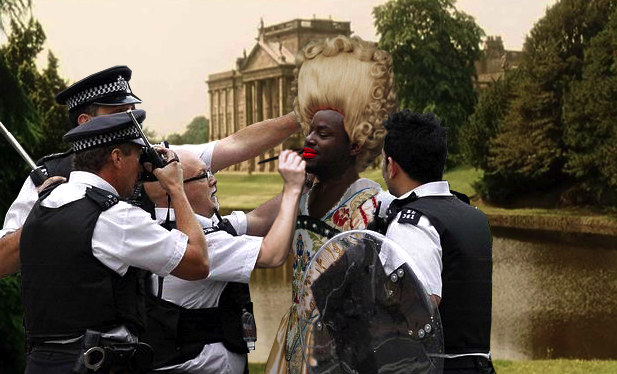 That these bogus explanations could still seem powerful twenty years later, was testimony to the depth of segregation found in the decaying industrial towns as much as to the dogged ignorance, laziness and disinterest which have consistently defined the mainstream media’s views of British racism. It is not just that the brutal, anti-social effects of that racism can be swiftly forgotten thanks to the amnesiac mechanisms which have routinely intervened to block the passage of profoundly disturbing events into the official national history and self-conceptions. The media’s own priorities and styles have also developed a more complex and distanced relationship from institutions of national governance and communication. Mainstream Britain has been required to become more fluent in the anthropological idiom of official multiculturalism, and all parties to this conflict – in spite of their opposed political positions – have come to share an interest in magnifying racial, cultural and ethnic differences so that a special transgressive pleasure can be discovered in their spectacular overcoming. These social and political divisions are presented as unbridgeable breaks in consciousness and experience even while mixing has become a routine and unexceptional feature of urban life. The widespread belief in their absolute nature may also be attractive because it absolves bona fide brits and cultural insiders from the hard work involved in translation and cross-cultural understanding. The normative power of racial common sense is comfortable with simplistic and misleading labels like ‘race riots’. Indeed it is fuelled by the simple racial truths they bring to life.

Creative and negative thinking is needed to generate more complex and challenging narratives which can repudiate those truths and be faithful to everyday metropolitan life by reducing the exaggerated dimensions of racial difference to a liberating ordinary-ness. From this angle, ‘race’ is nothing special, a virtual reality given meaning only by the fact that racism endures.

2 thoughts on “Primitive Accumulation; Or, A Virtual Read-In on the London Riots”