This is a guest post by Eric Grynaviski, an Associate Professor of Political Science and International Affairs at George Washington University. He is the author of Constructive Illusions (Cornell, 2014). He studies sociological approaches to cooperation and conflict, and international ethics. 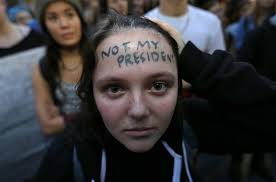 In the wake of the election, people are rejecting the idea that Trump represents them in office. Academics and journalists are calling attention to what loyalty and patriotism mean in the context of such a divisive election. President Obama has called for everyone to rally to Trump, and he asked Trump to make everyone feel included in his America. Protestors oppose this view with the simple message that “Trump is not my president.”

A lot is being written on the subject of national unity, but I want to reflect on what this means. Calls to national unity suppose that Trump is the legitimate representative of the public. But, the idea of being representative and legitimate in this election is more ambiguous than at any moment in American history since I’ve been alive.

Surprisingly, the idea that “Trump is not my president” has been criticized by political scientists and some Democratic politicians. I want to describe some differences between three criticisms of the view that “Trump is not my president.” To do so, I am going to turn to Carl Schmitt. Schmitt was a legal thinker and philosopher during the Weimar-era who ended up supporting the Nazi party. Why turn to Schmitt now? Unfortunately, we are facing some of the same dilemmas Weimar-era Germany did. Deeply racist politicians are entering the White House, the public is divided, and the stakes are quite high for minorities living in the United States. Writing in the 1920s and 1930s, Schmitt faced the question about what it means to say someone is not “their” president head-on during a period of political bitterness and acrimony. Much of the rhetoric against “Trump is not my president” could come straight from Weimar Germany.

One way of thinking about the question about whether Trump is not my president focuses on whether Trump represents people, even when his policies and rhetoric diverge from their preferences and beliefs. Schmitt replied yes. Trump represents you even if you disagree with him in every respect, even if we transition from a Trumpocracy to a Trumpikatorship (a Trump Dictatorship). The president is the only person who is elected by all voters, so he is the only person to represent all voters. Schmitt’s idea is that there is some homogeneity within a country (something held in common) that can, and should, be represented by a single person.

Unfortunately, I worry that some of the people calling for unity are coming from this perspective. When people say we need to pull together because we are all Americans and our strength is in unity—and thus we need to endorse Trump’s representation of us—they are making this argument. The question is “what is unity?” Some interpretations of Schmitt focus on his anti-Semitism: all Germans have in common a natural aversion to being prey to the Jews. I do not think this was his original meaning (though it changed over time). In the 1920s, I think he meant that all Germans are Germans, which marks them as different from the French, the Poles, or any other group. And whatever differences Germans have with one another, they are still special because they are different from non-Germans. In other words, Schmitt did not have any content within his calls for unity: it was an empty message appealing to the unity of the nation without giving the nation any content.

A Schmitt-like claim that Trump represents “us” and is therefore “my president” also seems a bit hollow. The normal rhetoric we use to give substance to being American is based in ideals, such as tolerance and liberty. Trumpocracy clearly does not connect with those ideals. Calling for unity because we have something in common does not work when the person we are supposed to rally to does not share that something. In this sense, one can easily say “Trump is not my president” because I am not racist, sexist, xenophobic, etc. 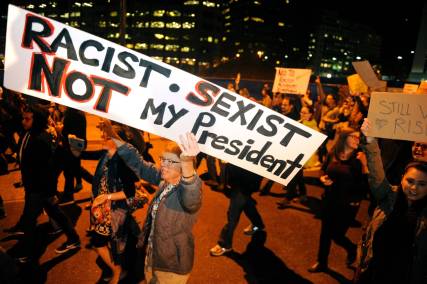 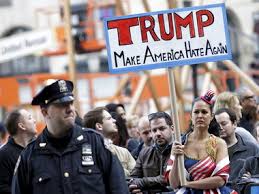 The second argument Schmitt emphasizes is the danger of refusing to accept a new leader as president. Andrew Sabl reaches this conclusion on the Monkey Cage, when he writes, “people are likely to disagree over who is the best leader, especially in diverse societies divided by religion, culture and ethnic identity. Indeed, these disagreements may easily lead to war between different factions, each with its own preferred leader or petty warlord.” In other words, the only alternative to accepting an election outcome is civil war. Schmitt echoes this view. For him, the alternative to accepting the government is declaring war on the government; there is no middle ground. Therefore, the rhetoric that “Trump is not my president” is dangerous, inviting chaos.

This stability argument is wrong because it distorts what people mean when they claim “Trump is not my president.” I do not think that most people on the streets mean “Trump is not the president-elect of the United States,” at least that is not what they mean yet (see below). Instead, it is a claim about representation. People are saying that Trump does not represent their views, and his views are so repugnant that they will oppose his presidency at every opportunity. The Trump-picketers—the Women’s March on Washington, for example—will not initiate events that will end with tanks rolling down D.C. streets. These protestors pose no genuine threat to the American constitutional system, just as there was no genuine threat during the Civil Rights March or during demonstrations against abortion rights.

There is also a giant leap in this argument. Sabl argues that “we must accept the authority of leaders we thoroughly hate.” This gives me the most pause because of the connection to Schmitt. For Schmitt, the danger of civil war is so real that we need to pass a great deal of authority into the hands of the president. With the growth of executive powers in the United States, Trump, with a flick of a pen, can wipe out an incredible amount of our national environmental protections, begin a war, dramatically expand Guantanamo Bay, and in the modern world, even assassinate American citizens abroad (e.g., following precedents set in the War on Terror). Unlike Nazi Germany, the American political system historically allows citizens to fight as hard as possible to limit the authority of hated leaders. We can accept someone as president, but still fight as hard as possible to narrow their authority and constrain their choices. Congress, the Court, and the public (through voice) can undermine presidential authority, and doing so is part and parcel of the American experience. [Spoiler: We almost always fail. Today I bet we regret creating such a strong presidency.]

Saying “Trump is not my president” and refusing to accept Trump’s authority therefore strike me as reasonable, if people mean Trump does not represent their views and they refuse to be complacent when he uses his authority to do things they find disastrous. Raising the specter of civil war does not seem helpful.

A third view is that “Trump is not the president.” This claim is the most radical. This perspective would say something like the following: Trump is so morally repugnant, and would be such a disaster of a leader, that he is ineligible to be president. One might give this a constitutional interpretation. The Constitution requires people to be 35 to enter office, hoping that this will lead to mature and sensible office-holders. It is a maturity test rather than an age test per se. Because Trump is less qualified for office then most 34-year-olds, his election ignores the founders’ intentions in writing the Constitution (see (gated) Spann’s argument, sure it may not be the best argument but good enough for many).

This is the most dangerous version, and one that I suspect at least some people in this country are considering. This view of how to oppose Trump is also Schmittian in a sense. One reason why Schmitt favored the growth of executive powers is that sometimes you need to break the rules in order to save the rules. In exceptional moments—when the Communists are at the gates—having one’s hands tied by constitutional processes prevents decisions that need to be made to save those the society. Rejecting Trump along these lines does not need to be violent. We could resurrect the idea of a “general strike,” in which people simply refuse to go to work until he resigns.

I never thought I would say this in my lifetime, but I can imagine a scenario for the next four years in which the public wants to pursue this route (see Nexon’s post). Trump may overstep the bounds of his constitutional powers when in office. In the debates, he already said that he may not respect the norms of constitutional rule and respect the outcome of the election. Beyond constitutional norms, if Trump follows through on just some of his campaign rhetoric, the first 100 days of his term may see irreparable damage to the global environment, racists in the White House, deportation of millions of immigrants, and the FBI investigating political opponents. His campaign and its surrogates are describing protesters as communists, paid plants, and so on.

In this case, the claim that “Trump is not the president” is the most politically important because it denies that Trump has a legitimate claim on his office. The difference from Schmitt is that instead of turning to the president to suspend the constitution, it turns to the public to save the constitution from Trump.

At the moment, these seem like dark times. Looking to Weimar may be the best analogy because it is the period of time in which an imperial presidential system appeared the most necessary and the most dangerous. Protestors have figured this out (and the importance of hair jokes).

The question is if people move from the idea that Trump does not represent them to the view that political action needs to be taken to remove Trump. Unlike others, I find that “Trump is not my president” is a BEAUTIFUL expression of what people mean.

4 thoughts on ““Not My President”: Trumpocracy and Dissent”