Part One just over here. 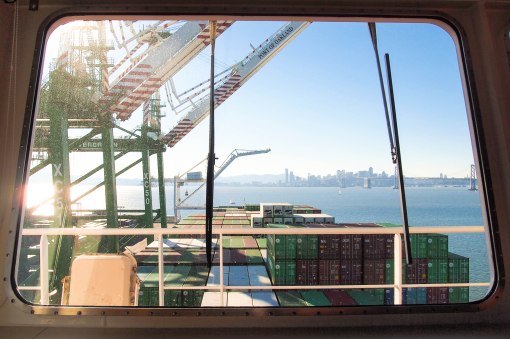 LK: First of all, before we proceed, can I say how much I am enjoying this conversation?  Part of this is the ability to compare my experiences with someone of the same political disposition and theoretical commitments who can comment on the contrasts and similarities of the experience of travel aboard a containership, but part of it is also our gender identification.

I felt a kinship with you upon meeting you (as I did with Deb Cowen upon reading her amazing book) precisely because of us confounding gendered expectations of who would do this sort of research in an area –maritime labour, security, travel, and labour– that has always been –and continues to be– marked so profoundly as masculine. And I was really curious about your experience.

I think although I experienced one instance of ass-patting, by and large I think I had it a lot easier than you. One reason may have been that CMA CGM, the shipping company on whose ship I was steaming, actually takes onboard passengers as a matter of course, and there were two other women passengers, both in their 70s, on the ship with me. Whereas –and please correct me– my impression is that you were on a shipping line that doesn’t necessarily take on passengers. I also think my age –I am 46– probably to some extent insulated me from some of your experience. Two other factors also mattered hugely: one that there was a woman cadet being trained to be an officer onboard who could really hold her own with the male officers and crew; and the second, that the captain’s wife was also traveling with us, and her presence at the table, for instance, completely changed the tenor of the meals.  So there were 5 women on a ship of 37 people.

But what really struck me was the range of masculinities aboard the ship. The European officers certainly performed their manliness very differently than the Filipino and Keralan crew, and even within the rank of the Europeans (most of whom were Croat), the deck officers crafted their bodies in a different way than the deck officers: the latter worked out in the gym to build up their arm muscles and upper bodies into taut masses of muscles; the latter, not so much.

END_OF_DOCUMENT_TOKEN_TO_BE_REPLACED

Following previous series on Charmaine’s slow boat to China, and introducing Laleh’s first contribution to The Disorder, the first of two posts (the second is here) on what it is to study the labour, politics and infrastructure of oceanic logistics. 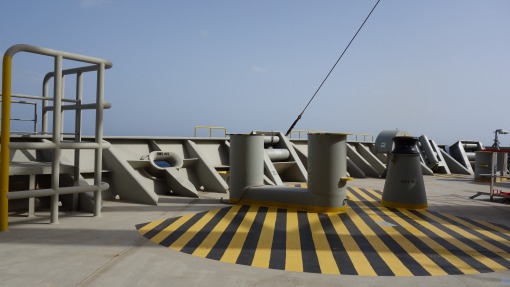 Laleh Khalili (LK): Charmaine, both you and I have taken a containership trip in the last few months, you from the West Coast of the US across the Pacific to China and Taiwan, I from Malta through Suez Canal and around the Arabian Peninsula to Jabal Ali, Dubai.  There are lots of things we can talk about: shipboard labour, the politics of the ports, being women in overwhelmingly masculine spaces, etc.  And we both want to know different things about aspects of the other’s searoute which were not similar to our own.

So here is my first question:  What struck you the most about the daily routine of the ship?

Charmaine Chua (CC): I’m thrilled to begin this conversation, Laleh. I want to answer your first question in twenty different ways, but the first thing that comes to mind is the regimentation of everyday life, and the boredom it elicited: breakfast at 0630, work orders doled out at 0700, a coffee break at 1000, lunch at 1130, coffee again at 1500, dinner at 1730. On the days when I would do manual jobs with the crew, we agonizingly counted the mind-numbing hours to the next break. The hours were long, the jobs physically demanding, dangerous and intensive. There is so much repetitiveness to the work that the crew often fought over which of the less-boring jobs they would be assigned to – spraying the deck down with a hose was better than mopping it, taking soundings was better than cutting rags. For those who are watch keepers on the bridge, their work four hours on, four off, then four on again. Not only is sleep was hard to come by because of the shift structure, but shore leave has also become a thing of the past, since there is never enough time to get on land before having to be back for your next duties. When asked, most of the crew describe their jobs with these words: “maintenance, just maintenance. Just following orders.”

I’ve since been wondering about the implications of naming maintenance as the primary form of seafaring work. Ships are easy to romanticize: they remind us of adventure, our smallness, our finitude. But if the most important tasks on the ship are not the technical ones of circumnavigation and exploration (those romantic jobs that gesture to the ocean as an endless horizon of opportunity and freedom) but maintenance, then the primary task of the seafarer is prolong the durability of already existing value. Ships break in half, sink, tip over, and are constantly threatened to be compromised by rust and corrosion; in order to continue the mundane task of commerce and transportation, they must appear as if they are running perfectly in order to protect the value already invested in them.