Friend, former Liberty colleague and Bad Reputation scriber Sarah Jackson drew my attention to a new campaign by End Violence Against Women aimed at men. That was their video. Thus far 188 people (hopefully mainly men) ‘agree’ on Facebook (as the campaign asks them to) that ‘Enough Is Enough’. As Sarah notes, this is the latest in a series of campaigns addressing men directly. They seem a direct response to that most common of feminist points about rape, namely that victims/survivors are not to blame and the focus should not be on them for what they wear, what they drink or how they express themselves but on the men who rape.

Obviously, consciousness-raising for men is necessary in all kinds of ways, and will be for at least as long as supposedly intelligent discussions continue to be dominated by pernicious cop-outs and questionable analysis. Any funding and attention to rape prevention is to be encouraged and supported. Let’s take that as read. But these campaigns are intended to be tools for advancing rape awareness and anti-rape politics, which makes it worth asking what kinds of awareness and politics they promote. How is it that they seek to recast ideas of appropriate manliness?

Begin with some of images directed at men to encourage their consumption of status signifiers (and taken from the relentlessly brilliant Sociological Images).

More pervasive than any charity or political campaign, they represent in fairly standard terms the field of masculine representation in relation to sexual prowess and submissiveness. Intriguingly, the common theme in this triptych is not so much male-on-female violation as the physical empowerment of men in groups (men dominant in the presence of other men) against a feminised supplicant. Note that in the second D&G ad the male object of desire adopts a typically feminine pose and has his face obscured. Something about the reciprocal nature of the gaze to be discussed there.

Rape-conducive attitudes are common among those who belief in strong gender binaries. Although I haven’t done significant follow-up research on published work since, I’m still continually drawn back to an ancient (1983) piece by James Check and Neil Malamuth, which places some of these issues in sharp relief. Check and Malamuth found extraordinarily high levels of self-reported willingness to rape among male university students. In brief, subjects demonstrated an awareness of what rape was (by distinguishing between stories of consensual, ambiguous and forced sexual encounters) and were then asked to indicate in which scenarios they would themselves enact sexual violence (if they were confident they wouldn’t be caught). 1/3 of the respondents said they would rape in the scenarios presented. The crucial extra piece of information is how this willingness was distributed among men dependent on their propensity to sex-role stereotyping. Of the men who showed high levels of stereotyping (i.e. who believed that men and women were very different) 44% reported some likelihood that they themselves would rape if they could. That figure was ‘only’ 12% for low sex stereotypers.

Given this kind of association between masculinism and rape propensity, it seems natural that anti-rape advertising would position itself in a way that appeals to the men most likely to rape, which is to say the most traditionally patriarchal ones. Indeed, that should be our demand for effective intervention. So while some target the common tropes used to justify sexualised assault, as in this Not Ever campaign video, the more general trend appears to be to appeal to those patriarchal norms that are nominally opposed to rape. Classically conservative, these are the ideas of men as honourable, protective, gentlemanly (but not necessarily gentle), protective, faithful, often monogamous, and so on. This is best illustrated by the Californian ‘My Strength’ campaign, which is pretty explicitly about men not raping because they’re men and because that’s not what strong, cool guys do, yeah?

Likewise Lewisham’s ‘Know The Difference’ campaign posters, which overflow with references to what ‘real’ men do and think and how you can ‘have fun’ without engaging in sexually-aggravated assault. Note how both sets of ads also engage with common myths about rape. In speaking ‘to’ potential rapists, they feel compelled to begin from the standard trope that the line between rape and consensual sex can be confusing. Their focus is on dates which don’t lead to sexual satisfaction, not on random assaults on the street or systematic abuse by authority figures. As lines of communication between the men featured and the men being addressed, they say “hey, I know how it can be”. 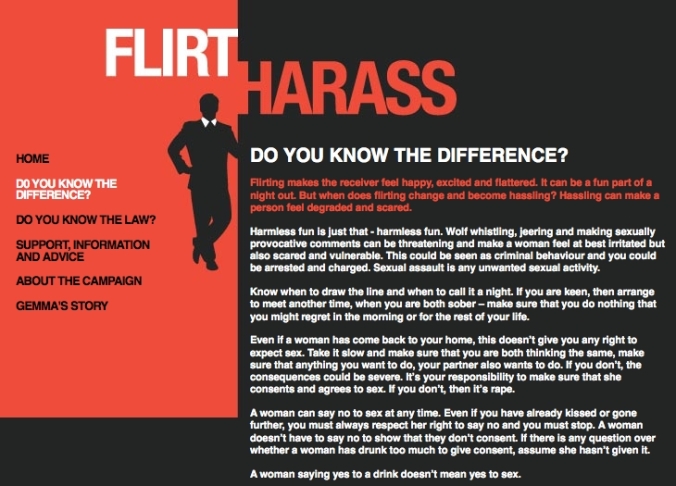 There’s something about this all which is faintly infantalising, like an NGO-version of Jermaine Stewart (we don’t have to take our clothes off to have a good time!), or even the right-wing fantasy of a nannying state, in loco parentis and explaining to young thugs how to woo the ladies. In the ‘Know The Difference’ campaign at least, softly persuasive information about women’s feelings is combined with the threat of the stick of law (you could go to jail, boyo), although unsurprisingly without any information on how ridiculously low conviction rates are.

The crucial thing, I think, is the way in which the appeal to genuine masculinity is made. On one reading, rape is removed from the menu of acceptable male behaviour while preserving or promoting a range of other patriarchal attitudes, in particular the idea of men as decision-makers, material providers and romantic pursuers, the active agents in the drama of love. This means a campaign of persuasion which half-chastises men but still in the name of a kind of phallic power, that essential male strength which is taken to be greatest exactly at the point in which men restrain themselves (I am more than capable of hurting, but I choose not to). To me, this is the voice of the father, the male authority figure who sets limits, teaches control and disciplines the capacity for violence.

More ambiguously, how do such strategies for male restraint sit side-by-side with preparations for female self-defence? Enter Sharon Marcus, Ann J. Cahill and Iris Marion Young. Most famously, in ‘Fighting Words and Fighting Bodies’, Marcus argued against attempts at persuasion and for “strategies which will enable women to sabotage men’s power to rape, which will empower women to take the ability to rape completely out of men’s hands”. Cahill’s Rethinking Rape similarly attempts to reintroduce some wider circuits of gender power and focus on how the pervasive effects of rape culture interact with norms of feminine bodily comportment, which is to say the various ways in which female bodies are made and limited in the acquisition of ‘proper’ social roles.

The horror-cum-vicarious-pleasure of Beatrix Kiddo’s murderous revenge in Kill Bill only really makes sense against this background. In a culture which so diminishes the embodied capacities of women, Kiddo’s violence is fantastical, and much more difficult to process than equivalent violence carried out by men on screen, although there is nothing about it that transcends the putative biological limits of femaleness. (These reflexes are strong: I considered putting a warning before that video until I realised that I was worried about this particular scene causing offence in the midst of an extended post about violence and rape.)

As Iris Marion Young put it so aptly in ‘Throwing Like A Girl’:

Women in sexist society are physically handicapped. Insofar as we learn to live out our existence in accordance with the definition that patriarchal culture assigns to us, we are physically inhibited, confined, positioned, and objectified. As lived bodies we are not open and unambiguous transcendences which move out to master a world that belongs to us, a world constituted by our own intentions and projections. To be sure, there are actual women in contemporary society to whom all or part of the above description does not apply. Where these modalities are not manifest in or determinative of the existence of a particular women, however, they are definitive in a negative mode–as that which she has escaped, through accident or good fortune, or more often, as that which she has had to overcome.

One of the sources of the modalities of feminine bodily existence is too obvious to dwell upon at length. For the most part, girls and women are not given the opportunity to use their full bodily capacities in free and open engagement with the world, nor are they encouraged as much as boys to develop specific bodily skills.

Again, this need not involve any opposition to anti-rape campaigns aimed at men which somehow play on men’s glorified images of themselves and their strength. But it does open up a more thorough-going investigation of what Marcus calls rape scripts, the internalised narratives of gender expectation that pre-emptively assign victims and perpetrators long before any actual moment of violence and violation. Speaking in these terms evades the compulsive return to essential qualities, and can accommodate awareness of male-on-male rape and violence (and even female-on-male rape and violence) without re-iterating traditional social roles.

Of course, these are not just conceptual questions. They have implications for practice, and the test of anti-rape campaigns must in large part depend on their success in reducing rape incidents. Given the climate of austerity I wonder how much research is done on the impacts of these ads and the effects they produce (if anyone knows more about this, please do leave a comment: I’m genuinely intrigued).

In particular I’m conflicted about the assumption apparently shared by all interventions of this kind: that rape is the consequence of a paucity of information and thus that men will be less likely to rape if they know about its effects and the possible sanctions. Along with the tacking-on of that ubiquitous piece of campaign PR – the chance to ‘have your say’ – this makes anti-rape campaigns similar in form to attempts at raising money for food aid or cancer research. Contemporary charity discourse and funding pathways doubtless reinforces these tendencies, but it all seems to give rape a strange gloss. If rape is fundamentally about power – and I think it is – then why would knowing how much it makes someone suffer make you less likely to do it?

Me, I prefer Propagandhi’s ‘Refusing To Be A Man’ (although I just about recognise that anarcho-vegan-punk-metal won’t be for everyone).

I’m not going to try to tell you that I’m different from all the rest
I’ve been subject to the same de-structure of desire and I’ve felt the same effects
I’m a hetero-sexist tragedy. And potential rapists all are we.
But don’t tell me this is natural. This is nurturing.
There’s a difference between sexism and sexuality.
I had different desires prior to my role-remodelling.
And at six years of age you don’t challenge their claims.
You become the same.
(Or withdraw from the game
And hang your head in shame).
I think that’s exactly what I did.
I tried to sever the connections between me and them.
I fought against their further attempts to convince a kid
That birthright can bestow the power to yield
The subordination of women and do you know what patricentricity means?
I found out just a couple of days ago.
It means male values über alles and hey! Whaddaya know…
Sex has been distorted and vilified. I’m scared of my attraction to body types.
If everything desired is objectified then maybe eroticism needs to be redefined.
And I refuse to be a “man”.