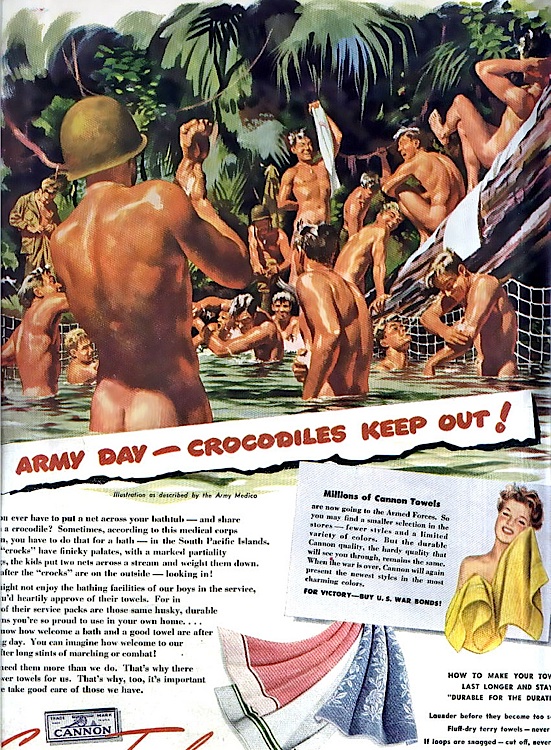 The ever-excellent Sociological Images offers up this 1940s advert, and others like it, as an example of how images previously taken to be innocent consumer bait for stereotypical homemakers now appear to us as dripping with homoeroticism. They may have added too that this half-ironic, half-nostalgic distance is what endears us to such images, which we then enjoy as vintage objects, for all that we know about the true historical context in which they were produced.

One common idea, which relates nicely to military bathing aesthetics (cannon towels? really?) is that many bonding behaviours in nominally heterosexual, male-dominated groups are in fact homosexual, but in a disavowed or repressed way. The scrum, the shared shower, the bunk-beds, the exclusion of women not only from the fields of play and war, but also from the various celebrations and carnivals that follow, all seem to indicate a desire for intimacy that cannot be named as such.

In the excellent Bring Me Men (which deserves its own dedicated review), Aaron Belkin identifies a more complex relation. In becoming military men, there is a need not only to disavow femininity, but also to become intimate with the ‘unmasculine’ and the ‘queer’. Rather than identifying a direct alignment of the masculine with the military, or seeing gender norms as accidental in their intersection with the military, there is instead a constitutive tension between the masculine and the unmasculine (or, we might say, between the strongly heteronormative and the homosexual). Basic training relies on a traumatic ambiguity, continually casting initiates as by turns masculine and unmasculine, so that no soldier can ever be sure that they were sufficiently on the ‘right side’ of the line. As one Marine put it: “The opposite of feminine? No. To me, what is masculine? I don’t know. [pause] And I’ve worked so hard at being it”. The continual ambiguity – what Belkin calls discipline as collapse – interacts with surveillance and punishment to produce the soldier-subject.

I discovered that in the latter decades of the twentieth century, male American service members penetrated each other’s bodies ‘all of the time’. They forced broom handles, fingers and penises into each other’s anuses. They stuck pins into flesh and bones. They vomited into one another’s mouths and forced rotten food down each other’s throats. They inserted tubes into each other’s anal cavities and then pumped grease through the tubes. And parallel to these literal penetrations, they subjected each other to constant, symbolic penetrations as well. Penetrating and being penetrated have been central to what it means to be a warrior in the U.S. armed forces.

This view of a kind of compelled violation, one overlaid and shot through with ideas about homosexuality, femininity, gender failure and masculine remaking, finds a powerful resonance in Peggy Reeves Sanday’s classic work on male bonding and rape culture in the American frat house. The kinds of experiences reported by those inducted into their new brotherhoods closely track Belkin’s discovery of military initiation culture. ‘Pledges’ were compelled to go through all kinds of ritual humiliations, called  “scum, wimps, fairies, shitheads, worthless”, often made to strip (with pain inflicted on their genitals by their brothers-to-be), forced to drink vomit-inducing concoctions, subjected to both mock-castration and mock-faeces eating, and so on, all in the process of breaking down previous identities to forge new ones. As Sanday summaries:

The ritual inducts pledges into the brotherhood by first producing and then resolving anxiety about masculinity. The ritual produces anxiety by representing the feminine to the pledge as both dirty and as part of his subjectivity. The ritual then resolves the anxiety by cleansing the pledge of his supposed feminine identification and promising him a lifelong position in a purified male social order.

The connection between such a masculine identity and rape then seems vividly obvious. What Sanday calls the mythologies of the polluting woman and the engulfing mother are expelled through ritualised brutality. The fraternity takes on the role of the father and promises some level of control over anxiety, ambiguity and infantile fantasy. And since this security and identity depends so strongly on the silencing of the feminine, women easily become the outlets for sublimated homoerotic desire and group bonding through violence. 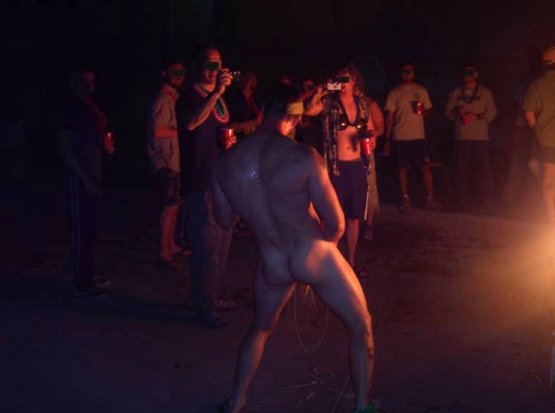 But wait! This does not necessarily show that military initiation is either an entirely coercive process of submission or that said submission is somehow substantively homosexual in forging male bonds. Instead, it is liminality and transformation, but also security and identity, that are at stake. Paul Higate in a way develops Belkin’s point about the interplay between the masculine and the unmasculine in his contribution to the International Feminist Journal of Politics special issue on ‘Rethinking Masculinity’ (out soon!). In the unforgettably titled ‘Drinking Vodka from the ‘Butt-Crack”, he advances a view of military fratriarchy (the community of brothers) and the place of hazing rituals within its bounds. Drawing on images from the 2009 Kabul Hazing (including the one above and the one below), he argues that the homoerotic content of the rituals were actually about testing the resilience of the hyper-masculine, heteronormative military culture:

[W]hile the opportunity for male-on-male penetration was offered up as possibility, this act, and by implication homosexuality, was actively rejected. Skilfully, and with mutual consent fostered at the unspoken level, this heteronormative interaction is boundary making. It steers a careful course between the homoerotic and the homosexual, where the latter is rejected in favour of norm-bound ritual by which heterosexual resolve is found to be resilient in the face of the test. As Mechling puts it in regard to paddling and hazing, ‘presenting the naked buttocks to the brothers is an ultimate act of trust … it is a powerful sign of paternal love’. In the similar context of the military, social practices of these kinds are productive of not-gay identities enacted through a nuanced and ritualized play-frame, as well as in a more brutal sense where individuals can be sexually abused and tortured in the name of military masculinity [relevant citations removed for ease of reading] 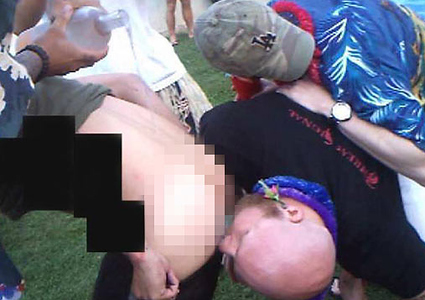 A superficial homoeroticism, then, that guards against homosexuality. The ‘threat’ of actual homosexuals to contemporary western military culture is thus clarified too: what could be more troubling in such a ritualised play-frame, in such a playing-at-transgressive-gayness, than an actual homosexual? So, to return to those towels, yes, a changed interpellation of the male-on-male aesthetic, but not because the fratriarchal dynamics have themselves changed. One element of initiation and bonding (initiation which necessarily alternates pleasure and pain), transposed into a commodity, and yet – in spite of its innocence-and-warmth patina – revealing nonetheless. The homoerotic is still present, and still disavowed, in contemporary military initiation. Far from abandoning an old innocence for a new explicitness, fratriarchies continue to mobilise, to horrify, to blur and to celebrate in ambiguous relation to the danger-pleasures of male-on-male violation and conjoining. A militarised liminality-becoming perhaps less obvious to us now, or maybe just sold through video games rather than shower accessories, but no less efficacious for that.