“I saw folk die of hunger in Cape Verde and I saw folk die from flogging in Guiné (with beatings, kicks, forced labour), you understand? This is the entire reason for my revolt.”.[1] 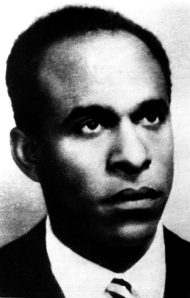 I sincerely believe that a subjective experience can be understood by others; and it would give me no pleasure to announce that the black problem is my problem and mine alone and that it is up to me to study it…Physically and affectively. I have not wished to be objective. Besides, that would be dishonest: It is not possible for me to be objective.”.[2]

For some time, I have been preoccupied by the connections between the ways in which we see, analyse and interpret the world, and the forms of political action to which this gives rise. In general, for critical social theory, the challenge is how to think about the world such as to understand and overcome structures of injustice or violence in it.  As a particular instance of this, the anti-colonial movement of the middle part of the twentieth century provides much food for thought, not least when so many point to patterns of colonialism and imperialism in world politics today.

In the paper I presented to the International Studies Association conference a few weeks ago, I offer a particular reading of Frantz Fanon and Amílcar Cabral as philosophers of being, knowledge and ethics.  Commonly, but not exclusively, these two figures are understood as having important things to say about revolt and resistance – Cabral is portrayed as the arch-pragmatist who emphasises the need for political unity and realistic objectives, whereas Fanon is frequently engaged for his affirmative treatment of violence in an anti-colonial context.  In this sense, they are largely approached as political thinkers and activists rather than philosophers per se.

Yet, their systems of thought stem from distinctive, and in important ways shared, philosophical commitments on the nature of being (ontology), ways of constructing knowledge (epistemology) and the ethical foundations of engagement (um, ethics). These foundations are strong, coherent and compelling points of departure and important in terms of understanding what kind of future order they envisaged.  What are these, and how do they support an anti-colonial political programme? What is the relevance of this intellectual legacy today?

I. A multi-foundational political ontology (we are many things)

Whilst I will continue to search for a more elegant expression to capture this, I feel that it is accurate. What I mean when I say that there is a multi-foundational ontology of politics at work in the thought of Fanon and Cabral is that both argue that there are multiple domains through which colonial power operates and which constitute it as a form of domination. Briefly, these include the economic structures of capitalist imperialism, political repression, psychological negation, social apartheid, racial discrimination and cultural erasure. Fanon and Cabral both recognised these structures as ‘reciprocal and dependent’ , though not reducible to one another. The irreducible nature of this multiplicity is an important claim – they both reject the ultimate and demonstrable priority of master categories of being such as class struggle, individual self-realisation or racism. Rather, they claim a fundamentally multi-foundational basis for political life. Working against colonialism in an effective and complete sense thus meant working against it in all its connected dimensions.

This is slightly different to the idea of intersectionality that has emerged within postcolonial feminist literature most obviously  – it is not so much the idea that there is an emphasis on intersecting structures of oppression such as class, race and gender which produce particular effects, although both Fanon and Cabral would accept this broad idea. Rather, the multi-foundational political ontology that is present in their work suggests that the political is present at all levels of analysis and domains of social life. The idea that one should sort between them to determine where to really start, a common dispute within social theory, is belied by the irreducibly plural constitution of the political.

II. A situated epistemology; affect as a mode of apprehension (from where you know determines what you know; feeling is a way of knowing)

Reality, for once, requires a total understanding. On the objective level as on the subjective level, a solution has to be supplied.[3]

In using their ‘reality’ – of colonialism, racism and struggle – as a critique of the ‘objective’ analysis of their more orthodox contemporaries on the European left, both thinkers were critiquing the ways in which social phenomena were being known. In both, we find critiques of the distant and abstracted ways in which colonialism is understood and rationalised within Europe, even by its critics. For Fanon and Cabral, knowledge of colonialism comes ultimately from those who experience its various dimensions and exclusions in their lives as its supposed objects. In this, then, there is an acknowledgement and embrace of the particular power and insight generated by situated knowledge claims. It is not that these viewpoints are exclusively the foundation of knowledge: rather it is a reminder that these should be the starting point. Both Cabral and Fanon used their professional positions – as agronomist and physician respectively within the colonial governmental structures – to engage deeply with the political, economic, social and psychological experiences of the colonised as a basis for their analyses.

A second aspect of their epistemologies, arguably one rather more prominent in Fanon than Cabral, is that affective engagement with the colonised becomes an important mode of apprehending colonialism. In particular, its unjust, humiliating and de-humanising character cannot be understood through detached rationalist modes of explanation or analysis; rather, they fundamentally require an emotional and empathetic engagement and response in order to be known as forms of violence.  This is connected with the situated character of knowledge claims, but is distinctive in that it speaks directly to how we apprehend. This is important in terms of opening up space for a form of shared understanding amongst those not subject to colonialism in the same ways, and thus a form of solidaristic response.

The ways in which these thinkers viewed knowledge clearly fit with their account of the multidimensional character of the political – both were more elastic and embedded in the many details of colonial domination than other theories of colonialism. Importantly, as will be discussed next, they were also grounded openly in a humanist ethical framework which fit into their accounts of being and knowledge.

III. Ethical humanism (we identify with one another through our shared humanity)

‘Humanism’ is a term with many meanings – however, it captures some core themes within the ethical frameworks of Fanon and Cabral, which in turn underpin their conceptual worlds.  Fundamental in this is the notion of a universally shared humanity – a radical idea in the face of structures of stratified and embedded racism – which should inform how politics and economy are organised and re-defined.

For these two thinkers, it underpins the necessarily universal – and universalisable – character of the problems faced. As Fanon shows, following Cesaire, colonialism de-humanises the coloniser as well as the colonised, and thus the objective must be a new type of humanism. As he argues, the suffering of the Negro is that of the Jew – both are subject to the same political logic and the same violence, and crucially, this unites them.  Humanism – understood here as an ethical universalism – is thus the appropriate response to the divisive structures of colonialism, which operates through the ranking and division of humanity into races and standards of civilisation.

An ethical humanism also informs their obvious preoccupation with the direct experiences of suffering, violence and impoverishment as part of colonialism – it is a type of grounding in the concrete and immediate experience of peoples which complements a wider analysis of the causes and structures underpinning these phenomena.  Clearly, this complements the emphasis on empathy as a foundation for political knowledge mentioned earlier as it reinforces the role that being able to identify with the experiences of other subjects plays in political action.

Clearly, the above summarises the key ideas in only the briefest of ways, and does not answer a raft of substantive and detailed questions which may be legitimately raised. My purpose here is mainly to introduce the ways in which I have been reading and reflecting on their work and open some lines of thought. Both men died young, in the years before their adopted countries achieved independence – it is thus something of an open question how they would have viewed the events thereafter, or indeed now.

Their ideas however are useful places from which to start in thinking about the present. The reductive ways in which we see or simplify the political – into questions of religion, identity, class or development – are rightly problematised if we accept an inherently multi-foundational ontology of the political. That is to say, we might be better off accepting this as a starting point rather than arguing over which of the various grand narratives provides the best structural account of the political.

Thinking about from where our knowledge comes from and whose realities are engaged is also an important question for the present – perhaps especially in thinking about the tendency within solidaristic movements to try to speak for rather than with those who it regards as dominated. Fanon and Cabral clearly sought to put their own interpretations and analyses forward and in this sense they are not innocent mouthers of the authentically represented struggle. Yet, they both recognised the problem and strove to invert the supposed authority of the scientist or professional over the colonised subject through re-positioning their own lenses.

Finally, admitting that a form of affective engagement underpins, quite legitimately, our political judgements is an important move to make, and one that echoes more widely with arguments made within feminism and elsewhere on what kind of terrain politics should take place. The point that one cannot understand various questions of injustice without more basic foundational assumptions about human dignity has been a contested and problematic one within political theory – but it has largely remained a point about the rational foundations of politics. Less emphasised, less appreciated and less understood is the question of human empathy as a vital basis for political action, yet it is one without which the core complaints against colonialism do not make sense. In thinking about the imperial structure of politics today, it is clear to me at least that we need to make space for a type of intellectual and political engagement which can appreciate multiple spaces and dimensions of domination, the importance of engaging with lived experiences of domination and of responding to them through a humanist, humanising ethical framing. How this is done in different circumstances is not something to be determined abstractly but concretely.  Nonetheless, Fanon and Cabral offer us some basic wisdom for continuing such an engagement.

21 thoughts on “What We Talked About At ISA: Critique in Anti-Colonial Thought: Fanon and Cabral as Philosophers of Being, knowledge and ethics”