Race is a structure of oppression. So long as the structure remains, so does race. However, while there is plenty of talk about ethnicity and social cohesion, pathological cultures, and broken communities, race is usually mentioned only in its disavowal. And racism? Few would profess to that habit; most would comfortably label racism as a reactionary attitude. But to what imaginary golden mean? It is a privilege to believe that racism is a reaction rather than a catalysing agent of oppression. Meanwhile, all of us are variously implicated in this structure of oppression called race.

Even on the left, race is seen to be somewhat passé, and happily so now that the next world crisis in capital accumulation has arrived and we can all finally re-focus on the real thing: class. But what is the difference between race and class? Is it the difference between superstructure and base? Race does involve identification, both in order to oppress and in order to redeem. Yet in this respect, it is no more or less an identity than class. With the exception of Black Marxism, what the left has historically been unable or unwilling to consider is that, as a structure of oppression, race runs deeper than class.

Marx’s masterful hermeneutic shift from contract to class involved leaving behind the realm of exchange – wherein all things were of equivalent value and all transactions were equitable – and entering into the realm of production – wherein value was consistently expropriated and relations were exploitative. Nevertheless, in the colonial world, Marxism was more often used as a weapon for struggle and less so as a faith to guide contemplation. One reason for this engagement is that class exploitation never quite explained the reality of oppression experienced under the colonial exigencies of the world market.

In truth, Marx did not shift his hermeneutic far enough from liberalism and its obsession with civil society. Specifically, Marx’s shift takes place within the cognitive realm of civil society and not through that variegated land, sea and air of the world market whose substances have been (re-)connected through European colonialism in its many and continuing articulations. For Marx, the realm of exploitative production was the bedrock of civil society (being the realm of equitable exchange). However, the kinds of oppression practiced in the world market always greatly exceeded – and still greatly exceed – civil society’s foundations of exploitation.

In fact, more often than not, the capitalist engineers of civil society made no pre tense of expanding its realm so as to conquer the world market on behalf of a polite form of possessive accumulation. Rather, the colonial expropriation of land, labour and human bodies has always been structured through the racialisation of humanity. Whose land, labour and bodies can be extraordinarily expropriated and dispossessed through colonial rule? That is the question to which race provides the rule by which to answer. And, being that it informs the rule of coloniality in not just extractive production but in human reproduction, race is intractably gendered.

Class, as a relation of exploitation, is a part of the colonial structure of oppression, but by no means its fundamental articulation. Exploitation in Marx’s labour theory of value pertains to the differential value between necessary labour (for the worker’s reproduction) and surplus labour (for the profit of the capitalist). Necessary labour is relative to the living standard in any particular society. Hence, German car workers, with a high standard of living (relative to most other societies), are some of the most exploited workers because of the value that their labour power injects into the manufacturing process.

Within the structure of Marx’s argument, it might be logical to argue that German car workers are amongst the most exploited. But let us dwell not just on the morality but also upon the political adequacy of this measure of value as we imagine the kinds of accumulation practiced in the world market past and present. This (neo-)colonial market has for a long time been structured along racial lines that determine what lands can be expropriated, what peoples can be worked to death and what bodies can be killed, allowed to die, or kept alive but imprisoned in a state of social death. Exploitation is inadequate to describe this structure of oppression. Rather, class exploitation sits beside – perhaps on top of – racialised practices of expropriation, dispossession and dehumanization that are extraordinary to civil society but not to the exigencies of the world market.

In the famous section 8 of Capital Vol.1 on “primitive accumulation” Marx suddenly brings the constituencies of racial oppression into view. But it is strangely detached from the matter that precedes it both in terms of a dialectical presentation of the commodity form and a narrative of struggles by the English working class over their exploitation. In fact, Marx’s allusions to colonial expropriations of land and to Atlantic slavery seem to provide the historical-materialist presuppositions that legitimise the entire preceding argument. It is as if, having identified the exploitative bedrock of a provincial civil society, Marx remembered the stunning and poetic vision of global oppression that he and Engels had utilized for the Communist Manifesto. 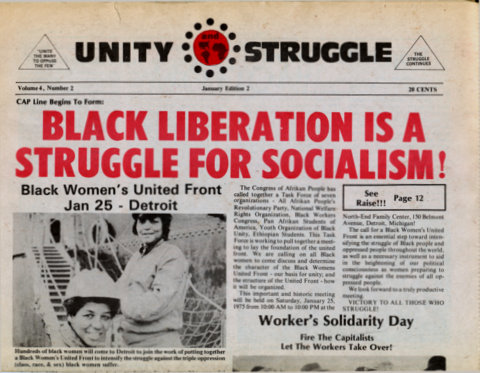 Taming this vision on behalf of a faith in dialectics that underpins the Capital volumes, Marx offers a romanticist and not materialist concept: the expanded reproduction of capital. With this concept proffered, an idealistic hope is also offered: the subsumption of all social relations under civil society provides an immanent possibility for the emancipation of humanity from irrational exploitation. In the contemporary crisis, such hopes appear, once again, to be indulgent. Meanwhile, the most incisive interventions in Marxism have always come from those who have cut through this thin hope, even if it is despite their own faith.

Class exploitation sits besides – on top of, perhaps after – practices of expropriation, dispossession and dehumanization. These practices form the structure of oppression that is known as “race”. Race is intractably gendered as its structuring practices work on the reproduction of humanity into those peoples who will experience extraordinary oppression and those who will experience normal exploitation. Therefore the question prompted by the machinations of the current crisis is this: which peoples will remain within or fall into which camp? The answer lies in a struggle which has as its empirical ground-zero not civil society or the factory floor, but wherever women are working against the weight of the world.

2 thoughts on “Colouring Lessons: Race Is A Structure Of Oppression, And Is Alive And Well”