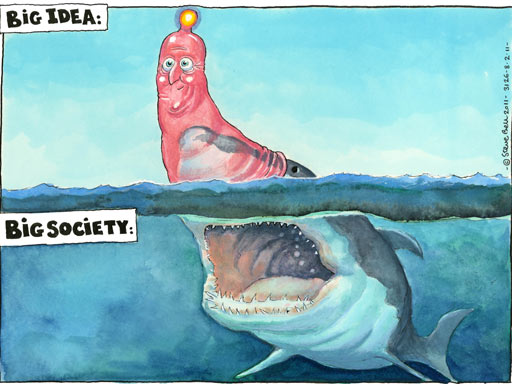 Today the Arts & Humanities Research Council responded to yesterday’s piece in The Observer claiming that the government had readjusted the rules (specifically The Haldane Principle) to increase their control over the direction of research in the UK within the state’s ‘national priorities’. Shorter version: the Tories didn’t pressure us, we’re completely independent and the funding to ‘The Big Society’ is coincedental.

Iain Pears is on the case. As he notes, it’s simply not convincing that the approved language suddenly appeared in the relevant documents unconnected with the political agenda of the governing party. The pressure may have been implicit, and the relationship might have been more informal and complicit than hierarchical, but the consequences for research are much the same.

But the AHRC not only wants to defend itself from these specific charges but also to maintain the legitimacy of the government setting overall priorities. Once again, the exact mechanics are expected to be taken on trust. Indeed, in 2009 a Commons Select Committee (Innovation,  Universities, Science and Skills, since you asked) addressed this exact point. While agreeing ‘in theory’ that the government had a role in setting overarching strategy, the relevant MPs (hardly a selection of Parliamentary rebels) put their collective figure on the aspects of policy that still concern us most:

Logically, the Government cannot support both the Excellence and Haldane Principles in their current form and be responsible for promoting science and engineering as a means of economic recovery and growth in the regions. The time is ripe for an unambiguous rationalisation of the two concepts.

Moreover, uncertainty about how pretty promises and assurances work out in practice was as at stake under Labour as under the Tory-Liberal coalition today:

The Government’s refusal to give us confidential access to papers relevant to this inquiry is unacceptable. Without seeing the Science Budget Allocation letters, we are forced to speculate that the Government has exerted inappropriate influence over the Research Councils. However, we have been unable to confirm or deny this suspicion because of the Government’s contempt for Parliamentary scrutiny.

This strategic ambiguity is vital to the whole operation. The AHRC are thus unsurprisingly silent on this issue. Since the government itself says that is has ‘clarified’ the Haldane Principle, and since that clarification includes some further ambiguity on how (and how much) national priorities will feed into research, it is not at all unreasonable for academics, wannabee-academics, and concerned allies to seek clarification and to counter any and all attempts to subsume research excellence to the requirements of state. It is, in fact, essential. Pears again:

Impact will be bad for the sciences, but for the humanities it will be cruel. The intellectual bankruptcy of what is coming can be gauged by a pamphlet produced by the British Academy last June. A short text published in defence of the humanities used the word ‘impact’ 64 times, and highlighted a Humanities for Business programme offering modules to companies like Unilever on topics such as Machiavelli and entrepreneurial success, Rousseau and modern marketing, and inspirational leadership in Shakespeare’s Henry V. Hefce’s pilot assessment noted with approval that one researcher had been called ‘the next David Attenborough’ in the Radio Times, and that the work of another, involving a Henry VIII Twitter feed, had led Which? magazine to name Hampton Court as a Top Heritage Day Out. The future, it seems, lies not in original research, still less in teaching, but in consultancy work, journalism and guided tours.

One thought on “The AHRC Writes Back (Kind Of)”