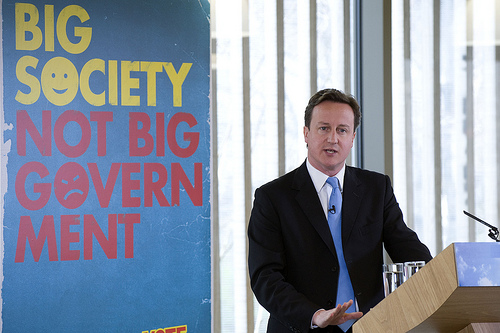 One of the principle battle-cries of the education movement has been that the coalition’s plans amount to a privatisation of the university system. This conclusion is arrived at by a focus on the withdrawal of teaching funding and the increased role given to ‘good relations’ with the private sector. These criticisms stand, but they repeat a common misunderstanding of the neo-liberal project as merely removing the state (call it the laissez-faire fallacy), rather than reorientating the state in a particular way to benefit certain sections and classes of society. The government is obviously complicit in promoting such tropes, which reinforce its narrative of supporting the grassroots and entrepreneurs and civil society and volunteers and champagne and candy for everyone. Hence their frankly playgroup standards of messaging. The Big Society is yellow and smiley-face! The Big Government is red and angry-sad-face!

But we now learn that the government has settled on a rather interventionist approach to all the lovely knowledge we are tasked to produce. ‘Two-minds’ Willetts has decided that the Arts & Humanities Research Council will be allowed to distribute £100 million in research monies each year, but only on condition that it accepts a ‘revision’ of the Haldane Principle (“that decisions on individual research proposals are best taken by researchers themselves through peer review”) and so spends a ‘significant’ amount of that money on research into the Big Society. Under the new ‘understanding’, the government continues to ‘value’ and ‘recognise’ the importance of academic independence, but wishes only to propose the merest of commonsensical adjustments:

At the other end of the spectrum there are decisions that ultimately must be for Ministers, albeit informed by external advice; these include the overall size of the funding for science and research and its distribution between the Research Councils, the National Academies and Higher Education research funding. In addition, every Government will have some key national strategic priorities such as addressing the challenges of an ageing population, energy supply or climate change. The research base has an important role to play in addressing such priorities and the Research Councils, with the support of independent advice, have proposed research programmes to tackle them. It is also appropriate for Ministers to ask Research Councils to consider how best they can contribute to these priorities, without crowding out other areas of their missions. But it is for the Research Councils to decide on the specific projects and people to fund within these priorities, free from Ministerial interference. Similarly, Ministers have a legitimate role in decisions that involve long term and large scale commitments of national significance.

The overall mood is civil-service vague, but elements of the language are importantly precise. The purpose of research funded under this model is not just to ‘address challenges’ or ‘tackle’ issues, but to contribute to priorities. At least one (major) part of the process of research is thus circumscribed in advance. Academics cannot critically assess the government’s priorities and expect to be paid for it. In the case of ‘The Big Society’ as an object of study, research proposals suggesting a genealogy of the concept and a critique of its unstable, and submerged, ancestry will not be eligible. Telling the state that its basic approach is misguided falls outside the relevant scope conditions. A doubled mechanism of control: not only will research in pursuit of the priorities of governance be incentivised, but research against them will be newly excluded from consideration.

How did we get from ‘cleaning up uncertainty’ at the end of 2010 to an imperative to follow the political objectives of power today? The revisionist statement gives examples of what such ‘national priorities’ may be (doubtless selected for the uniformity with which they will command support), but provides no clue as to the threshold conditions or point at which such benevolent management must cease. ‘External’ advisers should be consulted, but have no sovereignty beyond the whim of Ministers. How much funding can be organised according to the national priorities? Are there any priorities or agenda items which might not be suitable for the recruitment of academic excellence? Government departments will simultaneously be the ‘ultimate’ decision-makers and not meddle in academic autonomy, but what are the mechanisms and procedures to tell one from the other? I think we should be told.

The pattern seems to resolve itself into an assault on two fronts. On the familiar ‘private’ side, academics must do more to stimulate the economic success of British business interests and to create suitably ‘transferable’ knowledge, which is to say thoughts amenable to commodification. On the neglected but no less insidious ‘state’ side, academics must service the priorities of the state. Cabinet members will not interfere directly (which I guess means you won’t have to file reports with the government itself explaining how you have advanced its interests) but the requirements will be clear enough (perhaps through some helpful annual lists of priorities). The vector of enforcement is to be permanent under-funding, not least because the short-term justification of ‘crisis’ morphs with ease into a forever ‘reform’ of the now-industry.

This is not surprising given the contours of contemporary Cameroonism. As Richard Seymour so succinctly argues, the superficially new Conservatism of progress and meritocracy covers (just barely) a rather older agenda. Moreover, following Ted Honderich, the blueprint for education mirrors the well-trodden path of Toryism as an organised political project over the centuries. Yes, talk of the cuts as ideologically-motivated have their tactical place, but in one sense they give our governors too much credit. ‘Conservatism’ is not united in theory or practice by a nostalgia for the old ways, nor by a commitment to trusted British institutions and liberties, and not even by a love of the entrepreneurial market. The unifying thread is the malleable defence and extension of power and privilege.

The government’s changes to the Haldane Principle are symptomatic. Most offensively, they assume (or imply) that academics would not study matters of importance in the absence of the party in power letting them know, for example, that climate change is worth looking into. No, we require a degree of massaging to draw us out of our dusty seclusion.

But more than that, they should reinforce resistance within the academy. Deference on the ‘inevitable’ cuts might strike some as the most realistic of choices. But Willetts and Cable have shown the ethics of austerity (or what we might call here ‘disaster pedagogy’) involve something rather more expansive. While we continue to wait for more detail on how exactly the fallout of the new regime will be mitigated, the fundamental relations are being reconstituted under the umbrella of need. If academic independence is still to mean anything, we might have to start paying a bit more attention to how we might build the public university.

One thought on “The Meaning of David Willetts: The Future University Between State & Market”