This is the fourth comment, following Laust’s opening post, by Benjamin de Carvalho. Benjamin  is a senior research fellow at NUPI. His research interests are, broadly speaking, between three fields: He works on issues of broader historical change such as the formation of the nation-state in Europe, sovereignty, and the role played by confessionalization and religion.

The other posts for this forum are available here.

Laust Schouenborg invited me to take part in this symposium on his latest book, a request I was thrilled to accept, given that the book had for some time already been on the list of books I wanted to read. Having now read and engaged with Schouenborg’s work, I am very glad I accepted.

International Institutions in World History (IIWH) is an ambitious and thought-provoking work, which I would recommended to any scholar of IR seeking to understand not only the world beyond the state, but also our current predicament. I found his emphasis on social institutions stimulating and on the whole convincing, and really believe he is onto something. That being said, as he himself concludes, the book marks the beginning of an endeavor rather than its end. And as is the case with any broad claim, the proof of the pudding lies in the eating. Schouenborg’s three cases, while illustrative of his claim about the “universality” of his institutions, nevertheless leave something to be desired. Granted, nomad Central Asia, Polynesia, and the Central African rainforest are pretty much as remote places as one could have picked to engage on such a trip of discovery from New York and Roskilde. And if his framework of international institutions can be found (or even be useful in analyzing) there, then they must be at least fairly universal, is the thought. But then again, while illustrating their occurrence, their utility to the analyst is to me still a bit unclear. While it does structure his accounts, it seems to me that the analysis could have been brought further. Furthermore, for the whole framework to knock out the state (or polities, for that matter) altogether, the book would also have had to tackle some more common cases and demonstrate its utility by superimposing the findings to those of other works in a more sustained and systematic way.

I will therefore end the accolades here, and engage in the friendly fire promised in the title. My coming to this part relatively early in this essay has little to do with my assessment of the book and Schouenborg’s argument. Like the other authors in this forum, I applaud his achievement and sympathize with his ambition. Yet, unlike the other authors in this symposium – including Schouenborg – I don’t have that many problems with the state. Of course, my understanding of the state may not be as rigid as the one Schouenborg is fighting in the first pages of the book, and bears more resemblance with the loose ideal-type he suggests in his conclusion. But that is precisely the point. If we can do with the state, why do away with it? While it may be true that Liechtenstein and Luxemburg are states which have little in common with the US, it remains a fact that they are both polities (sic.) which compare themselves to states and identify as states – just as the US does. Another important question relates to the variation between states today compared to the variation between an “average” state today and a historical one. Is that difference more striking than between different states today? In so doing, we may find that from around the sixteenth century, a claim which Schouenborg seems to agree with, we can indeed speak of a fairly consistent match between the concept of the state and the state in practice – even given the big difference between states such as the ones mentioned above. 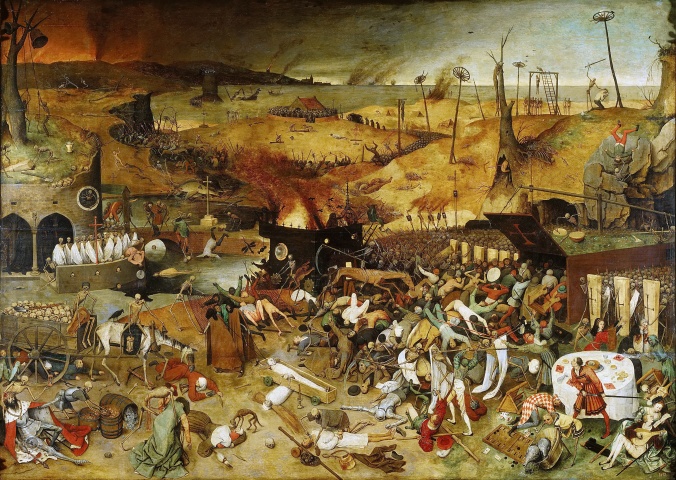 Pieter Brueghel the Elder, “The Triumph of Death”

But the period before that is also what Schouenborg is most interested in, which, granted, makes his emphasis on social institutions all the more fitting. This is also the period Yale Ferguson and Dick Mansbach’s Polities aims to help us analyze. My initial hunch when reading Schouenborg’s critique of Polities is that it was ad hoc and rather hesitant. Having read both Schouenborg’s book and Yale’s comments in this symposium, that first impression sticks. Yes, a focus on social institutions or functions is a great way of undertaking long-term comparative work on units which may not look much like each other. But so is the concept of ‘polities.’ In the end, I am left with a lingering feeling that it may have been a good idea to lean more on Ferguson and Mansbach and supplement rather than supplant polities with a stronger and more structured understanding of social institutions.

Such an endeavor would have taken Schouenborg to historical sociologists who– like him – were concerned with accommodating ‘universal’ institutions of functions within a state-model. I am thinking of Stein Rokkan here, whose ‘diamond model’ of state formation was built on combining Talcott Parsons’ structural differentiation of societies with Albert O. Hirschmann’s conceptual apparatus of exit, voice and loyalty. This allowed Rokkan to account for variations and change in the transformation of polities. Such an engagement would have given Schouenborg the chance to engage with change in a way that his current framework does not allow for. Schouenborg agrees that IIWH is just the beginning of his endeavor to understand politics beyond a state-centered framework, and I believe he would also agree that the continuation of such a voyage needs to tackle the question of change head on. He would do well to engage with Rokkan’s spin on Parsons and Hirschmann – and perhaps even also more broadly with Charles Tilly’s writings from the mid-1970s.

I would also have welcomed a more thorough historical engagement with his cases. Granted, there may be few texts to engage with on nomad Central Asia, Polynesia, and the Central African rainforest, and as such the historically-minded IR scholar has only a few points of reference which can help develop her conceptual apparatus. But such a treatment is not unproblematic. History – even the one written by Proper Historians – is full of biases. These biases, then, inform the IR scholar’s take on her cases. Of course, in the present case, archival research or an engagement with primary sources may have been too onerous, impractical, or even impossible to fund. Yet, it becomes all the more clear that such limitations need to be balanced by a more thorough engagement with the historiographical debate. Historians disagree too, and that disagreement, those choices, perspectives and points of view, need to be reflected in the IR scholar’s text as well for it to convince the reader of the usefulness of a new conceptual framework for making sense of faraway events in faraway places in a faraway time.

Finally, let me return to the state in concluding these comments. While I sympathize with Schouenborg’s wish to establish a conceptual framework for undertaking large-scale comparisons and making sense of historical cases beyond a narrow statist framework, I am unsure about whether we need to abandon the idea of a political unit altogether, when a relaxed framework of the state could possibly do the trick. As hinted to above, such an emphasis could even be greatly improved by supplementing it with a stronger focus on specific social institutions – a modified ‘Rokkan’ framework, so to speak.

That being said, I think we need to be clear about what and when the state is. The state emerges in Europe at some point during the sixteenth century and with that emergence political authority acquires a specific territorial quality. The territoriality of the state is of such importance to the state that it would make little sense to understand states without taking it into account. To me, that is the litmus test of whether we can call anything a state. Without territoriality, we should not speak of states. This is probably where I agree the most with Schouenborg. We should not speak of states before the state.  But does it follow that we should lift the focus away from the political unit altogether in favor of social institutions? Or would we be better served using the framework he outlines so well in IIWH to supplement a focus on a political unit through a concept with much less conceptual baggage than the state, for instance the polity?

de Carvalho, Benjamin (2016) “The Making of the Political Subject: Subjects and Territory in the Formation of the State” Theory and Society 45(1): 57-88