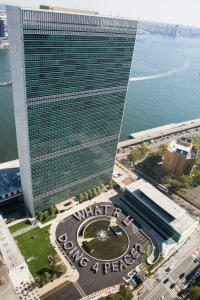 This essay is a much abridged and lightly edited version of an article of the same name by Paul Kirby and Laura J. Shepherd published on 8 March 2016 in International Affairs.

UNSCR 1325, the foundational resolution of the eight that form the Women, Peace and Security (WPS) policy architecture, has strikingly few critics – or, at least, few who would openly dispute its headline ambition: to achieve global gender equality. It seems particularly appropriate to celebrate the WPS agenda on International Women’s Day, adopted by the United Nations in recognition of the ongoing global struggle for women’s rights. Our modest contribution to IWD celebrations this year is the launch of a special issue of International Affairs, which documents the advances and limits of the WPS agenda. These are traced in the various articles across multiple registers, from the implementation of WPS principles and provisions by regional organizations to the heteronormative dynamics of participation, prevention and protection. And yet, as the contributors show, the much-noted gap between WPS ambitions and current realities is not merely a report on imperfect implementation: rather, it takes us to the heart of what the WPS agenda is, and what it might become.

In our article, we discuss various elements, or ‘pillars’ of the Women, Peace and Security agenda, to evaluate where gains have been made under the auspices of this architecture. The ‘pillars’ are generally identified as ‘protection’, ‘participation’, ‘prevention’ and ‘relief and recovery’, with a fifth – the normative dimension – sometimes included. WPS principles govern activity in each of these domains. Women’s participation in peace agreements, for example, is somewhat more consistent than it was before the WPS agenda was inaugurated, and yet remains disappointing given initial ambitions. From 2005 onwards, there has been a notable increase in the number of peace agreements dealing with multiple aspects of gender security and participation.  The 2015 global study on the implementation of Resolution 1325 found that the proportion of peace agreements since 2000 making reference to women was 27 per cent, more than double the level over the period 1990–2000.  Given the emphasis in the WPS agenda on women as both makers and beneficiaries of peace, this trend towards inclusion is clearly welcome. Yet, as Radhika Coomaraswamy and her colleagues observed: ‘The present programmes put forward by the international community tend to be extremely narrow: just to bring a female body to the table’. 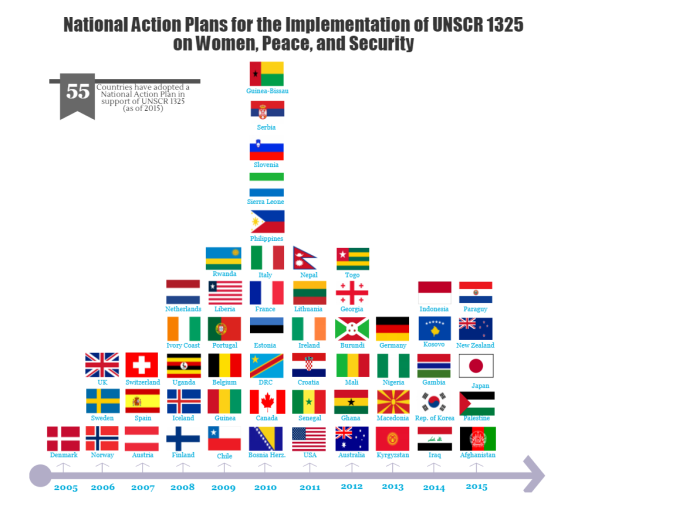 This state of affairs is also reflected in the relatively slow and limited development of national action plans (NAPs) on women, peace and security. It is worth noting at this point that the rate of NAP development by member states in the UN has slowed since 2010. There was a marked increase in NAP development from 2009 to 2011, around the ten-year anniversary of the passage of UNSCR 1325, but since then progress has been disappointing, with some UN member states displaying out-and-out resistance: China and Russia, permanent members of the Security Council and thus authors, in some sense, of UNSCR 1325 itself, have not yet developed NAPs, while other states—many of them major contributors to peacekeeping and political missions, such as India, Bangladesh and Jordan—also lag behind. In some cases, NAP adoption is overtly instrumental: Australia, for example, developed its NAP at the same time as it made a bid for an elected seat on the Security Council (a bid which was successful, Australia serving a term of office in 2013–14) and New Zealand launched its NAP to coincide with the 2015 High-level Review of UNSCR 1325 implementation, with its own seat secure for the 2015–16 term.

Diverse measures can track ‘success’ in incremental terms, but to better grasp the underlying struggles over the meaning of WPS, it is worth exploring tensions within the agenda, in both principle and purpose. One such tension in the WPS policy architecture, however, is the perceptible narrowing of the agenda around the issue of prevention of, and protection from, violence. If UNSCR 1325 is excluded as the foundational resolution from which all pillars of the WPS agenda derive, then in quantitative terms alone there is a stronger focus on violence prevention and protection issues than on women’s participation in peace and security governance. Where country reports to the Security Council incorporate WPS concerns, however, these are again skewed towards discussion of conflict-related sexual violence (CRSV).

On the one hand, there is an obvious need for robust policy responses to the widespread problem of CRSV and for initiatives to prevent such violence from occurring.   On the other hand, a narrowing of the WPS agenda to the exclusion or diminution of participation issues risks losing the critical significance of articulating women as agents of change in conflict and post-conflict environments, and as both rights-bearers and rights-protectors in peace and security governance.  A restricted (or, to put it more generously, precise) focus on conflict-related sexualized violence also precludes recognition of the ‘continuum of violence’ that characterizes the lived experience of many individuals whose lives are marked not only by the ‘extraordinary’ violence of ‘rape as a weapon of war’,  but also by the everyday forms of violence that occur everywhere and may be more prevalent in inequitable and unstable societal environments.

A second tension relates to the charge of state-centrism in the WPS agenda. Although involving civil society in some ways, the consolidation and implementation of WPS principles at national and international levels have become increasingly focused on state responsibility and action. One study from 2014 reports that only about a third of NAPs specify civil society involvement in their planning and drafting, while about 45 per cent mention some form of non-specific civil society involvement.  This is a dismal record, given the foundations of the agenda in women’s civil society organizations and the transnational feminist activism that created the opportunity for the passage of the first WPS resolution.  The consequences of excluding civil society organizations from the NAP development process include a separation of WPS principles from the lived experiences of individuals within the state in question, a lack of grounded understanding of community needs related to WPS provisions, and a lack of recognition of forms of community knowledge in the development of the plans.

There are tensions also in the possible futures of the WPS agenda. In each of the possible futures we outline, a tension exists between the advancement of the WPS agenda and its dilution, with the prospects for each heavily dependent on underlying conceptions of what gender equality means, and how it can be made manifest. The futures embody the tensions we identify in our analysis, and bring other tensions into being. We explore the possibilities of a discourse on ‘Men, Peace and Security’, where the challenge is to reconcile elements of complementarity with those of contention. We examine the diffusion of WPS across a new range of policy actors, such as regional organisations and private military and security companies, where the opportunities of pluralization are matched by the risk of themes instrumentalized for purposes perhaps dramatically at odds with the overall WPS vision. And we gesture towards the historic ambition of a radical WPS, though there appears to be a gulf between a fundamental (even a fundamentalist) critique of global order and the ability to concretely hold states accountable for the commitments they made in Resolution 1325 and its successors.

In each case, the ability of the Women, Peace and Security agenda to advance the status of women globally, to achieve peace and to recreate security depends on the ability of a range of actors (here expanding, there shrinking) to work both within and beyond the bounds of politics as usual. It was ever thus. In the ebb and flow of policy and funding, and within the bureaucracies of global governance, the horizon for change may often appear to be the daily practice of world affairs. The conceptual framing of WPS as a fundamental challenge to contemporary global order will be equally important. And it is that standard, over the next 15 years and in the decades beyond, by which the Women, Peace and Security agenda will have to be judged.

4 thoughts on “The Futures Past of the Women, Peace and Security Agenda”