A guest post from Loubna El Amine. Loubna teaches political theory, with a particular focus on early Chinese political thought at the Department of Government, Georgetown University (her teaching was mentioned on this blog last year).  Before Georgetown, Loubna was a postdoctoral fellow at the Whitney Humanities Center at Yale University. She holds a PhD in Politics from Princeton University and a BA in Political Studies from the American University of Beirut.  Classical Confucian Political Thought: A New Interpretation (Princeton University Press, 2015) is her freshly pressed first book.

I recently wrote a book. Its cover is (very) red and features an ornate golden doorknob shaped like the face of a lion. I have always dreamt of writing a book. The experience of seeing one with my name on it fills me with a combination of delight and incredulity. I am sure all first-time authors experience a similar feeling. In my case, however, the feeling is heightened by the sense that I wrote a book that, for the first two-thirds of my life, I could never have even conceived of writing.

The book is on early Confucianism in China, and I did not know anything about China until I was twenty. China was so foreign to the intellectual, political, and cultural world in which I grew up that the two ways in which it was usually mentioned were the proverb, often attributed to the prophet Muhammad, which says “Seek knowledge, even in China” and the description of anything that sounded incomprehensible as Chinese (the Arabic equivalent of the American “It’s Greek to me.”). More mundanely, there was only one Chinese restaurant in Beirut when I was growing up, a small, family-owned place called Rice and Spice (today there are many more, with names ranging from Chopsticks to Wok Wok). 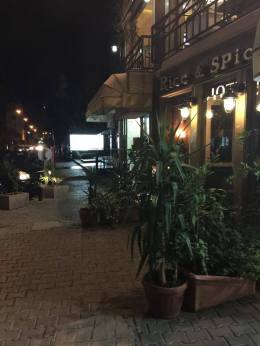 Although I studied political science as an undergraduate at the American University of Beirut, the curriculum rarely covered areas beyond the Middle East, and when it did, it only reached as far as Europe. It was only because of one professor, Yahya Sadowski, that I discovered China. He taught courses on global political economy and on development in the Arab world, and frequently cited both East and Southeast Asian countries as case studies. When I started graduate school in the US, I decided to explore East Asia further. This exploration took a few twists and turns, and I finally landed, having foregone empirical for philosophical pursuits, in the intellectual world of 3rd century BCE China.

Every once in a while, someone describes what I do as “contrarian,” “crazy,” or “looney.” I never know quite how to react. The description is, in some ways, true. I studied Confucianism because it spoke to me and because I was intrigued by it, but I also sometimes wonder whether I studied it because I did not want to study the Middle East. I sensed that it was expected of me that, as a non-Westerner, I study my own region. This expectation bothered me. When people now call what I do “contrarian,” this only reminds me that the expectation is still at play. Not that I think that there is anything wrong with someone from the Middle East working on the Middle East, just as there is nothing wrong with someone from the US studying the US. The problem is simply that no one thinks it is contrarian or crazy when Americans or Europeans choose to study societies other than their own.  In other words, my worry is that the surprised reactions I get about my work point to the existence of an unconscious bias, generated and maintained by the current make-up of academia, against the ability of non-Westerners to produce knowledge that is not about ourselves. We cannot transcend, like our European and American counterparts can, our own world. We are our own case studies, so to speak. This means that if we are successful at studying our own regions, the success is likely to be attributed to our “inside knowledge,” rather than the work itself. It also means that when we do happen to study a topic that is seen as “Western,” say European philosophy, the default assumption is that we do so from the standpoint of our colonial experience. And finally it means that studying another non-Western region is simply “contrarian.”

Though it has not happened to me personally, friends of mine from Lebanon have reported being encouraged, even if gently, to focus their doctoral work on Lebanon, the Arab world, or Islam. Other friends who have chosen to work on the Middle East have complained about their work being mislabeled to the same effect, its theoretical import downplayed in favor of its ‘regional flavor’. I have also heard of new professors being encouraged to teach courses on topics that they do not necessarily work on (who else is going to teach Islamic philosophy but the new Iranian professor?!). And my suspicion is that this arrangement also likely guides decisions on admission to US and European PhD programs in the humanities and social sciences: if you are from a non-Western country, you are more likely to get accepted if your work is directly related to the geographic area where you are from.

This expectation also feeds into the way in which academic institutions in non-Western countries are framed and present themselves. When I inquired some years ago about what it would take to be hired at the American University of Beirut, I was told clearly that I would need to shift my work toward Islamic thought. Middle Eastern and Islamic studies are, after all, AUB’s claim to fame, the primary reason it is able to place graduate students in American and European institutions and to attract foreign MA students. It was also telling that, when in Seoul this past summer, my work was described by a couple of people I met as the “Islamic view of Confucianism.” The equivalent here would be to describe American and European work on China as representing “the Christian view.” But while this sounds as odd as it is problematic, it is actually not much different from the charge of contrarianism: both descriptions belie the need to place me back into the world in which I grew up. I absolutely love the world in which I grew up, but I would like to think that, like my Western colleagues, my intellectual horizons are not limited by my place of birth.

2 thoughts on “What Is It Like To Be Lebanese And To Work On China?”