So unless you were unplugged last week (and it’s fine if you were, I’m not judging), you would have seen the hashtag #takedownjulienblanc trending on Twitter. Julien Blanc, to whom the hashtag refers, is a self-styled ‘Pick Up Artist’ who charges actual money – between one thousand and three thousand dollars, by all accounts – for the privilege of listening to his advice on how to ‘pick up’ women. For the privilege of listening to his white, male, privilege, actually, given that the (TW) video that caught the attention of the activist community showed Blanc assaulting Japanese women in a highly sexualised way and commenting that ‘when you go to Tokyo, when you’re a white male, you can do what you want’.

Blanc was clearly paying attention in class when they studied Peggy McIntosh’s ‘invisible backpack’; the trouble is, he thought it was a primer rather than a cautionary tale. This is not the only time Blanc has confused genres in this way. Earlier this year, he tweeted a chart mapping out various abusive relationship dynamics, from intimidation to coercion and threats, with the caption ‘May as well be a checklist’ (though the image has since been taken down, along with Blanc’s entire Twitter account). Blanc’s website actively encourages men to use ‘male privilege, isolation and emotional abuse’ to attract women.

Imma #TakeDownJulienBlanc if I have to do this shit myself. THIS ASIAN GIRL AINT HAVING NONE OF YOUR WHITE FUCKBOY SHIT

Li has explained why she started the hashtag, saying that she was moved to start the hashtag because Blanc is actively perpetuating ‘toxic masculinity’, sexism and racism through his website, social media usage, and ‘Real Social Dynamics’ seminars. The hashtag existed, as all hashtags do, to catch the attention of Twitter users, to make explicit Li’s critique of Blanc and to encourage other Twitter users to do their own research into Blanc and his vile misogyny so that they might support efforts to get Blanc’s seminars shut down.

Dear readers, it worked. Li started the hashtag on 1 November 2014. The tag began to trend on Twitter on 2 November, was picked up by mainstream media outlets in the days that followed and by 6 November action had moved into the meatworld. About three hundred people gathered in Melbourne, Australia, to protest the possibility that Blanc would hold one of his seminars in the city, despite the fact that the hotels scheduled to host the seminars withdrew their support after they were apprised of Blanc’s tendency to incite sexualised violence. 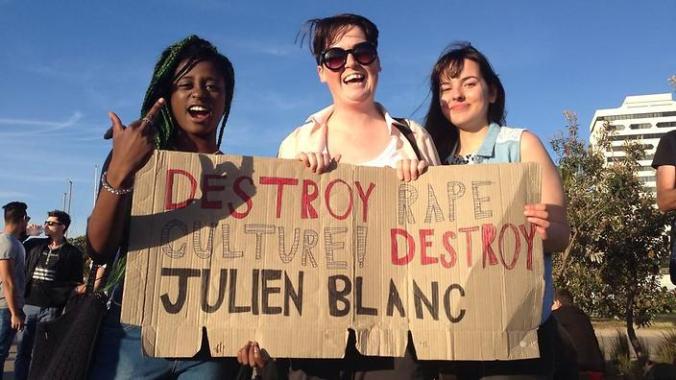 On 7 November, the Australian government confirmed that Blanc’s visa had been cancelled, meaning that he had to leave the country immediately. In a follow-up piece for the British newspaper The Independent, Li celebrates the fact that the activism led by #takedownjulienblanc has ‘shut down events in Melbourne, Brisbane, Austin, and Seattle, … Eventbrite have stopped hosting his events’. As I sat down to write this blog, online hacktivist collective Anonymous tweeted that Blanc’s Twitter account was ‘tango down’ (referencing the elimination of a terrorist threat).

All of which brings me to my point: we should be joyful, we should rejoice, we should celebrate. We should even REJOICE in shouty caps-lock BECAUSE THIS IS A WIN, PEOPLE. Getting Australian hotels to withdraw their venues from Blanc’s seminar circuit, getting Australia’s Minister for Immigration and Border Protection Scott Morrison (of racist asylum seeker policy fame) to cancel Blanc’s visa: these are victories in the ongoing battle against relentless, everyday sexism and gendered violence.

And we don’t celebrate wins enough, not even little ones. Professionally, barely even personally, we don’t celebrate enough and we don’t rejoice. We spend a lot of time, in our studies of global politics, celebrating – through our chosen ‘objects of analysis’ – the mechanics of death and destruction. We obscure the negative emotional dynamics of our scholarship by dressing it up in the language of neutrality and objectivity; we reference ‘collateral damage’ as though this is not a polite fictive rendering of ‘dead people’.

Elina Penttinen has noticed this interesting characteristic of scholarship on global politics: we talk incessantly about war, violence and misery. What happens if we celebrate, rejoice, and enthuse instead? It has the potential to be nothing short of transformative:

Heartfelt positivity or joy as a new methodology (Penttinen 2013), which I propose for feminist International Relations, is twofold in its aims. It is intended first of all as a call to recognize the importance of studying what is working well in the world. It is a call to broaden our scope and understanding of human life in and of this world.

And this is why I want us to celebrate and rejoice. Yes, no sooner did Anonymous report that Julien Blanc’s Twitter account had been deactivated than another popped up, purporting to be the man himself, spouting the same drivel. Yes, forty thousand MRAs and PUAs and other miserable acronyms crawled out of the woodwork to decry The Feminazi Oppression of Poor Jules. But the Canadian Immigration Minister Christopher Alexander has also taken to Twitter to state that Blanc’s values are ‘completely counter to Canadian values and common decency’, and there are active petitions to keep him out of both the UK and Japan.

Activist communities on Twitter and IRL have taken a stand against Blanc’s peculiar brand of misogyny and their hashtag activism has been effective. Whatever your particular beliefs about the supposed extent of political apathy in the digital age (a particular brand of Millennial-bashing that gave us the concept of ‘slactivism’), there is no doubt that

one of the profound benefits of hashtag activism … [is] … The amplification of minority voices that other forms of media — or even other forms of activism — have historically ignored.

In targeting both the venues where Blanc was to perform his ‘training’ and the states that grant the visas to permit Blanc first to enter and then to work while visiting, the protesters have successfully disrupted Blanc’s schedule and – despite ‘his’ protestations to the contrary on the new Twitter account @JulienRSD, which may or may not be genuine – caused no small amount of inconvenience to this creep.

In the digital age, with multi-media connectivity and extensive social networks,

feminism can be in everyone’s faces the moment they open their search engine, check out what their friends are up to on Facebook or see who’s mouthing off on Twitter. And when there are as many attacks waged on women’s rights as there have been recently, that’s heartening to know.

And I, for one, will celebrate that. I will interpret the activism seeking to #takedownjulienblanc as a sign that there are greater levels of political engagement, channelled to positive ends, than we might have been led to believe is possible on Twitter. I will interpret the progressive political moves of even regressive right-wing governments as proof that, like a stopped clock, even conservatives are right occasionally. I will interpret the huge number of allies chipping in to support the activists and advocates on Twitter and IRL as a sign that there are many people fighting feminist battles large and small all across the world every day (even as more celebrities use their moments in the sun to denounce the F-word and all who sail in her, thank you Salma Hayek, last in a long list of offenders). And I will celebrate the hell out of all of that. Join me.