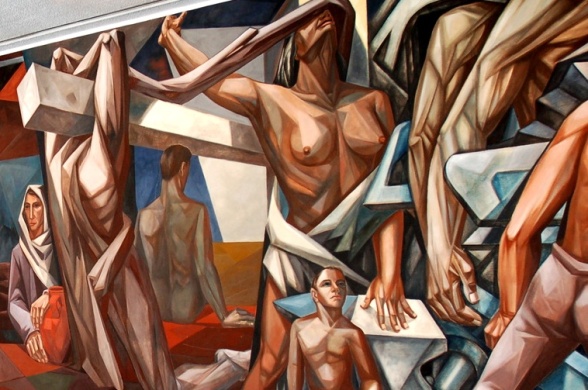 Yesterday, the United Nations Security Council met to vote on a new resolution on wartime sexual violence (under the more general rubric of ‘women, peace and security’). Resolution 2106, as it now is, was passed unanimously, and so joins those other numerical signifiers in the chain of gender mainstreaming: 1325, 1820, 1888 and 1960. The session had been convened by William Hague (the UK holds the Security Council chair for June), and the presence of Angelina Jolie (or ‘Angelina Jolly’, as more than one state representative called her) brought obvious publicity advantages, although that in itself is not so surprising both given her close work with Hague on the UK’s Preventing Sexual Violence Initiative and her role as Special Envoy for the UN High Commission for Refugees.

UNSCR 2106 seems designed mainly as a political symbol that the Council “remains actively seized” of the importance of conflict-related sexual violence, and essentially extends a number of themes already in play (there’s a whole bunch of urges, calls for, recognizes, requests in the text). It seeks the expanded use of targeted sanctions against perpetrators and commanders involved in sexual violence and reiterates the connection of that thing called ‘gender’ to DDR, security sector and justice reforms. It repeats the ‘zero tolerance policy’ on sexual violence and abuse by UN forces, requests further reports on progress to the Council, and so on. There were some other points of note, partly in the mention of men and boys as victims, and partly in some puzzling recessive points such as the Resolution’s demand (its word) that women and children abducted into armed forces be released (given that they are especially vulnerable), with no concomitant mention of kidnapped men.

The resolution also called for sexual and gender-based violence training for all pre-deployment and ‘in-mission’ peacekeeper training, and it is here that perhaps the biggest substantive contribution lies. Numerous references were made in the debate to an expanded role for Women Protection Advisers. Like the discussion of targeted sanctions (mentioned first in UNSCR 1820) this is not brand new, since Women Protection Advisers were themselves an innovation of 1888, which upgraded them from existing gender and human rights advisers. The exact nature of the new role is as yet unclear, but it seems to involve an expansion of their mandate to apply to all UN deployments, since they are currently active in just eight peacekeeping missions (which is just over half).

A few other quick observations on the text and the debate.

First, ‘weapon of war’ narratives are hegemonic. Nearly all contributors to the debate resorted to the language of ‘tactics’ or ‘tools’. William Hague said that rape is used to “tear apart lives and achieve military objectives…in just the same way that tanks and bullets are”.[1] At least three speeches used the phrase ‘bodies as battlegrounds’. The resolution itself is more open, mentioning not just “method or tactic of war” but also any use “as a part of a widespread or systematic attack against civilian populations”, which more closely captures the diversity of forms. One of the problems of this framing was clear in the comments of the Rwandan representative, who suggested that the simplest way to end conflict-related sexual violence was to end the conflicts, since they were the cause, thus neglecting the continuum of gender violence and the problem of the post-war (topics neatly picked up by María Cristina Perceval of Argentina, who spoke of wartime gender violence as “a savage extension of daily violence” and as “woven into the social fabric”).

Second, and relatedly, security justifications were in general circulation. This is in one way not surprising given the setting, but speaks to a debate about the relative merits of securitisation (the construction of certain issues as ones of ‘security’ and, thus, of high politics). Speakers, Angelina Jolie amongst them, were insistent that wartime sexual violence was a “threat to international peace and security”, often by reference to the subsequent damage to economic development and community cohesion. To do so, issues of domestic violence and peacetime practices of violence, although mentioned, had to be pushed somewhat to the background in favour of the field of war. This framing may also be what prompted so many to cite current situations of international conflict, principally Syria but also DRC, in their remarks. One potential consequence of that is that ‘sexual violence’ is simply grafted on to the category of ‘war’, or else risks becoming invisible again, thus limiting a fuller understanding of its dynamics. Others have pointed out that more conventional questions over Syria were able to obscure the complications of gender violence, even on this day. 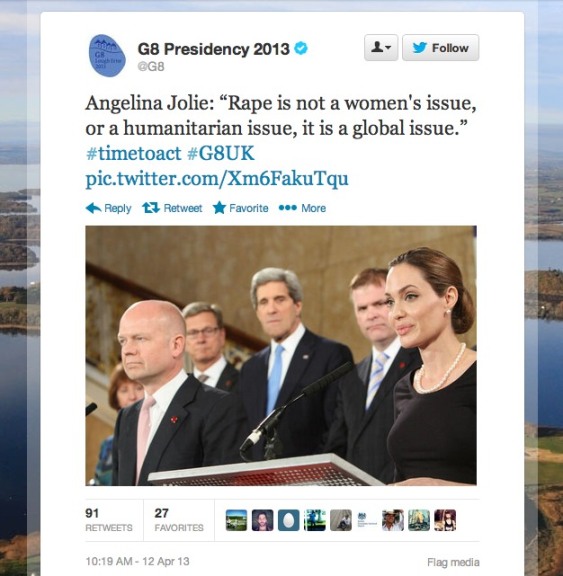 Third, the political agenda is one now strongly focused around “ending impunity”. Although this seems a self-evidently good thing, there are some more fraught questions under the surface agreement. Both the text and the debate emphasised moves towards the prohibition of sexual violence in ceasefire agreements and, more prominently, the exclusion of ‘sexual violence crimes’ from any post-conflict amnesties. This is a clear response to concerns that perpetrators simply change out of military uniforms and enter political power after violence has officially subsided, but it is not hard to imagine strong counter-claims that such blanket rules endanger peace settlements in practice. What happens when giving up arms also means ensuring your own war crimes trial or exclusion from the power elite if your troops have been involved in widespread sexual violence (quite conceivably the case for most parties to most conflicts)? The idea, of course, is that future perpetrators will be deterred, but are we really sure that this will be so? Moreover, it was clear which states wouldn’t have to worry about charges of excessive impunity, if only because the issue didn’t come up explicitly at all. There was no mention, for example, of chronic problems of military rape only now being faced up to in the United States itself (more on that another time).

Fourth, there are other tensions not evident in the unanimous vote. During the debate itself, it became increasingly clear that states were signalling their views on what it really means for war rape to be a matter of “international peace and security”. And they did so in rather predictable ways. China sought “full respect” for national sovereignty principles, which Russia reiterated were “fundamental and indivisible”. The French, who tellingly sent Najat Vallaud-Belkacem, the Moroccan-born Minister for Women’s Rights, as their representative to the debate, claimed in the chamber that the intervention in Mali was motivated, at least in part, to prevent sexual violence (and then avoided some more uncomfortable questions about French policy afterwards). Others also talked up the usefulness of their assorted interventions. Only Argentina insisted on a balance, saying that human rights cannot be “degraded to be used as a Trojan horse for foreign intervention” but that sovereignty cannot either be used a “a shield of impunity” for perpetrators.

A less stark contrast, but one that may well matter more in practice, was over the uses of international law. Should national courts take precedence, or should the ‘complementarity trigger’ bringing in the ICC be set lower? Australia and others seemed to suggest that international mechanisms should be used widely, whilst others emphasised ‘local’ solutions and good practice. This is not a question merely of technical decision, nor of scale, but one fundamentally of political power, not least if expanded international protocols and teams will be gathering evidence to be used directly by the Court and/or collected primarily on official enemies, rather than on all parties accused of gender violence.[2]

Fifth, on implementation, details remain vague. The UK has most visibly pledged its support to the office of Zainab Hawa Bangura, the Special Representative of the Secretary General on Sexual Violence in Conflict (a post itself only called into existence by 1888 in 2009). But whether these resources will be primarily political, or whether there will be a significant increase in funding to gender mainstreaming (and to which kinds of gender mainstreaming in conflict) remains obscure (at least to me). Training missions, further reports, awareness campaigns, shifts in global discourse: all have their value, but the scale of action needed to, in Hague’s words, “confine the use of rape as a weapon of war to the pages of history” will need something more.

Sixth, and finally, there is the muted politics of feminism. Argentina (or María Perceval) was the only participant to mention it explicitly, to acknowledge the contribution of the feminist movement(s) to rendering war rape visible, and political. UN meetings are, of course, fora for consensus statements and subtle signals of disagreement rather than open political contestation (as so well described by Sally Engle Merry). But that does not make the politics go away, and the issues that predated the passage of the resolution – the role of ‘normal’ gender orders in extreme sexual violence; the gendering of political power; the co-implication of race, class, nation, sexuality and the rest with gender violence; and the pathways to social transformation – remain as stubbornly present as ever.

[1] Emphasis added. I transcribed this on the spot, so there may be small errors of detail in the quotations, for which I apologise in advance.

[2] There was also some difference in emphasis over the role of women more generally. One criticism of the increased focus on sexual violence is that it has displaced the role of women as peacemakers and agents, returning them to the status of victims only. And one area of differentiation in the debate was over how much women’s general social status relates to vulnerability to sexual violence.