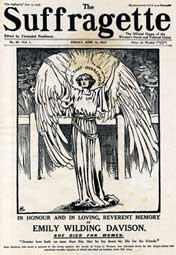 The Morning Post, 1913 – on the violence of the suffragette movement:

Early yesterday morning some women succeeded in burning a valuable house near Trowbridge. In the night of Monday to Tuesday ROUGH’S boathouse on the river at Oxford, near the Long Bridges, was seen to be on fire. It was impossible to save the building or the boats which it contained. Nailed to the bridge near was found a card with the words “Votes for women. No peace till we get the vote.” The presumption is that the boathouse was set on fire, the KING’S horse was stopped, and the Trowbridge mansion was destroyed by some of the females who are discontented with the structure of society. Whether that be the case or not – it is quite possible that the truth may not be ascertained – the action is typical of much that has happened lately and deserves thinking about. Indeed, if we are to believe the leaders of the “movement”, the purpose with which these things are done is to make men think. The question is, What are we to think? The planned and deliberate destruction of property is intelligible as an expression of anger against the owner. But as the wellbeing of society depends upon the security of persons and property against wilful attacks, such attacks are regarded as crimes, and one of the principal purpose for which society is organised is to prevent such acts and to punish those who commit them. But in the class or cases which we are considering there is not motive or animosity against the particular person whose property is destroyed. Those who do them have not the personal hatred which usually explains such doings. If this were an isolated case, if it were found that a house had been wilfully set on fire by a young lady well brought up and accustomed in other respects to behave herself well, a jury would probably come to the conclusion that she was not in her right mind, and the Court order that she should be taken care of until she was restored to complete sanity. But the present case is not isolated. There is an epidemic of the state of mind which produced it; it is but one of a large number of similar cases. This frame of mind cannot possibly be considered healthy. The acts which it produces constitute a war, not only upon society as at present constituted but upon any conceivable state of society because it is impossible to imagine any community of human beings not based upon laws for preserving the security of property as well as of life and society, the propounds of the most astounding schemes for the reconstruction of the community, have ever propounded a plan which would not guarantee the work of and man’s hands against wanton and wilful destruction. The women who go about setting fire to houses seem, therefore to have their thoughts out of gear. In most respects apparently their minds work as other people’s do, but the epidemic of arson appears to be a form of monomania. This quality of the minds concerned noes not disappear under an examination of the alleged motive. These ladies say that women ought to have the same political rights as men, and in particular the Parliamentary franchise, and they assert that women are qualified to be members of the body polite. But it is unthinkable that a person who refuses to recognise the fundamental condition upon which every society is founded can be qualified for membership in that society. The person whose mind works in that way is inaccessible to reasonable arguments.

I do believe that, where there is only a choice between cowardice and violence, I would advise violence… I would rather have India resort to arms in order to defend her honour than that she should, in a cowardly manner, become or remain a helpless witness to her own dishonor. 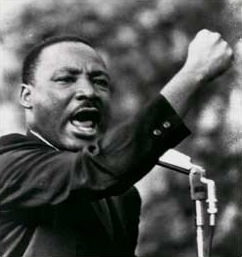 A true revolution of values will soon look uneasily on the glaring contrast of poverty and wealth with righteous indignation. It will look across the seas and see individual capitalists of the West investing huge sums of money in Asia, Africa and South America, only to take the profits out with no concern for the social betterment of the countries, and say, “This is not just.” It will look at our alliance with the landed gentry of South America and say, “This is not just.” The Western arrogance of feeling that it has everything to teach others and nothing to learn from them is not just.

A true revolution of values will lay a hand on the world order and say of war, “This way of settling differences is not just.” This business of burning human beings with napalm, of filling our nation’s homes with orphans and widows, of injecting poisonous drugs of hate into veins of peoples normally humane, of sending men home from dark and bloody battlefields physically handicapped and psychologically deranged, cannot be reconciled with wisdom, justice and love. A nation that continues year after year to spend more money on military defense than on programs of social uplift is approaching spiritual death.

The immediate reaction to the Kent State shootings, 1970.

One thought on “Whitewashing History”