There’s always a surprising disconnect between experience and public reality when you attend an event that goes on to become an “event.” On such occasions, I find myself wondering how my experience can run so counter to the public narratives that emerge. Yesterday’s (10 Nov.) protest march in London is no different.

Here are some media images that reflect the protest I attended: 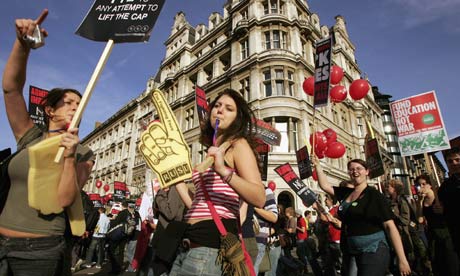 But the images that defined the “event” were slightly different. We’ve all seen them on the TV, in the papers, and on the web. 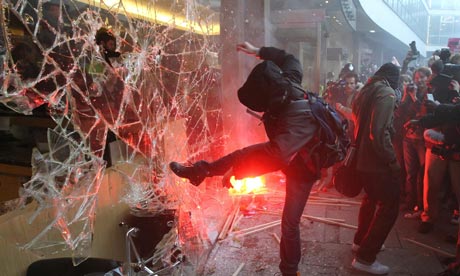 What I don’t want to do is engage in hand wringing over a protest hijacked by violent fringe elements, or tut at those smashing up the office building or gathered outside to watch. Instead, I want to do the opposite, I want to imagine myself as the one who failed, failed to fully grasp that it wasn’t just a sunny afternoon of political play acting. I’ve already written about the global calls for austerity as a threat to democracy and explored the fear that underlies the Conservatives policy (with further thoughts to follow in a third post), but here I want to explore the emotions that motivate the opposition and raise the question of what actions and reactions are justified.

Responding to the occupation and property destruction at Millbank tower, David Cameron provided a predictable response, not only condemning the protestors, but by necessity (given his position) excluding the protestors from the sphere of legitimate politics. He also expresses the indignation and vindictiveness of the “law-abiding citizen” by calling for swift punishment.

“Look, people who assault police officers or who smash windows or who break property they are breaking the law and, yes, those people I hope that they will be prosecuted. They should be.”

“Lawbreaking is not acceptable and I hope that the full force of the law will be used.”

All this is as we would expect, but there’s a funny irony in this particular man being so upset about broken windows, in moralizing about wanton destruction of private property and being so unwilling to tolerate the act of destruction that thrills us in such moments. After all, Dave, surely you know a thing or two about how good it feels to break a few windows.

I have no knowledge of what Dave did or did not break, and there’s little visual evidence to be found on the web of the Bullingdon boys running wild through Oxford. But while we’re talking about windows, here’s a lovely taste of what it is like when the sons of privilege let loose their urge to smash and break – taken from an account of the earliest days of the Bullingdon club:

“The results were disastrous. Drunken and riotous Bullingdon members – sporting the exclusive society’s dress of mustard waistcoats, tailor-made blue tailcoats and blue bow-ties – went on an unprecedented rampage in the college’s hallowed halls, smashing every light in its Peckwater Quad along with all of its blinds, its doors – and all 468 windows. This particularly upper-class brand of internal Oxford self-destruction led to headlines worldwide, and was even reported in the New York Times, which described students as being guilty of committing an “orgie” of destruction that went into the early hours of the morning.”

While it is always relevant to point out that the upper classes pay much less for their sins than do the lower classes, this is not the lesson I want to draw. The children of privilege can break and destroy for many reasons, with any number of tumultuous emotions in their breast, save one – they do not, and in fact cannot, know the destructive urge that comes out of futility.

From The Revolution of Everyday Life by Raoul Vaneigem:

In a gloomy bar where everyone is bored to death, a drunken young man breaks his glass, then picks up a bottle and smashes it against the wall. Nobody gets excited; the disappointed young man lets himself be thrown out. Yet everyone there could have done exactly the same thing. He alone made the thought concrete, crossing the first radioactive belt of isolation: interior isolation, the introverted separation between self and outside world. Nobody responded to a sign which he thought was explicit. He remained alone like the hooligan who burns down a church or kills a policeman, at one with himself but condemned to exile as long as other people remain exiled from their own existence. He has not escaped from the magnetic field of isolation; he is suspended in a zone of zero gravity. All the same, the indifference which greets him allows him to hear the sound of his own cry; even if this revelation tortures him, he knows that he will have to start again in another register, more loudly; with more coherence.

People will be together only in a common wretchedness as long as each isolated being refuses to understand that a gesture of liberation, however weak and clumsy it may be, always bears an authentic communication, an adequate personal message. The repression which strikes down the libertarian rebel falls on everyone: everyone’s blood flows with the blood of a murdered Durruti. Whenever freedom retreats one inch, there is a hundred-fold increase in the weight of the order of things. Excluded from authentic participation, men’s actions stray into the fragile illusion of being together, or else into its opposite, the abrupt and total rejection of society. They swing from one to the other like a pendulum turning the hands on the clock-face of death.

It is easy to denounce the vandalism at Millbank tower; it is easy for official organizers to disown the scenes played on repeat on the news… but what is so sacred about glass windows, office furniture and computers? The truth is, nothing. Absolutely nothing. Yet the easy indignation serves a purpose. It does not just constrain the urge for violence residing under the placid social calm, it acts as a barrier to speaking truths that some amongst us refuse to face. With each passing day – in the UK, Ireland, the US and elsewhere – the evidence mounts: our societies do not belong to us, or rather they belong to us less and less as the gap in power, resources and cash grows.

A young man kicks in a window at Tory HQ, a group of students starts a bonfire, a girl dances in the Millbank lobby and puts her two fingers up – and I’m supposed to shake my head and say “what a disgrace”, or “oh, how they’ve ruined our carefully planned political message,” what a load of bullshit! The more I think about it, the desire to smash the windows through which the powerful look out upon ordinary people seems a healthy and reasonable emotion.

Conor Gearty recently wrote about the value of anger to political action, and his insights are timely. We’re in middle of a moment of profound change – one in which I think the status quo and the powerful are in far more precarious position than we realize – and making the moment of change productive, fighting back in this moment of opportunity is vital and justified – even if it involves kicking in a few windows. I hope the anger of the protestors and the youthful energy they displayed reminds the rest of us that what is at stake is worth fighting for, but I do think we need to heed Vaneigem’s warning about the corrosive effects of isolation – which is why I think it is wrong to treat the protestors as pariahs or unwanted outsiders of a more polite and reasonable opposition movement. That is I think both an ethical and strategic mistake.

There are, however, reasons to be concerned. I was struck most forcefully by video of the student on the rooftop letting off a fire extinguisher before apparently tossing into the crowd below. There’s no way to know the intention (did the extinguisher slip or was it thrown?), but it in the end it doesn’t matter; it was irresponsible and could easily have killed someone from that height. Without wanting to make too much out of a small incident, opposition actions need to be controlled (by organizers and participants, not police) and we need to remember that our anger should also make room for care for others – even when our opponents are less empathetic.

4 thoughts on “Ethics of Austerity 2: Interlude of Broken Glass”