This is the first in a series of posts over the next week on Revisiting Gendered States: Feminist Imaginings of the State in International Relations, released in 2018 as a successor to 1992’s Gendered States. The series combines commentary from contributors to the volume and reflections from others. We at The Disorder are glad to host it. In this first post the book’s editors – Swati Parashar (University of Gothenburg), J. Ann Tickner (American University) and Jacqui True (Monash University) – reflect on the motivations behind the project. The full series may be viewed here. 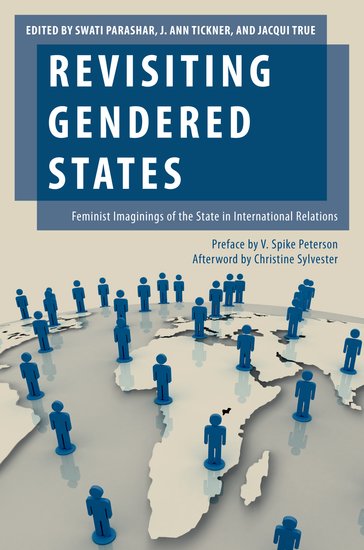 Nearly a decade ago, Jean Elshtain expounded in her International Relations essay, ‘Women, the State and War’ that gendering the state did not alter much, though feminist insights could reveal a thing or two about how the state functions in the Waltzian levels of analysis. As expected, younger generations of feminists did not take too kindly to that (see for e.g. Laura Sjoberg’s response to Elsthain, ‘Gender, the State, and War Redux’). This was neither the first, nor the last time feminists clashed over the merits of ‘gendering’ the state. The debate continues to rage, enabling gendered explorations of the state, its forms and practices.

When we decided to undertake this project, we were aware that the state was a contested zone for feminists. To embrace its many secular ideals and rights-based policy interventions, to reject its policing and violence on non-conforming bodies and its selective bestowing of citizenship privileges, or to remain ambivalent about its future relevance and sovereignty in an era of competitive globalization – these remain the many dilemmas that feminists have explored in their writings about the state. There is no consensus on either the increasing relevance of the state as a principled actors in in global politics or its popular [lacklustre] appeal in a fragmented and broken world where boundaries and sovereignties are hardly stable categories.

The state is back, and yet the state is invisible; the state is violent and yet the state is the hope for many; the state is an end in itself and also the means to achieve political and social objectives; the state is actively opposed and yet it remains an aspirational institution. What marks the appeal of the state? How and why do states embody gendered qualities, emotions and hierarchies? Who becomes/performs/embodies the state? Which persons are citizens of the state and which ones remain the policed subject populations? How can the state be free from the limitations of its own institutional frameworks, to respond to the challenges of the changing times? These were just some of the questions that guided the chapters in Revisiting Gendered States: Feminist Imaginings of the State in International Relations.

We must acknowledge that the project was conceived as furthering the conversations that feminist scholars had 25 years ago with the publication of the Spike Peterson edited Gendered States: Feminist (Re)Visions of International Relations Theory (1992). It was time to assess what the gendered states were up to and how far and in what ways feminist thinking on the state in international relations had developed. What sets apart how feminist International Relations scholars engage with the state from feminist theories of the state in other subfields and disciplines is our reflection on the structural and performative constraints on states in an evolving international system constituted by certain norms and ways of being a state. Those who study the politics of gender, race, sexuality and other forms of identity within a given polity or space often have rich and deep analysis of these dynamics and how the constitute state practices but may miss the striking similarity and difference in other polities and spaces.

In the series of blog posts ahead, we sample the inspiration and dilemmas of three chapter contributors to this edited volume. Christine Agius, David Duriesmith and Katherine Brown provide snapshots of their chapters, while sharing their insights from masculinity, political violence, state identity perspectives of why they think the gendered state is significant to their understandings of global politics. Shine Choi, Megan MacKenzie and Nivi Manchanda review the book and tell us what works for them and where lacuna still exist (and there are many, as they gently remind us!). We are pleased that these critical insights extend the debate on gendered states and highlight the strengths and the shortcomings of a project like this.

We know that this book does not provide all the answers that we are looking for. A book is by no means the last word on gendered states. It is not a finished project for any of us. What we have always hoped, since we developed the idea for this book, is to spark iterative, continuing conversations within feminism, to situate, understand and engage with the modern gendered state, its opportunities, challenges, perils and precarities. It is the kind of conversation we need to have to understand the choices of Shamima Begum, to understand the violence of the Christchurch gunman or the outrage at the gruesome murder of Jamal Khashoggi; to make sense of Brexit and the slow violence of climate change where territories are disappearing with consequential impact on identities that are always also gendered; to decode the masculinity and femininity of current global leadership or to grasp the transnational movement for women’s rights and against gender based violence. We invite you to read on, to share, engage and rage, and most importantly to contribute your own analysis of gendered states of international relations.