The fifth post in our symposium on Cynthia Weber’s Queer International Relations: Sovereignty, Sexuality and the Will to Knowledge is from Dianne Otto. You can read Cynthia’s introductory post and responses to it here. 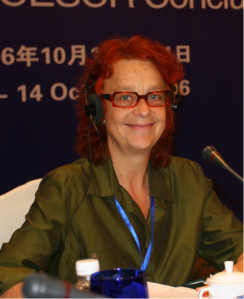 Cynthia Weber’s ‘queer intellectual curiosity’ takes the reader on a journey of discovery that uncovers the manifold ways that tropes of (homo)sexuality have helped to institute, legitimate, authorize and sustain white, western, civilized, capitalist, (neo)liberal ‘statecraft as mancraft’.[1] She sets out to reveal what happens to our understanding of international politics, and in particular its constructions of state sovereignty, when the variable of sexuality is included in mappings of its relations of power. Along the way, she makes a powerful case for the importance of conversations between queer theory and international relations theory by showing how sexuality works as a fundamental organizing principle in international politics (and, I would argue, in international law as well).

Cynthia searches for, and finds, proliferating figurations of the ‘homosexual’ in international affairs and asks what work these figures are doing, especially in relation to sexualizing sovereign subjectivities, which invest the modern state with authority and legitimacy. Drawing on a somewhat dizzying selection of queer/postmodern theoretical and methodological approaches (beautifully explicated in chapter 2), she shows how these figurations also do work beyond the state to sexualize the formal and informal ways that international relations are arranged, including in regional organizations like the European Union and global security campaigns like the ‘war on terror’.

The work that is done by these sexualized figurations is divided into three categories and examined through a number of compelling case studies. The first two of these categories will already be familiar to some. The first engages the figure of the homosexual as ‘perverse’ and dangerously disruptive to modernization and development. This is a long-standing trope of western superiority which helped legitimate colonial expansionism in the name of bringing sexualized order and civility in the form of state-sanctioned hetero-reproductive-married-monogamy to the ‘underdeveloped’, and also marked out those ‘undevelopable’ who will always present a threat to the normal nation state (discussed in chapter 3). These sexually perverse figurations of the non-west continue to help mark distinctions between western and non-western states, and also serve other aspects of contemporary foreign policy, for example in relation to the threats to (western) sovereignty presented by immigration and terrorism, which are discussed as case studies in chapter 4. Perversely figured, the underdeveloped, undevelopable, unwanted (im)migrant and terrorist are all understood to, in various ways, threaten the coherence and stability upon which the modern state relies for its legitimacy.

The second of Cynthia’s more familiar categories is the figuration of the homosexual as ‘normal’. This may come as a surprise, nevertheless, to many readers as it is such a recent development. She uses, as her case study, the Obama Administration’s support for the ‘LGBTI rights holder’, closely reading then Secretary of State Hillary Clinton’s speech declaring ‘gay rights’ to be ‘human rights’ at a UN meeting in Geneva on Human Rights Day in 2011. Subsequently, recognizing the LGBTI as a rights holder has come to freshly signify the civilized, masculinist, liberal state as the ultimate expression of ‘normal’ sovereignty/mancraft, as against the disorder of the perverse non-west. This feat is thus achieved without disturbing the long-standing trope of the dangerously undisciplined and pathological homosexual, who does not qualify as human enough to enjoy rights.

While Cynthia’s discussion of the work done by figurations of the homosexual in international politics as either ‘perverse’ or ‘normal’ is important, it is her third category that really challenges my own queer thinking and breaks new ground in international relations (and international legal) theory. This third figure of the homosexual is cast as simultaneously normal and/or perverse. This approach builds from Eve Kosofsky Sedgwick’s understanding of ‘queer’ as designating ‘a refusal or an inability to signify monolithically in relation to sex, to gender, and to sexuality’ (p. 3), from which it follows that queer subjectivities exceed the binary logics of the either/or (they do not signify solely as EITHER one sex/gender/sexuality OR another, but signify simultaneously as one sex/gender/sexuality AND another). From this starting point, she also draws on Roland Barthes’ plural logic of and/or, to develop what she calls the ‘queer logics of statecraft’. She argues that this queer logic threatens even more disruption to normal sovereign man, and therefore to state sovereignty, than the either/or ordering of the first two categories.

Confused? Excited? Curious? And/or all three?

Thankfully, we are reassured that and/or queer logic can ‘ignite … a frustration with the impossibility of knowing for sure what or who these queer subjectivities are’ (p. 2). It is this frustration, in the absence of binaried certainties, that challenges the normal sovereign state and, in my view, also challenges queer scholars and activists to get used to the discomfort of fluid possibilities. I would love Cynthia to share her experience and thoughts on this question.

To bring her third category into being, Cynthia uses as her case study the queerly plural figure of Tom Neuwirth/Conchita Wurst – the ‘bearded drag queen’ and/or self-identified ‘homosexual’ – who won the Eurovision Song Context in 2014. She argues that Neuwirth/Wurst’s figurations are actually much more complex than these two descriptions allow, in some readings enabling this figure to represent a borderless – or at least integrated – Europe, which, as Cynthia tracks, mattered in different (either/or) ways to Western and Eastern European leaders, as well as global leaders. She argues, ultimately, that Neuwirth/Wurst, when read through the plural logics of statecraft, does not present himself/herself/themselves/itself as a singular or stable figure, including in relation to European integration and unity. Rather, Cynthia suggests that Neuwirth/Wurst ‘makes more sense as a plurally and/or foundation for an always already plurally and/or “Europe”, even as “European” leaders busily disavow and/or logics altogether’ (p. 190). That is, the Eurovision winner, who defies categorization as either normal or perverse, provides an example of the and/or logics that Cynthia argues will so powerfully reveal the fragility of both ‘modern man’ and ‘modern sovereignty’.

I want to now turn to three questions I have for Cynthia. They relate to her neglect of sex/gender, her call for a new appreciation of those who live queerly, and how we might act on her projections for what is at stake.

While I acknowledge this is not necessarily a queer question, it nevertheless seems apt, especially as reference is made to Cynthia Enloe’s method (p. 16) which asks this question as a starting point. I must first admit to not having read Ashley’s work on modern sovereign mancraft. However, I assume that the figure of the ‘sovereign man’ relies heavily on binarised sex/gender whereby he is clearly not ‘woman’. In this frame, I imagine woman is also figured as either normal or perverse, in ways that may intersect with associated figurations of sexuality. Among the perverse figurations have always been the sex worker, the unmarried/single mother and the woman who refuses motherhood. In the contemporary moment, these figures have been joined by the veiled and/or burkinied (Muslim) woman and the terrorist wife, amongst others. Despite admitting early in the book that the figure of the homosexual is not always or necessarily male, nothing comes of this until discussion of Neuwirth/Wurst who is read variously as refusing the binaries of sex, gender, sexuality, race, nationality, and religious and secular authority, which in a variety of ways challenges traditional discourses of European integration. Even then, the operations of sex and gender as particular modes of arranging power are not specifically discussed or explored. This all seems very curious to me as Cynthia consistently includes sex and gender, in addition to sexuality, when referring to her queer method/approach.

In the conclusion, Cynthia argues that queer logics of statecraft demand an ‘appreciation’ of those queer figures who refuse or fail to signify monolithically (according to traditional either/or logics) around sex, gender and sexuality. These figures provide a continual reminder of the endless reworkings of sex, gender and sexuality required to stabilize the figure of ‘modern man’ and, by extension, ‘modern sovereignty’. On one hand, this means defending and working with the impossibility of queer significations in our discipline and political lives. But I take it to also mean that we need to more robustly ‘appreciate’ those who live queer lives, both from within the academy using the tools available to us, and also outside in our everyday lives and communities. I would like Cynthia to talk about what she had in mind here.

In the conclusion to the book, what is at stake if international relations scholars were to take up the plural ‘queer logics of statecraft’ is discussed briefly. Cynthia’s aim was to contest the ‘political delusions of sovereignty’ by bringing to light the ‘personal and political delusions of sexuality’ which help to give modern state sovereignty the appearance of stability and liberal normality (p. 198). In so doing, she has offered us a deeper understanding of the traditional either/or sexualized logics of modern sovereign statecraft. As she says, this should significantly enhance our ability to understand, and resist or challenge, contemporary mobilizations of power in international politics (and law). It should also enable us to ask different questions and create new imaginaries relating to familiar binaries including war and peace, order and disorder, developed and undeveloped by using a pluralized logic. What is ultimately at stake is the claim of the sovereign nation state to its privileged status as an international actor, invested with the political authority to govern and represent diverse communities as singular (in the image of sovereign man) in global, regional and national regimes of power. But my question is how one manages the discomforts and confusions of fluidity, multiplicity and impossibility in this project? What are her tips for survival?

Finally, what I take from Cynthia’s work – what is at stake for me – is the reassurance that imaginaries of sex, gender and sexuality, outside those deployed by states to shore up their sovereign hierarchies and power, continue to be possible. This means too that imaginaries of queer international politics are still possible outside or beyond states, politics that can build solidarity rather than foster division, promote redistributive values rather than private enrichment, challenge the entrenched inequalities of the quotidian rather than normalizing and exploiting them, advance positive peace rather than militarism, and ensure environmental sustainability rather than degradation – aspirations that I now need Cynthia’s help to rethink in plural logics.