The third and final piece in a short series on naming and disciplinary representation. Marysia Zalewski is Professor in the School of Social Science at the University of Aberdeen, where she was previously Head of School and Director of Research. Marysia is the author of many text, most recently Feminist International Relations: Exquisite Corpse (Routledge, 2013), and before that Feminism After Postmodernism: Theorising Through Practice (Routledge, 2000) and (edited with Jane Parpart) The “Man” Question in International Relations (Westview, 1998) and Re-thinking the Man Question: Sex, Gender and Violence in International Relations (Zed Press, 2008).

I don’t usually work with definitions of feminism as they so often wrap feminism up too tightly. But this one offers a lot of openings: ‘Feminist theory is one of the ways in which feminism tries to challenge misogyny’s history and refuse its inheritance’ (Morris 1987: 176). I know misogyny isn’t a very comfortable word and not used much contemporarily, but there is something about the idea of challenging work (thinking, ideas, beliefs) which nurture misogyny and its close relations (e.g. sexism), and perhaps more, refusing its inheritance, the trails of which we so consistently witness personally, intellectually, emotionally and politically.

Refusing damaging historical, philosophical and disciplinary inheritances is something that was at the heart of the disquiet at an event planned for the EISA conference in Sicily in September 2015. What was planned was the naming of some of the panel rooms (attaching name plates to doors) after scholars deemed fundamentally important to the founding of the discipline: 18 names in total. All white, all men, all dead. The absence of women in such a list proffers symbolic injury of course; as delegates trooped in and out of panel rooms, constantly being reminded, if subtly, like a ‘casual reminder’ (el Malik, 2015) that the ‘world of international studies’ still belongs to (white) men, even the dead ones. And it’s not as if the spectre of ‘all white/male line-ups’ hadn’t been of serious concern in the year previous to the EISA conference in two of the other professional organisations associated with academic theorising of the international. This was detailed in a letter prepared to send to the EISA organising committee by a group of students and scholars to protest the planned ‘naming event’:

It seems it is still far too easy to readily remember and showcase the already and always remembered, revered and honoured, as Saara Särmä’s ‘All-Male Panels’ tumblr strikingly and creatively illustrates.

And the issue is not only that there are women who have visibly mattered in the pursuance of theorizing the ‘international’, remembering that there are ‘others’ who labour in the arena of the international who are not male or white, perhaps helps us to know better (and maybe for longer) that there are other ‘worlds of politics’ than the one(s) disciplinary boundaries capture and insist are natural. Worlds where ‘different’ people matter and not just those who insist, by any means, on retaining the centre and locus of importance; the omnipresent white men.

The letter was sent to EISA’s organising committee before the conference took place asking for an explanation and for some form of reparation. Additionally, action to draw attention to the ‘all male line up’ at the conference was planned.[1] I did wonder what response we might get, I imagined that the organisers would be puzzled by the levels of frustration and anger, possibly irritated and a touch defensive too. These kinds of reactions are not unusual when sexism and even misogyny are explicitly pointed out; think of the fiasco around the new UK passport design announced in late 2015. The redesign focuses on UK figures and landmarks from the past 500 years and features 7 men and 2 women. In his defence (or really ‘assertion of innocence’) of the design, Mark Thomson, director general of the Passport Office, said, ‘it wasn’t something where we said ‘let’s set out to only have two women’ (that’s ok then …). When asked about the omission of female icons such as Jane Austen and the Bronte sisters, he said: ‘Whenever we do these things there is always someone who wants their favourite rock band or icon in the book’. The issue was also discussed on the BBC’s ‘Any Questions’ radio programme; one of the male panellists expressed his exasperation at the complaints retorting that history could not ‘simply be re-written’.

The thing is – it is really not that hard, not difficult at all to demonstrate what is wrong with these views. Of course it matters in terms of symbolism, equality and justice – at a minimum – that women should be properly represented and included. Of course there ARE women who could be named and included, even on the traditional (and thus male defined) standards of conventional institutions like academic professional associations and governmental departments. And of course naming has enormous power, not least those names that propel into the future unwanted legacies of the past, nurturing them through the apparent innocence of a name, or indeed a ‘title’. This is my ‘business card’: 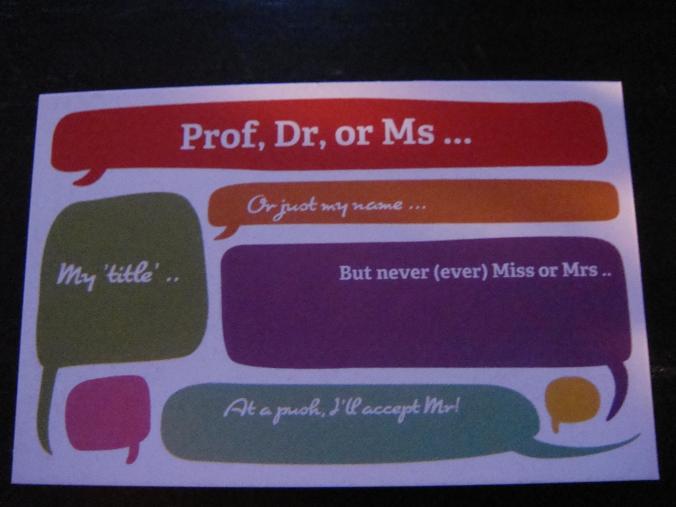 Well ok, it’s not really my business card; I was just getting increasingly frustrated by the constant question asked of me (and countless other women I am sure) in stores, on the phone or online (where the first available title in the drop down menu is most often ‘Mr’): ‘is that Miss or Mrs?’ Really? In 2015?

Though decisions are regularly made to change names, as Regina Reni demonstrates in her blog piece ‘Should we rename institutions that honor dead racists?’ – referring to calls to rename the Woodrow Wilson School of Public and International Affairs, a Princeton institution in the United States. Given Wilson’s racist credentials Rini asks whether it is simply reasonable to wish not to study in a place that honors a man who would have you keep to your own, segregated end of the lecture hall. For students of colour, living in a society that preaches equality and practises something else suggests we should think very seriously about’ whose histories are most in the weighing’. Will we choose to continue and nurture the embarrassment of very sticky chains of racist, sexist and misogynist reference? Or will we disrupt them?

The Weight of a Man’s Shoe

Mary Ellmann’s riotous book Thinking about Women (1968) begins with an interview. Ellmann is being interviewed by a man who asks why she is writing about women. Ellmann’s reply? ‘I didn’t want to overreach. Right from the start I thought, ME, you must limit yourself to half the human race. Man: Then you were not prompted by feminism? ME: Please. Man: Oh. Feminism is out isn’t it? ME: Well, yes, in the way principles all go out before they’re practiced. Man: Then, you do not have a female program of your own? ME: You phrase things peculiarly. Man: I scarcely know what word will not offend you. I will try again. You don’t have a program for women? ME: No. No program. Man: Ah! But perhaps you will define the attitude of the woman toward the gun, the ship and the helicopter? ME: Impossible. Man: It’s been done. A man has done it for men. ME: Indeed.[2]

This conversation sounds very contemporarily familiar (even if the wording might change somewhat today). And further, in a wonderful section on ‘differences in tone’, Ellmann discusses intellectual matters and specifically ‘the symposium’ – a conference of sorts. She suggests there are ‘distinctions’ between men and women in the realm of ‘intellectual tone’ (Ellmann is working with ‘social constructionism’ if not using term; she is also very much writing ‘comedy'[3]). The first distinction is that the male body lends credence to assertions, while the female takes it away; perhaps a statement that may not be overly palatable for a 21st century audience. But here’s the key phrase: ‘the subliminal assumption is that from weight must come weight: men’s shoes alone seem a promise of truth’ [a glorious phrase!] The effect is heightened by the vogue of the symposium, at least it is [persistently it seems] arithmetically intensified.

An emblem of confidence: four men and a moderator on stage, sitting behind a long table, each with his own glass and pitcher of water. (Men also drink more water on stage than women do, and the effect of these pauses, unless the water spills, is again sober and deliberate). Even to an audience of faint impressionability [like we might think at an ISA, EISA or BISA conference] it seems inconceivable that wisdom should not issue from such an assemblage.[4]

Ellmann’s 1960’s observations reverberate well into the 21st century and notably around the debacle of the ‘EISA naming’ event. Do we have the authority or the entitlement to refuse these kinds of inheritances? Yes. But resistance to curtailing sexism, misogyny and racism remains very strong and materializes in many different forms. Few would simply say no to the call to curtail these violences. But many choose not to notice and not to think. And to choose to be unthinking, as well as to be ‘offended’. Do we really want one persistent answer to Regina Rini’s question – ‘Whose histories are most in the weighing’?

[1] Facebook playing a huge part in the pre-conference organisation of this.