The third and final piece in a short series on naming and disciplinary representation. Marysia Zalewski is Professor in the School of Social Science at the University of Aberdeen, where she was previously Head of School and Director of Research. Marysia is the author of many text, most recently Feminist International Relations: Exquisite Corpse (Routledge, 2013), and before that Feminism After Postmodernism: Theorising Through Practice (Routledge, 2000) and (edited with Jane Parpart) The “Man” Question in International Relations (Westview, 1998) and Re-thinking the Man Question: Sex, Gender and Violence in International Relations (Zed Press, 2008).

I don’t usually work with definitions of feminism as they so often wrap feminism up too tightly. But this one offers a lot of openings: ‘Feminist theory is one of the ways in which feminism tries to challenge misogyny’s history and refuse its inheritance’ (Morris 1987: 176). I know misogyny isn’t a very comfortable word and not used much contemporarily, but there is something about the idea of challenging work (thinking, ideas, beliefs) which nurture misogyny and its close relations (e.g. sexism), and perhaps more, refusing its inheritance, the trails of which we so consistently witness personally, intellectually, emotionally and politically.

Refusing damaging historical, philosophical and disciplinary inheritances is something that was at the heart of the disquiet at an event planned for the EISA conference in Sicily in September 2015. What was planned was the naming of some of the panel rooms (attaching name plates to doors) after scholars deemed fundamentally important to the founding of the discipline: 18 names in total. All white, all men, all dead. The absence of women in such a list proffers symbolic injury of course; as delegates trooped in and out of panel rooms, constantly being reminded, if subtly, like a ‘casual reminder’ (el Malik, 2015) that the ‘world of international studies’ still belongs to (white) men, even the dead ones. And it’s not as if the spectre of ‘all white/male line-ups’ hadn’t been of serious concern in the year previous to the EISA conference in two of the other professional organisations associated with academic theorising of the international. This was detailed in a letter prepared to send to the EISA organising committee by a group of students and scholars to protest the planned ‘naming event’:

It seems it is still far too easy to readily remember and showcase the already and always remembered, revered and honoured, as Saara Särmä’s ‘All-Male Panels’ tumblr strikingly and creatively illustrates.

END_OF_DOCUMENT_TOKEN_TO_BE_REPLACED

The second post in a short series on naming and representation in IR spaces. Here Saara Särmä and Cai Wilkinson respond to Knud Erik Jørgensen. Saara is a feminist, scholar and artist. She is the co-founder of the Feminist think tank Hattu and the creator of “Congrats, you have an all male panel!“, “Congrats, you have an all white panel!“, and “Congrats, you did not cite any feminists!“. Cai is Senior Lecturer in International Relations at Deakin University, and has written widely on securitization, international politics in Central Asia and the use of interpretive ethnographic methods in Critical Security Studies. Both Saara and Cai have contributed to The Disorder before.

Knud Erik Jørgensen’s post responding to criticism of the naming of rooms at the EISA conference in September and explaining his rationale does not exactly invite engagement. Indeed, it seems designed to dismiss and silence, the implicit message being that we should know our place in IR and defer to our elders and (by mainstream standards, at least) betters. Feminists, it turns out, might occasionally be seen, but should still not be heard. Nevertheless, we felt that a response is in order.

Our criticism of the all male room decision is, indeed, about issues that are of much more significance than 18 of 32 meeting rooms in Sicily. We share a concern with Jørgensen about the future of IR; we all want to make IR a better place. Why on Earth would we have stayed in IR in the first place, if we didn’t? That’s why we expect more and urge all of us to do better. No-one is perfect and fuck-ups are inevitable. However, this should not prevent us from speaking out when things go wrong. It is axiomatic that we should seek to learn from our mistakes, but this can only happen if we are able to take in criticism and admit responsibility in ways that are productive and open for further engagement, rather than reacting defensively. This is rarely easy.

As the former president of EISA who decided to name the 18 rooms, Jørgensen writes from a position of power. Yet rather than acknowledging his role, he misrepresents what happened by leaving out crucial details about the issue. He purports to be responding to only Särmä and Wilkinson, omitting the fact that there was a letter from BISA Gendering International Relations Working Group, signed by 77 people sent to the EISA board, and that an official reply from the new Executive Committee of EISA acknowledged that the decision to name the rooms was a mistake and lay responsibility in Jørgensen’s hands.

END_OF_DOCUMENT_TOKEN_TO_BE_REPLACED

A guest post from Knud Erik Jørgensen. Knud Erik is Professor of Political Science at Aarhus University and the author of many works on European foreign policy, the European Union and European IR theory. He is also former Chair of the ECPR Standing Group on International Relations (2010-2013) and current President of the Governing Council of the European International Studies Association (EISA). This is the first in a short series on naming, representation and power in the discipline of IR.

In a Duck of Minerva blogpost about the 9th Pan-European Conference on International Relations, Cai Wilkinson got most things wrong and three things right. Regarding the latter, the conference and section chairs did indeed manage to produce the probably most diverse programme in the world and they have rightly been highly praised for this accomplishment. I can therefore imagine it took Saara Särmä, the Tumblr artist/activist and admirer of David Hasselhoff a really long search to find something to admonish but then, finally, in a moment of triumph, she spotted 18 of the 32 meeting rooms. Second, greater diversity in organisational structures does not necessarily result in a different politics. This is probably correct but does not demonstrate much insight into policy-making processes within associations or address the issue why one would expect that greater diversity in governance structures would produce a politics that is favoured by Wilkinson. Third, diversity does not just exist along a single axis and the naming of rooms in Sicily illustrates neatly how multiple axes of diversity produce numerous encounters and compete for attention and space. 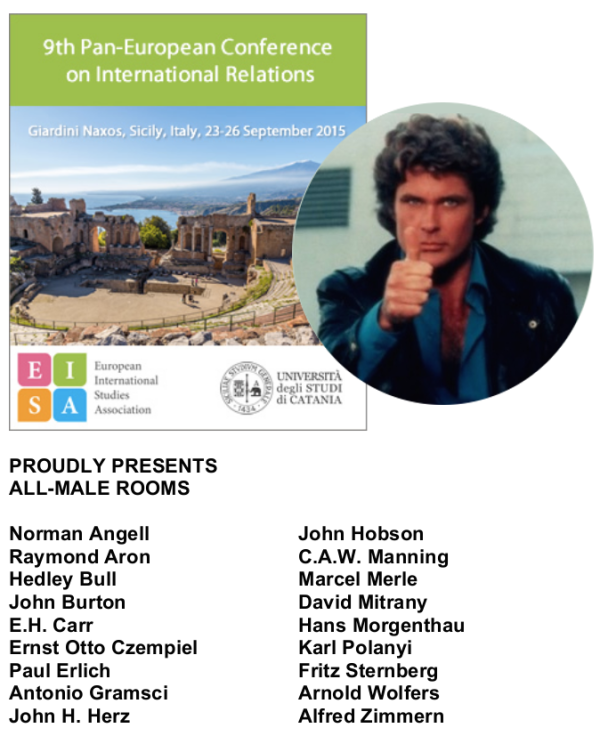 The Congrats, You Have An All-Male Panel! Tumblr.

Wilkinson got most things wrong and therefore claims injury and insult. The rooms in question were not renamed but named. If Wilkinson had asked the organizing committee or for that matter attended the conference she could have learned that 18 converted guest rooms had numbers but got names. Room 5115 became Zimmern and room 5114 became Wolfers, etc. During the conference some panel rooms were unofficially renamed.