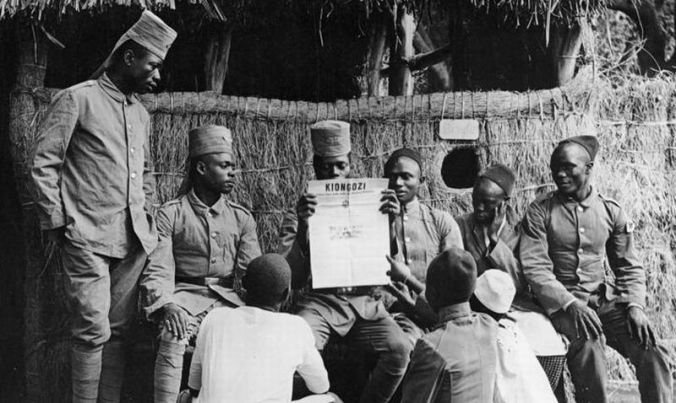 Askaris fighting for Germany listen to the news.

The Disorder of Things hosts a short series of posts connected to the event ‘The Global Colonial 1914-18‘, held at SOAS on 18th September 2014, and co-organised by the Colonial / Postcolonial / De-colonial Working Group of the British International Studies Association.

Our first post is by Lucian M. Ashworth, who discusses the breakdown of the colonial armed peace, as viewed by contemporary observers.

Our second post is by Dušan I. Bjelić, who offers a racial genealogy of the Great War.

Our third post is by Meera Sabaratnam, who suggests a contrapuntal reading of the war based in colonised Mozambique.

Our fourth and final post contains a transcript and video of the public roundtable which took place at the end of the day, featuring Hakim Adi, Catriona Pennell, Parmjit Singh, Martin Spafford and Charles Tripp, in which the colonial dimensions of the war are discussed, as well as their implications for teaching and commemorating the period today.

This post serves as a permanent link for the series.