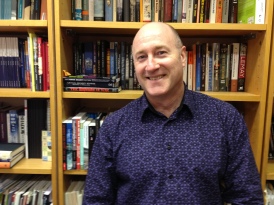 The third post in our mini-forum on critical methodologies and narrative in IR, now from Anthony Burke. Anthony is Associate Professor of International Politics at the University of New South Wales, Canberra, Australia. His works include Beyond Security, Ethics and Violence: War Against the Other (Routledge 2007), a recent essay in Angelaki, ‘Humanity After Biopolitics’ (December 2011), and the narrative essay ‘Life in the Hall of Smashed Mirrrors’, in Borderlands and Meanjin.

I have long been concerned by the way that language has two potentials with relevance to the study and practice of politics. On one hand, when combined with systems of logic and categorisation, language can construct, imagine, and fix powerful images of the real, and enable their deployment into material formations of industry, political organisation and human action. Language does not translate directly into power or constitute successful actions; it may indeed find contest and frustration. But we should hold this power in awe and watch it carefully, much as we may watch a dangerous animal that comes into our presence — after all, what more dangerous animal is there than the human, given its collective social powers of organisation and rationalisation, powers deployed through and within language?

On the other hand, particular forms and strategies of language have the power to undo and challenge this ontologizing potential: to see meaning defer and slip away, to see truths appear and shimmer into mist, to see its own strategies revealed even as it pursues them, to find itself haunted by thoughts and signs it did not intend. As Michel Foucault describes it in The Thought From Outside, this is language arriving ‘at its own edge…toward an outer bound where it must continually contest itself’. When this takes on the form of fiction, he argues, language is “no longer a power that tirelessly produces images and makes them shine, but rather a power that undoes them, that lessens their overload, that infuses them with an inner transparency that illuminates them little by little until they burst and scatter in the lightness of the unimaginable”.

This points to two strategies: one taking the form of social science, the other, the form of fiction.

I have pursed this project of deconstruction and unmasking in the form of social science, in way that both affirms and challenges its rules: to question ontologies of war and national security, the rationalist pretentions of nuclear strategy, the narrative confidence of American exceptionalism or the ‘good state’. To explore the dangers of all these things, of narrations and categories taken as truth, of choice masquerading as truth.

Yet I was also driven to literature as a possibility…of what, exactly? A mode of analysis that might enable me to see how narrative and metaphor structured particular forms of political power, and in turn light a route out of the fixity and inevitability of such metaphors and their politics. In this light, poetry might chart routes beyond the fixed ontologies and parental claims of the national security state, and its psychic power be disturbed; a conflict in Palestine that seemed to hinge on narrative incommensurability, could be rethought; or the narrative certainties of national destiny be wrecked on the shores of its own constitutive violences, otherings, and deceptions.

Yet that too was recognisable as social science, where critical reflection joined with normative, political and ontological polemics of my own. This too seems a kind of deception, where the strategies of narrative truth are unmasked, only to be replaced with new masks, with new implications.

So this is my question: Does social science as fiction allow us to escape this dilemma, or not? Does it undo images or make them shine, so brightly that we cannot see what lies behind, within or beyond them?

Social science as fiction seems to me to take two forms.

One is the novel and the short story, which pursues socio-political themes within a narrative framework of more of less naturalistic prose and humanist character study that deliberately effaces its own artifice and draws the reader powerfully into its world, emotionally, affectively. I think here of works such as Graham Greene’s The Quiet American, Don Delillo’s Libra, Joan Didion’s Democracy, Max Frisch’s Homo Faber, the speculative science fiction of Margaret Atwood or Peter Carey, or Elizabeth Dauphinee’s marvellous new novel about Bosnia, The Politics of Exile.

One might fault them for their concealment of artifice, except that all these works do something else. They undo and challenge subjectivity, the self-presence and control of the subject, its mastery of its own nature and world, its mastery over events or history, whether this be in running the Cold War, spycraft and counterinsurgency, engineering third world development, or joining ethnos and nation with the blood of confused and troubled young men. Instead, such subjects find themselves trapped in absurdity and tragedy, confronting truths, and futures, which they had not imagined or prepared for. This is the power of the modernist novel: even if the art was not forced to confront its own artifice, its troubled souls were. That is the birth of a kind of ethics.

The other form of fiction as social science I saw developing as I studied cultural theory and writing at the University of Technology in Sydney; our teachers, like Stephen Muecke, called its ficto-criticism, a form that combined naturalistic and self-reflexive modes of fiction with more transparently theoretical work. This kind of work can be seen in Muecke’s No Road: Bitumen All the Way, in the book, Dispositions, by the New School cultural theorist McKenzie Wark, and my own ‘Life in the Hall of Smashed Mirrors’.

Fictocriticism seems to open up some intriguing potentials: it can use the suggestive and allusive modes of fiction and narrative to sneak up on theoretical insights, rather than use the logical and argumentative modes of social science or philosophy; it can use them to open space for insights that one does not yet have, that might surprise or shock or disturb, that bubble up from the subconscious or from sudden juxtapositions or out of the narrative blur of the world and its texts. It can use narrative to blend and question both subject and world; to introduce other voices and points of view; to search for places where the imaginative power of discourse confronts the materiality of the body or matter or events.

But this critical potential seems equally matched by a more conservative one. Does the resort to narrative allow one to conceal theoretical reasoning behind narrative flow and affect, the seamlessness where words and significations bind together beautifully, into the slippage between text and real? Does it allow us to conceal our polemic and our claims? Is there a secret rhetorical power to persuade being mobilised here? Or does it simply expose truth to light, make it shine, fix it where it needs to be found? Is there virtue in such concealment? Is that always a danger, or could it also be a kind of ethics?

The Critical Methodologies symposium I was honoured to attend last Autumn at York University made me ponder these dilemmas more deeply, and made me realise that they are in many ways insoluble, and should remain so. Listening to its speakers talk about indigenous struggles and histories in Hawaii, the seamlines of conflict and identity in Israel/Palestine, the s(p)eeking of Inuit experiences of violence and oppression and silence, it became clear that questions about the ethical relationship between narrative, identity, and power were never eradicable; that speaking for oneself was often empowering—both in a way that was critical and reconstructive of the self—but that speaking for or with others was doubly fraught. That seizing the powers of narrative could break up ossified knowledges and strategies in IR, but could open onto new dangers. Which narrative was right, which true, which ethical? What honours rather than exploits? What line of approach to a reticent and private other, however based in sympathy, would be justifiable? Could a different social scientific demand and economy (ethnographic or sociological, for example) create injustice in its institutionalised demand for stories, made into commodified and verified structures of information? What to do in the face of silence, what to speak then?

Words can be shelters, or bullets, and our stories multiply them into glowing chains, replete with beauty and terror. Where, we might ask, will such stories end…and how? For whom?

One thought on “Narrative, Politics and Fictocriticism: Hopes and Dangers”