Strange country that gives the man it nourishes both his splendour and his misery!

Many presumed his macabre tone would bring back some much-needed edge to the increasingly commercial sensibilities of the Cannes Film Festival this year, but with Ridley Scott’s revamped Robin Hood picked to open the festival hopes were quickly dampened. Tim Burton, the tousle-haired American director, may have a singular visual imagination and be a favourite amongst cinephiles, but as jury president he failed to appreciate the struggle to build a habitable multicultural Europe that was taking place both on and off screen.

A Screaming Man, by French-Chadian Mahamat-Saleh Haroun, is set during the current civil war in Chad, and tells the story of a former central African swimming champion who sends his son to war so as to regain his position as a security guard at the swimming pool of an expensive European hotel. Taking its title from Aimé Césaire’s collection of poems Return to My Native Land, Haroun’s fragile look into post-colonial conflict captures the bewitching impact of a symbol of Europe’s lasting legacy in Africa. Rachid Bouchareb, the celebrated French-Algerian filmmaker, presented Outside The Law; the latest in a new wave of French-North African films aimed at simultaneously curing France’s colonial amnesia and rupturing the borders of contemporary French culture. The film takes place between 1945 and 1961, and focuses on the contrasting fate of three Algerian brothers who have fled for France in the aftermath of the Sétif massacre. It poignantly ends with the credits anticipating the October 1961 Paris Massacre in which over 200 pro-FLN demonstrators were killed by being beaten unconscious and thrown into the River Seine or tortured in the courtyards of Paris police headquarters. Bouchareb has strategically chosen to set his narrative between two of France’s most notorious – but still officially contested – state-sanctioned crimes. Following on from his previous film, Days of Glory, which deals with the discriminatory treatment of indigènes recruited into the Free French Forces formed to liberate France of Nazi occupation in World War II, Outside The Law continues the prescient struggle over representations of France’s colonial history.

Although Rachid Bouchareb was considered by most to be the favourite to scoop the Moroccan leather encased prize, the man who recently chose to indulge Alice’s imperial ambitions in 3D, decided to award the Palme d’Or to Of Gods And Men. Xavier Beauvois’ drama is set in the Cistercian monastery in Algeria, whose resident monks are confronted by your archetypal Islamic fundamentalists. Saturated with Christian faith, the film squares the noble patience, love and belief of the monks against the intolerance of Islamic fundamentalists and their apparently regressive, intolerant and bloodthirsty worldview. Despite most of the notable tastemakers – from Philip French, Peter Bradshaw, and even the usually astute Mark Kermode – falling for the film’s quaint charms, Of Gods And Men remains a film that enjoys flirting with both audiences’ assumed prejudices and the intolerably stubborn idea of a clash of civilisations. Dare I say Beauvois’ reverential and holier-than-thou tone could have done with some of Roberto Benigni’s light-hearted but equally annoying flamboyancy.

With the likes of Homi Bhabha and Gayatri Spivak now comfortably donning the robes of academic superstardom, cultural studies no longer holds its former position as rebellious younger child of academia. Having breeched the stuffy walls of Ivy League and redbrick institutions, it has becoming increasingly safe in its approaches to contemporary culture, and thus been unable to find an adequate balance between aesthetic concerns and pressing socio-political contexts. Of Gods And Men is undoubtedly beautifully crafted, and the performances of the ensemble cast – most notably Lambert Wilson and Michael Lonsdale – are memorable, but a number of questions over representation remain overlooked. Once Xavier Beauvois’ film is placed in counterpoint to both Haroun’s and Bouchareb’s representations of France’s past-future, a different reading emerges. Not only does it bring to light a nation’s modern anxieties over national identity and its increasingly multicultural make-up, but it also stresses the present struggles of representations over France’s past, with significant implications for any post-colonial conviviality.

Although the Algerian government has repeatedly been accused of exploiting extremist violence and even staging gruesome attacks and blaming them on extremists, it has been widely assumed that Xavier Beauvois’ film is based on true events – the kidnap and beheading of seven French Trappist monks from the monastery of Tibhirine in 1996. Despite the financing and production of the film coinciding with increased doubt about the assumed role of the Armed Islamic Group (GIA) and the revelation of the Algerian army’s possible involvement in the incident, the film’s narrative leaves no ambiguities as to who killed the monks. In 2009, the retired French general Francois Buchwalter, who was the military attaché in Algeria at the time, testified that the monks had been killed accidentally from an Algerian military helicopter during an attack on a guerrilla position and then beheaded after their death to make it appear as though the GIA had executed them. Although President Nicolas Sarkozy pledged to release vital documents, key papers deemed to be vital to state security have remained classified. However, with increasing public pressure and a request by investigative magistrate Marc Trévidic earlier this month, a French judge has agreed to reopen the investigation into the murders.

Lived history is the primary battleground for both Bouchareb’s and Beauvois’ films. On the day of Outside The Law’s opening at Cannes, police in riot gear lined up outside the Palais des Festivals as hundreds of demonstrators marched past the Cannes town hall. ‘What we want to make clear by demonstrating is that it is intolerable that public money from France can be used to sully the French army and France’s actions in Algeria,’ said Jacques Peyrat, a veteran and former French senator.

Afterwards the film was also met with growing criticism from a number of French historians. Lionnel Luca, a member of the National Assembly for the UMP, appealed for a review by the Defence Historical Service as soon as he heard about the project. Luca also criticised the public funding given to a film he deemed ‘revisionist’ and ‘anti-French’.

In Silencing the Past, Michel-Rolph Trouillot explores how the retelling of historical ‘truth’ can be manipulated to serve particular groups and interests. In his seminal work on the Haitian revolution, Trouillot rejects the proposition that history is no more than self-justifying propaganda written by victors. Rather, he suggests that past events are always in contention and that it is our responsibility to strive to listen to and recount its multiple voices. Pastness is thus a position that is malleable to the trajectories of our contemporary culture. This struggle to build our past as we build our future can be seen in the outrage that ensued Bouchareb’s Days of Glory, which moved Jacques Chirac, the then French president, to even-up the pensions of African veterans to the levels of their French cohorts. 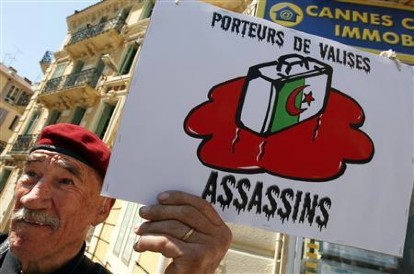 For many years Michael Haneke has been credited for taking Europe’s post-colonial melancholia to task. His 2005 film Hidden, was particularly striking in this respect. The film revolves around the mystery of a series of anonymous videotapes that appear on the doorstep of a typical middle class Parisian home, which neatly turns into a metaphor for Europe’s paranoia over the violence it has itself created and then repressed from consciousness. However, as Paul Gilroy notes, ‘the film seemed to offer only a shallow, pseudopolitical, or perhaps more accurately antipolitical, engagement with profound contemporary problems that deserve – or demand – better treatment than an elaborate exercise in mystification can provide.’ However, a new generation of filmmakers and screenwriters – most notably French-Algerian screenwriter Abdel Raout Dafri (Mesrine and A Prophet) – feel that there are pressing issues of morality and accountability in raising these histories and have taken to the task with both swagger and incisive vision. In a final twist, both Of Gods And Men and Outside the Law have been selected to represent France and Algeria respectively in the Best Foreign Language Film category at the Oscars in February.