Strange country that gives the man it nourishes both his splendour and his misery!

Many presumed his macabre tone would bring back some much-needed edge to the increasingly commercial sensibilities of the Cannes Film Festival this year, but with Ridley Scott’s revamped Robin Hood picked to open the festival hopes were quickly dampened. Tim Burton, the tousle-haired American director, may have a singular visual imagination and be a favourite amongst cinephiles, but as jury president he failed to appreciate the struggle to build a habitable multicultural Europe that was taking place both on and off screen.

A Screaming Man, by French-Chadian Mahamat-Saleh Haroun, is set during the current civil war in Chad, and tells the story of a former central African swimming champion who sends his son to war so as to regain his position as a security guard at the swimming pool of an expensive European hotel. Taking its title from Aimé Césaire’s collection of poems Return to My Native Land, Haroun’s fragile look into post-colonial conflict captures the bewitching impact of a symbol of Europe’s lasting legacy in Africa. Rachid Bouchareb, the celebrated French-Algerian filmmaker, presented Outside The Law; the latest in a new wave of French-North African films aimed at simultaneously curing France’s colonial amnesia and rupturing the borders of contemporary French culture. The film takes place between 1945 and 1961, and focuses on the contrasting fate of three Algerian brothers who have fled for France in the aftermath of the Sétif massacre. It poignantly ends with the credits anticipating the October 1961 Paris Massacre in which over 200 pro-FLN demonstrators were killed by being beaten unconscious and thrown into the River Seine or tortured in the courtyards of Paris police headquarters. Bouchareb has strategically chosen to set his narrative between two of France’s most notorious – but still officially contested – state-sanctioned crimes. Following on from his previous film, Days of Glory, which deals with the discriminatory treatment of indigènes recruited into the Free French Forces formed to liberate France of Nazi occupation in World War II, Outside The Law continues the prescient struggle over representations of France’s colonial history. 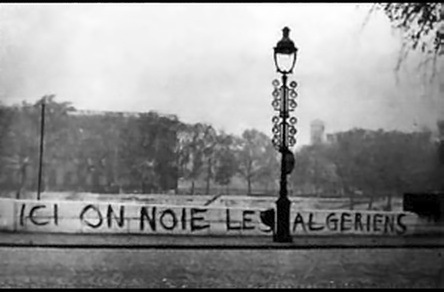 Although Rachid Bouchareb was considered by most to be the favourite to scoop the Moroccan leather encased prize, the man who recently chose to indulge Alice’s imperial ambitions in 3D, decided to award the Palme d’Or to Of Gods And Men. Xavier Beauvois’ drama is set in the Cistercian monastery in Algeria, whose resident monks are confronted by your archetypal Islamic fundamentalists. Saturated with Christian faith, the film squares the noble patience, love and belief of the monks against the intolerance of Islamic fundamentalists and their apparently regressive, intolerant and bloodthirsty worldview. Despite most of the notable tastemakers – from Philip French, Peter Bradshaw, and even the usually astute Mark Kermode – falling for the film’s quaint charms, Of Gods And Men remains a film that enjoys flirting with both audiences’ assumed prejudices and the intolerably stubborn idea of a clash of civilisations. Dare I say Beauvois’ reverential and holier-than-thou tone could have done with some of Roberto Benigni’s light-hearted but equally annoying flamboyancy.

With the likes of Homi Bhabha and Gayatri Spivak now comfortably donning the robes of academic superstardom, cultural studies no longer holds its former position as rebellious younger child of academia. Having breeched the stuffy walls of Ivy League and redbrick institutions, it has becoming increasingly safe in its approaches to contemporary culture, and thus been unable to find an adequate balance between aesthetic concerns and pressing socio-political contexts. END_OF_DOCUMENT_TOKEN_TO_BE_REPLACED