The publication of Blair’s recollections and rationalisations has been a gift to many of us. Not content with the material for satire he provided during office, he has now furnished us with further damning evidence in his own hand. A weighty (non est) mea culpa. Pat psychologising, quasi-religious conviction, the hamfisted use of historical analogy and that overwrought prose (now infamous: “I needed that love Cherie gave me, selfishly. I devoured it to give me strength. I was an animal following my instinct, knowing I would need every ounce of emotional power to cope with what lay ahead“). All of this has enabled some incisive commentary, and some barely contained rage: Tony as Captain Stanhope; Tony as the ‘preacher on a tank’ (Dick Cheney’s apposite barb); Tony as delusional Christ-Pope in waiting.

Three thoughts. First, there is the question of how we can now read Blair, and Iraq as the exemplar of his style of thought. What were the mechanisms that allowed the clear advice of experts of all stripes, and the opposition of most of the population, to be translated into an unbending commitment to the projection of American power? A familiar answer is that the New Labour project was driven by the energies of Blair’s religious (or religious-like) faith, his commitment and earnestness and belief. But the scene set by A Journey and its deconstructions is far more prosaic. On the one hand, there is plenty of garden-variety ‘misperception’. Actors chose the analogies that fit their pre-established understandings, over-emphasised the pressures for action in their calculations, and failed in their responsibility to examine situations from more than one angle. These are the kind of slippages that pop up enough for some systems- and cognitively-minded scholars to trace their role in wars across the ages.

On the other hand, there is Blair’s extraordinary decisionism. Something must be done, and someone must do it. But this is in some ways the reverse of a faith-based politics. It was not belief that guided Blair, and certainly not carefully delineated actions set out by dogma or doctrine. It was the absence of such a schema which mattered, at least on his own account. “The pieces are in flux”. Hence the insistence on leadership, on grasping the truth and necessity of the moment. What continues to intrigue is this movement between an over-abundance of values and the hardened core of Machiavellianism. The necessity was never one dictated by the ends of justice, but only that of power and its demands.

Yes, ideology was at play. But structurally so. Not in the bible readings and personal psycho-dramas of two little rich boys from New Haven and Edinburgh, but in a much less appreciated, and much more insidious sense. A subjectivity with a sociology. There is something typically Žižekian about this apparent paradox. As with others nominally committed to grand projects, the issue is not one of hypocrisy, so much as of the means by which raw power and purity of purpose can be experienced as synonymous:

the figure of the ‘big Other’ as a background against which [to] exert… ruthlessness and drive for power. They had displaced their belief onto this Other, which, as it were, believed on their behalf. 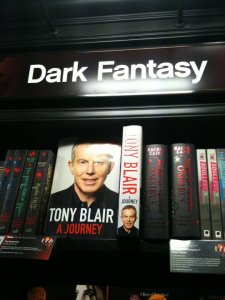 Second, there is the extraordinary feeling of revenge by proxy in the reviews. We may not be able to undo, or even mitigate, the manifold political disasters for which we hold him responsible, but we can certainly expose his corny sentiments and literary shallowness. There is an enjoyment here too, if a peculiarly bitter one, as the political contests of five or ten years ago are re-fought in inky flourishes. Blair’s cultural references are “lowbrow and dated”, the smarmy over-familiarness of a rictus grin transposed in the overuse of exclamation marks. This is literary criticism as the answer to the smug entitlement of David Miliband’s question: “haven’t you punished us enough?”. No, we haven’t. The pen may not be mightier than the sword, but you can still do some serious stabbing damage with it.

This is a kind of therapy, but consolation can obscure as well as heal. Which leads to the third, and related, point. Pleasing as it is to trash the Vicar of St. Albion, the effect is to encourage and reproduce a highly individualised account of world politics. Certainly, we may hate Blair even if he doesn’t bear ultimate responsibility for ‘his’ own militarised adventures, but the subtext is that he does. What we require instead is a provincialising of Blair. Or even something stronger. What does our account of Iraq look like if we exclude him as a factor all together? To do so opens up extensive and fraught arguments, not only about the relative blame to be attributed to pivotal figures in the cabinet or in the machinery of state power generally, but also towards a sociology of social movements and their failure, the deference of media commentators to faux official intelligence (by which I mean the representation of intelligence by Downing Street, not the intelligence itself), a sober account of what is possible in the shadow of an economic, military and political hegemon, and a re-thinking à la Barkawi of the impact of small countries, and small wars, on big ones.

Viewed thus, complaints that we’re just not being fair with all this ‘Bliar’ stuff take on a new plausibility. Perhaps we could subject him to the power and pride of international law, misplaced as our belief in it as a system of such justice may be. But how are we to guard against reconfirming our impotence by sacrificing the symbolic stand-in instead of the enemy itself? Certainly, we have proved capable of saturating Blair with our meaning, and turning him into a linchpin figure in the history of the 21st century, responsible not only for lubricating the neo-con death drive, but also for permanently channelling Thatcher into the veins of the body politic, stripping out the safety valves of Whitehall oversight, and reinvigorating the interventionist wet-dream in Kosovo and Sierra Leone. By force of will alone. But who’s slipped out the back door while we were at it? It’s almost enough to turn Blair into a sympathetic figure. Almost.

I always reckoned that even the ones who didn’t like me…still admired the fact that I counted, was a big player, was a world and not just a national leader.

After all, if this is the kind of comfort Tony is getting from his ‘legacy’, rendering him irrelevant may be the best revenge of all.