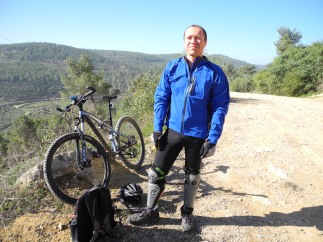 Post seven in our ongoing mini-forum on methodology and narrative in (critical) IR. This time it’s the turn of Oded Löwenheim, who is Senior Lecturer at the Department of International Relations, The Hebrew University of Jerusalem.  His interests lie in the field of emotions and politics, autoethnography and IR, and investigating the peculiarities of power, so to speak, in various issue areas and fields. He is the author of Predators and Parasites: Persistent Agents of Transnational Harm and Great Power Authority (The University of Michigan Press, 2007), and The Politics of the Trail: Reflexive Mountain Biking along the Frontier of Jerusalem (The University of Michigan Press, forthcoming in 2014). His articles appeared in International Studies Quarterly, Security Dialogue, Security Studies, International Political Sociology and the Review of International Studies. At the Hebrew University he teaches courses on science fiction and on politics and autoethnography and IR.

The two days of the workshop were very intensive for me, in terms of both the many talks and conversations we heard and had, and in terms of the emotional weight I felt during these discussions. Some of the talks we heard were not easy to hear: people told about their personal experiences of places such as the “highway of tears” in British Columbia, Hawaii as a colonized space, or escape from worn-torn Eritrea. Other stories dealt with personal loss and the political meanings of grief; or, of opening up to the inner world of what I, and many other in the West, call “suicide bombers,” while they consider themselves as martyr soldiers; or, of the pain of Inuit people in Canada. But despite the sometimes difficult stories and realities, I felt I am full lungs breathing. I felt that the stories and the responses to them fill me with oxygen, almost literally.

We talked about the way stories and narratives can bridge gaps between people and enable us to reach out to the humanity of others. Yes, stories can be fabricated, manipulated, or exploited to reproduce hegemonic or dominating orders, some of the colleagues in the workshop reminded the participants. Stories can also serve a claim for authenticity, by virtue of the author/teller “being there,” while in many manners, there cannot be such a “there” from the outset. But stories, nonetheless, can create a strong sense of community, I felt. The more I heard the various talks, I realized that we live in a world that values distance and objectivity, but these values also contribute to human loneliness and atomization of societies. Narrativistic research not only challenges the traditional methods of writing in order to highlight various power structures that these methods ignore or do not capture fully. It can also have the potential to restore and to rebuild some sense of community among authors and their readers. By community, I do not mean only a professional community of academicians, which is often a small and closed one, but also a larger human community. Narrativistic writing, I felt during the workshop, can help people resist this institutionally – and structurally – imposed loneliness that is so characteristic of our times, both in academia and in broader society. Lonely people are easier to govern than people with a strong sense of belonging, connection, and community.

One of the most interesting conclusions I took from this workshop was Jenny Edkins’ comment (I hope that was indeed what she meant …) that while the state’s sovereign narrative is about completeness and continuity, a linear story in which there is a clear beginning and a path along which history continues, a path which the state – and I may add in a Foucauldian manner, its admirers/reproducers in academia – purport to know, in many political and historical situations reality is wounded and full of gaps and crevices. Narativistic writing acknowledges these gaps and irregularities, disrupts the linear narrative, but at the same time offers some comfort by engaging in a process of writing about the wound and, no less important: letting the wound write us back.

Indeed, writing about my own wounds and letting them write me back is an essential part of my autoethnographic work. END_OF_DOCUMENT_TOKEN_TO_BE_REPLACED