For this fourth post in our symposium on John M. Hobson’s The Eurocentric Conception of World Politics, TDOT is delighted to welcome a response from Brett Bowden, Associate Professor of History and Political Thought at the University of Western Sydney.  The first three posts included an introduction from the author, and responses by TDOT’s Meera and Srdjan. In the next few days we look forward to a response from the author.

Let me begin by stating what will soon become obvious: this is not a book review of John Hobson’s The Eurocentric Conception of World Politics. The earlier posts from Meera and Srdjan have done an admirable job of engaging with the book in greater depth than I intend to here. Given that this is a blog, I will lay my cards on the table upfront – I’m a fan of John Hobson’s work. And I’m a big fan of The Eurocentric Conception of World Politics, which probably comes as no surprise to anyone remotely familiar with my own Empire of Civilization (all three of you). More specifically, I largely agree with the general tone and thrust of John’s book and the larger points he seeks to make about Eurocentrism. I don’t always agree with the details or finer points, but I too don’t want to split hairs. For instance, as John notes, I am not so kind to Kant, as I think his Lectures on Geography cast a doubt on some of his cosmopolitan claims and anti-imperialist credentials. But this is a minor difference of opinion that has no real bearing on the larger points being made about Eurocentrism and the study of world politics, or more specifically, international theory, for there is a difference.

As noted in an earlier posting, similar observations could be made about the humanities and social and behavioural sciences more generally, which is where, as an undergrad, I was first struck by Eurocentrism, albeit probably without knowing it by name. I can’t recall all of the details, but it was in a small seminar (only three students and a lecturer) on political philosophy where something we were reading and some comments on it struck me as rather odd; I made a point of raising my objections, which were dismissed by my three interlocutors, and I recall thinking to myself: ‘Wow, people still think like that’ – and well-educated people at that. Yes, Eurocentrism, along with a few other accompanying -centrisms are alive and well. This book won’t be the death of Eurocentrism, but hopefully it will shine a light in to some of the darker corners of the discipline and help to open the eyes and ears of a new generation of students and scholars. Which brings me to my purpose here; given that I’ve said I’m not exactly reviewing the book.  The Eurocentric Conception of World Politics and some of John’s earlier work has done a great service in bringing contentious issues to the fore where they can be debated openly – and now that John has opened up the can of worms, I’m going to jump on the bandwagon, get on my soapbox and ride on his coattails. END_OF_DOCUMENT_TOKEN_TO_BE_REPLACED

Saif Gaddafi (PhD, LSE, 2008) has lost a lot of friends recently. Even Mariah Carey is embarrassed by him now. The institution to which I have some personal and professional attachment is implicated in a number of intellectual crimes and misdemeanours, as may be a swathe of research on democracy itself. Investigations are under way, by bodies both official and unofficial. All of this now feels faintly old-hat (how much has happened in the last month?), even rather distasteful given the high politics and national destinies currently in the balance. So let the defence be pre-emptive: the academy has political uses, and those with some stake in it need feel no shame in discussing that. If crises are to be opportunities, let us at least attempt to respond to them with clarity and coherence. After all, our efforts are much more likely to matter here than in self-serving postures as the shapers of global destiny. 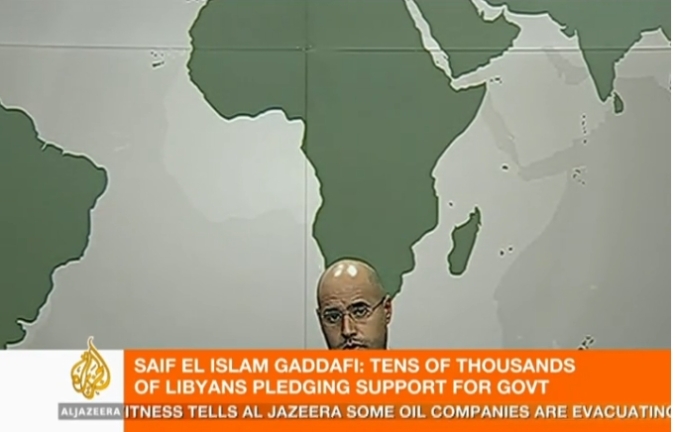 Saif’s academic predicament is both a substantive issue in its own right and a symptom. As substance, there is now a conversation of sorts around complicity and blame. Over the last weeks, David Held has appealed for calm and attempted a fuller justification of his mentorship (Held was not the thesis supervisor and Saif was not even a research student in his Department at the time, although he, um, “met with him every two or three months, sometimes more frequently, as I would with any PhD student who came to me for advice”). Most fundamentally, it was not naivety but a cautious realism based on material evidence that led a pre-eminent theorist of democracy to enter into what we could not unreasonably call ‘constructive engagement’. [1]

Held characterises the resistance of Fred Halliday to all this as reflecting his view that “in essence, [Saif] was always just a Gaddafi”, which of course makes him sound like someone in thrall to a geneticist theory of dictatorship. The actual objection was somewhat more measured, and, if only ‘in retrospect’, entirely astute: