A guest post from Ida Danewid. Ida is a PhD candidate in International Relations at the London School of Economics and Political Science. Her work focuses on decolonial theory, global ethics, and the politics of solidarity. She is the editor of Millennium: Journal of International Studies vol. 45, and the forthcoming special issue “Racialized Realities in World Politics”. This post is based on her article White Innocence in the Black Mediterranean: Hospitality and the Erasure of History which won the 2017 Edward Said Award.

On the evening of the 3rd of October 2013, an overcrowded fishing boat carrying more than 500 migrants sank off the coast of the Italian island Lampedusa. Amongst the 368 found dead was an Eritrean woman who had given birth as she drowned. The divers found her a hundred and fifty feet down in the ocean together with her newborn baby, still attached by the umbilical cord. Her name was Yohanna, the Eritrean word for “congratulations”.

Over the last few years the Mediterranean migrant crisis has provoked numerous responses and activism; ranging from Ai Wei Wei’s life vest installation to Pope Francis’s “day of tears”, from radical activist campaigns such as “The Dead Are Coming” to Jason deCaire Taylor’s undersea sculpture museum, from the silent minute in the European parliament to #AlanKurdi. Seeking to counteract the rise of populist, far right, anti-immigrant, xenophobic, and racist political parties, a variety of scholars, activists, artists, and politicians have called for empathy and solidarity with the fate of shipwrecked migrants. By recognising and publicly mourning the lives that have been lost, they seek to “humanise” those who, like Yohanna and her baby, are swallowed by the turquoise-blue waters of “Our Sea”.

In international theory, these expressions of solidarity have been paralleled by a growing interest in the question of who and what counts as human. A longstanding area of concern for post- and decolonial thought, poststructuralist and feminist theorists have increasingly begun to interrogate the normative frames that cast some lives as waste, bogus, and non-human. Responding to an era shaped by the global war on terror and securitizing discourses that figure the nation-state as a body under threat, thinkers such as Judith Butler and Stephen White have argued for a new humanism, based not on the rationalist sovereign subject central to liberal political theory, but on notions of loss, grief, relationality, and bodily vulnerability. Calling for a “reconceptualization of the Left” based on precariousness as “a shared condition of human life”, Butler argues that mourning and vulnerability can serve as the new basis of political community, enabling a “we” to be formed across cultures of difference. Applied to the context of the European migrant crisis, this is an ethic of hospitality that seeks to disrupt nationalist protocols of kinship and that points towards new forms of solidarity beyond borders. As the contributors to a recent special issue on “Borders and the Politics of Mourning” make clear, grief for unknown others—for migrants—offers a radical challenge to the xenophobia and white nationalism that underwrite the necropolitical logic of the European border regime.

My research interrogates what such critical humanist interventions produce and make possible—and crucially, what they foreclose and hide from view. Building on what some activists, artists, and academics have begun to call “the Black Mediterranean”, I argue that these responses are indicative of a general problematique, endemic to both leftwing activism and academic debate, which reproduces rather than challenges the foundational assumptions of the far right. By privileging a focus on the ontological—as opposed to historical—links that bind together humankind, these ethical perspectives contribute to an ideological formation that disconnects histories that are intimately connected, and that removes from view the many afterlives of historical and ongoing colonialism. With that, questions of responsibility, guilt, restitution, repentance, and structural reform are turned into matters of empathy, generosity, and hospitality; what Hannah Arendt describes as a politics of pity rather than justice. The result is a veil of ignorance which, while not precisely Rawlsian, allows the white subject to re-constitute itself as “ethical” and “good”, innocent of its imperialist histories and present complicities. 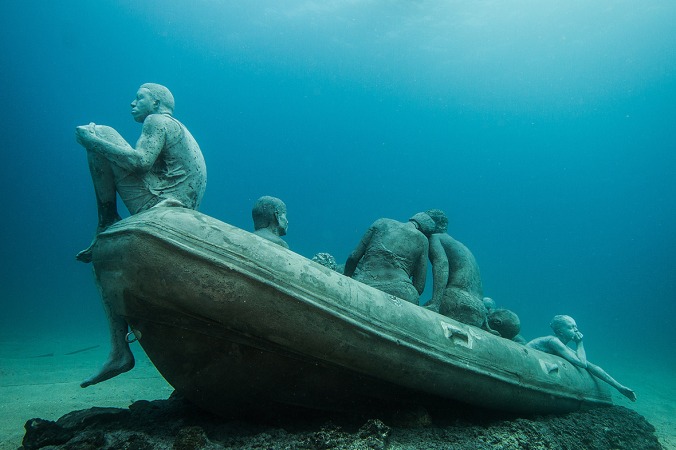 The term the “Black Mediterranean” has recently started to surface amongst academics, artists, and activists to describe the history of racial subordination in the Mediterranean region. Inspired by Paul Gilroy’s Black Atlantic, the “Black Mediterranean” invites us to place the contemporary migrant crisis in the context of Europe’s constitutive history of empire, colonial conquest, and transatlantic slavery. Viewed from this perspective, the migrant crisis is not a moment of exception or a discrete event in time: rather, it is a late consequence of Europe’s violent encounter with the Global South. The philosophical disappearance of this history has served as a bedrock for contemporary discourses of migration, solidifying the belief that the Mediterranean crisis originates outside of Europe—and that Europe, as a result, is an innocent bystander. This overlooks that the majority of migrants seeking asylum in Europe are coming from countries that until recently where under colonial rule. Libya and Eritrea were Italian colonies until 1947; Somalia was ruled by Italy and Britain until 1960; Syria was a French protectorate under the Mandate System until 1946; Britain invaded and occupied Afghanistan three times until formal independence in 1919. From the days of colonial conquest and genocide, to the economic exploitation under the Mandate System, to recent years’ interventions in Afghanistan, Iraq, and Libya, any serious consideration of what lies behind the surge of migrants into Europe must account for this colonial history and the way in which it continues to structure the present.

I argue that a focus on the “Black Mediterranean” not only unravels the various ways in which racial violence is structurally linked to the emergence of European modernity. More than that, it also sheds light on how recent calls for liberal hospitality, empathy, and affective identification with the fate of migrants function as a continuation of, rather than challenge to or break with, the key premise of populist, far right, anti-immigrant, xenophobic, and racist political parties. By foregrounding the spectacle of death and suffering—emblematised by the circulation of the picture of 3-year old Syrian refugee Alan Kurdi, lying dead and abandoned on a beach in Bodrum, Turkey—pro-refugee activists call on European citizens to open their hearts, and to feel compassion and empathy with the suffering of migrants. While many of these interventions offer powerful challenges to the xenophobic discourses that present migrants as a form of danger (to Europe’s security, welfare state, women, and so on), they continue to frame the Mediterranean crisis as a problem of inhumane Frontex policies and a society that turns a blind eye to suffering. A more historically grounded reading of the crisis would disrupt these assumptions, and unveil the umbilical cord that links Europe to the migrants washed up on its shores. Overall, these interventions do little to challenge established interpretations that cast migrants as “uninvited guests”, “charitable subjects”, and “strangers at our door”.

This not only obscures Europe’s role in having created the conditions which, in part, have set in motion the migration of today; it also contribute to the construction of a particular cultural narrative—of European goodness, humanity, and benevolence. As Khalil Saucier and Tryon Woods have argued, this kind of activism might ultimately not be about migrants at all but, rather, “about constructing a new European citizen” by highlighting the difference between “good whiteness” (tolerant, multicultural, liberal) and “bad whiteness” (fascist, white nationalist). Dead migrants here function as the conduit through which a more positive, cosmopolitan, and empathetic European identity can be created, one that supposedly is attuned to the suffering of all of humankind, but which in reality is concerned with saving Europe for itself. In other words, by erasing Europe’s colonial past and its neocolonial present—and with that, the responsibility that Europe bears for the bodies on its shores—the European subject is able re-constitute itself as “ethical” and “good”, innocent of its imperialist histories and present complicities. Hence the focus on migrants that are dead, with sentimental stories of innocent children washed up on shores, and with mothers who drown while giving birth—that is, with bodies that cannot speak back. If the migrant crisis, as Zygmunt Bauman has suggested, “is humanity’s crisis”, then this raises questions about whose humanity is at stake and, indeed, for what purpose.

All of this, I want to suggest, points to a broader problem that extends beyond the choppy waters of the Mediterranean. This is a problem which is endemic to the Western tradition of ethical theorising, including liberal (rationalist, sovereign) as well as poststructuralist (vulnerable, mortal) strands. Indeed, while these traditions are grounded in different ontological understandings of the human condition, they agree that ethics must have such an ontological foundation. The paradox is thus that, although poststructuralist thinkers such as Butler and White are deeply critical of the abstract subject that anchors liberal ethics, their own ethical formulations operate behind a similar veil of ignorance: that is, behind the generalized and anonymised suffering of a generic humanity. The focus on the ontological condition of vulnerability therefore leads to a similar erasure of history, because it substitutes abstract humanity for historical humanity.

In the context of the European migrant crisis, such a framing has lead to an ethics based on mourning and welcoming migrants as universal humans—rather than as victims of a shared, global present built on colonialism, racism, and white supremacy. This choice is not innocent because, as Gurminder Bhambra reminds us, “addressing particular sets of connections leads to particular understandings”, and as such it is imperative to consider “why certain connections were initially chosen and why choosing others could lead to more adequate explanations”.[i] What, we must therefore ask, might it mean to rethink global ethics and solidarity on the basis, not of the connections forged from the ontological universal experience of vulnerability and mourning but, rather, of the shared, intertwined histories that arise out of the colonial past and the neocolonial present? Asking such questions would mean shifting the focus, away from the interconnectedness and oneness of humanity—metaphorised by the umbilical cord that connects Yohanna to her lifeless baby—towards the entanglements that link Europe to the diverse regions from which migrants and refugees are coming. In the words of Stuart Hall: “They are here because you were there. There is an umbilical connection. There is no understanding Englishness without understanding its imperial and colonial dimensions.”[ii]

8 thoughts on “White Innocence in the Black Mediterranean”