Between 19-21 September 2014, resident blogger Wanda and King’s College partner-in-crime, Nicholas Michelsen, organised a workshop with the theme of Solidarity & Resilience at King’s College, London. Before the special issue hits the stands, we have gathered for our readership a small forum of contributions to sample some of the hot topics discussed over that weekend. The organisers would also like to use this opportunity to thank all those who participated in the event. It was really a tremendous gathering that shattered many old ideas and made possible new ones! 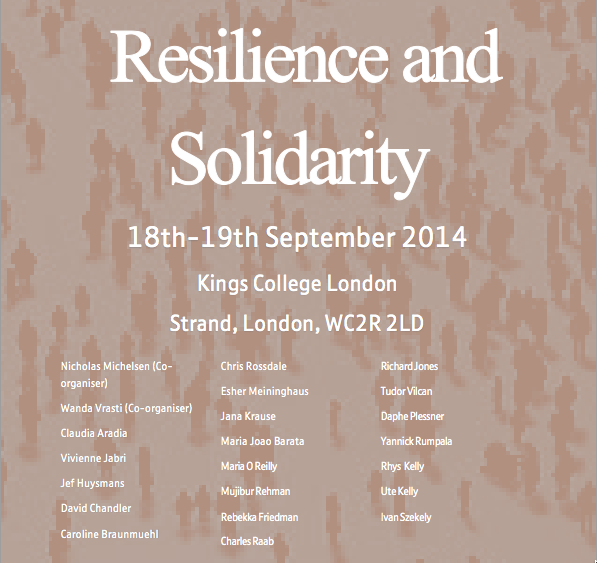 As most good things happen, the “Political Action, Resilience and Solidarity” workshop was born over post-conference drinks. A few of us were musing over the proliferation of the term resilience at the 2013 EISA in Warsaw, when someone chimed in the concept’s obvious rival, solidarity. Had we forgotten about this term? Perhaps even declared it dead? The level of excitement grew and we just knew we had to organize an event about this strange pair. Exactly one year later, we met again at King’s College in London, with much appreciated support from the Open University and Westminster University, to unpack the hidden genealogies of these two concepts and muse over their possible associations/combinations.

We hosted panels approaching the matter from the perspective of political theory, conflict studies, governmentality and social movements. In almost every case, resilience appeared to be more malleable (sometimes infinitely malleable perhaps to its detriment and our suspiciousness), befitting contemporary challenges, and just plain… resilient. Solidarity, on the other hand, required complex theorizing, lacked a practical anchoring, was at times entirely absent from some panels, and made a strong comeback only on the closing roundtable thanks to the benevolence of some Marxists speakers.

Certainly, we would not want to do something as simplistic and rash as to declare a winner. Practices of solidarity would certainly benefit from a dose of resilience, and investments in resilience would certainly be a lot richer if they drew upon the latent democratic culture and transformative impetus of solidarity. But it was hard at the end of the two-day event to not feel like we had found ourselves on the threshold between two worlds. There is a great force pushing against the spirit of Enlightenment thinking, with its “enthusiasm for revolution” and its half technocratic, half romantic belief in human-led progress and perfectibility. That force is variously known as complex systems analysis, new materialism, flat ontology or the Anthropocene, all of which describe a connectivity-volatility-fragility nexus for which resilience emerges as the proper mode of action.

Resilience-thinking comes out of left-wing, libertarian and ecological critiques of Cold War “command and control” logistics, that strange blend of thinking that connects the California counter-culture to the Silicone Valley cyber-culture. 70s complex system theories rejected the notion of epistemological certainty and equilibrium, proposing instead an ontology of permanent turbulence, incomplete knowledge and unknown futures. Where crisis becomes a constitutive feature of complex life that cannot be prevented or predicted, as is the case for the Anthropocene (more aptly called, the Capitalocene) or the secular crisis of capital, the best we can do is become reslient.

Production in the Desert. (“Workers of the World, Disperse”). In Supplement to the Whole Earth Catalog, January 1971.

Resilience is the ability of an organism or system to absorb changes and bounce back after external shocks, whilst maintaining some sort of equilibrium. It is an attitude of constant preparedness for emergency and precarity, otherwise agnostic about the causes of crisis or the direction of change. According to Jeremy Walker and Melinda Cooper, resilience is “the acceptance of disequilibrium itself as a principle of organization.” Climate change fits this description best, but increasingly also cybernetics, ecology, neoliberal economics and public management.

What’s more, resilience is resilient. It is a highly adaptable and expandable concept. It means endurance, preparedness, adaptability, ingenuity, activation, expansion, collective intelligence, and even democratic mutualism (for a study of “resilience from below” see Rebecca Solnit’s A Paradise Built in Hell). Resilience can be positive (a resistance movement can be resilient to repression) or negative (patriarchy can be resilient). It can even be a virtue (resilient resistance). It can apply to humans, non-human life, machines and geological matter or to a composite of all of the above.

But can it be a politics, or provide a conceptual locus for political action?

Walker and Cooper argue that resilience has established itself as “a pervasive idiom of global governance” because it is an intuitive fit with the neoliberal doctrine of there being no alternative. Resilience seems to resonate with a number of governmental priorities indicative of the neoliberal societies we inhabit. The injunction to become-resilient seems to suggest, quite strongly, that we need to accept the closure of substantive debate about the future of the social orders we inhabit, and rather accept much of what now appears as a concrete structure at the end of history. In this sense, the concept seems to sit in a kind of historical opposition to the core left-wing activist concept of solidarity, which implies that collective action can make a better, more equal, fairer or deterritorialized social order.

Suddenly, with resilience, the question no longer seems to be: Do we agree with the way the world is organized? Does it conform to our conception of the good life? And if not, how do we change it? The question becomes rather: How do we develop counter-conducts or counter-capabilities to either cope with or withstand powerful forces outside our control? There is a paradigm shift here from labeling exceptional events as “unacceptable” to accepting them as “immutable.” From an Enlightenment view, this might strike one as a bowing out from politics or a redefinition of politics away from familiar (anthropocentric, language-based) parameters of representation, deliberation, contestation. 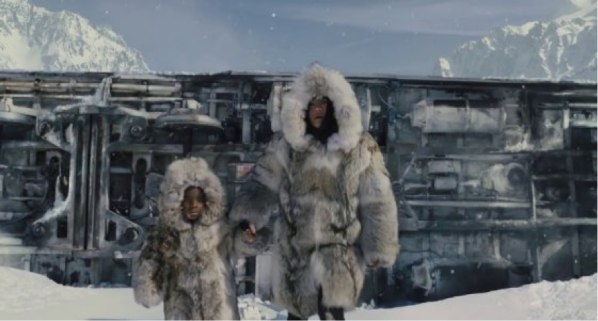 If we define politics as antagonism or contestation, as we have been used to within the Enlightenment tradition, which left-oppositional thinking is certainly a part of, resilience implies something accommodating (even acquiescing): it provides a stabilizing force in a world of turbulence and uncertainty, or, in the language of IR, it allows for continuity amidst anarchy. At the same time, resilience does not shy away from change. It is only agnostic about its content. To be resilient is not to close off the new. It’s to be able to change in the face of shocks without incurring a wider collapse. The most resilient system is one that is permanently directed at transformation, and has no interest in predefined goals, aims or ends. It is concerned only with the continuation of process. Resilience is resilient precisely because it assigns no particular, or indeed absolute, good in the “process of transformation.” Change “as such” has no immanent political qualities. Capitalism is resilient as a form of social organization precisely because it permanently evolves, axiomatically learning from that which injures or threatens it. Capitalism particularly likes revolutionaries in this context; they have all the best material.

By comparison, solidarity looks like a rigid modality from a bygone era. Where are the large working-class organizations, the culture of workerist pride, and the mass culture to provide a common metalanguage in which concepts like solidarity would even make sense? Solidarity seems to imply a kind of coherence of identities and interests, which critical theory of late has deconstructed in favor of “multitudes of singularities,” “whatever communities” or a “common ground without a common subject.” To the extent that we can speak of solidarity in these times of neoliberal counter-revolution, it might even be more appropriate to speak of negative solidarity, that sneaking suspicion that our fellow citizens are not pulling their weight or that the labor aristocracy acts as a dead-weight on a system, which, if freed from its obligations to the state and its union protégées, could produce a lot more lottery winners.

Sibylle Bergemann: Marx-Engels-memorial (for Berlin-Mitte) in front of the atelier of Ludwig Engelhardt Gummlin, Usedom, Mecklenburg-Vorpommern, May 1984, GDR.

Where solidarity is not yet exhausted is perhaps in its virtual capacity, which following D&G, are not less real than actual capacities, only un-actualized capacities to affect and be affected that require particular attention to excluded knowledges and fragile voices. If resilience is about connectivity-volatility-fragility, solidarity is about commonality and counter-power: the common of creative cooperation, the common of collective spaces and stewardship, the common of democratic self-determination, etc. These are common things that still need to be produced or which are lying dormant underneath the pavement, so to speak. They are an image of our future. This is what ultimately makes solidarity political: this virtual quality of a politics of the not-here-yet. The order of things is contested from a place, which is both undecided and necessary. Politics comes from outside the normative order, from a sense that things could be different and that we could be other.

Finally, solidarity becomes truly interesting when it brings together non-equals (e.g., Palestinians and Israeli anarchists; migrant workers and indigenous people; those who have something to lose and those who have nothing) – difference, inequality, and hierarchy being something which resilience cannot register. Here, the common needs to be brought into being not just through deliberation and negotiation (a largely discursive, rational process), but also through a certain stripping bare of the rights, privileges and micro-powers, acquired through the expropriation or violation of the common, a certain decolonization of the self for common purposes. Self-liberation might be the goal, but this is not necessarily a restorative, cleansing process (e.g., “white guilt”). Unlearning privilege is discomforting, a lot of hard work, and might indeed require a certain measure of resilience.

It might very well be that resilience has no politics in and of itself, but the question of “how” the new is folded into the old, which it raises – how a community changes over time, for example – is an important one. If solidarity is to have a place in post-representational politics (post-state, post-proletariat, post-people), perhaps the question of “Resilience and Solidarity” should be a pragmatic one: How can we make these concepts work for us, what can they do together? In the context of the multitude, the mob and the transindividual informational composite of sensory-body-technology-bio-matter, resilience might not be so free from riotous political possibilities at all.

6 thoughts on “Solidarity and Resilience: A Forum”