[Text of a short talk presented at Socialism and Deindustrialisation event put on by Spring. See Michael Roberts’ write-up of his talk here.]

“In fact, the realm of freedom actually begins only where labour which is determined by necessity and mundane considerations ceases; thus in the very nature of things it lies beyond the sphere of actual material production.”

I want to argue today that only deindustrialisation can lead us beyond capitalism, or in other words, that post-capitalism will necessarily be post-industrial. [1] This means that rather than bemoan the loss of manufacturing jobs, or struggle to lure them back, deindustrialisation should instead be applauded as an important and irreversible achievement. Historically speaking, it is akin to the move away from agriculture-based economies. Just as the mechanisation of agriculture freed people from reliance on working the land, the deindustrialisation process has the potential to free people from the drudgery of most productive work. Yet an immediate consequence of claiming that deindustrialisation is necessary for post-capitalism means we must reimagine what the transition between economies might be like.

The traditional story of moving beyond capitalism is fairly straightforward. To be sure, this story has been complicated and critiqued throughout the 20th century, yet its general framework still underpins a number of assumptions about how to transcend capitalism. In broad strokes, the story begins with a shift away from agriculture-based economy which had been built around a large peasantry. In its place emerges rapid industrialisation – exemplified by the textile, steel, and eventually automobile industries in the 19th and 20th centuries. The social effects of this industrialisation were particularly important for understanding how post-capitalism was supposed to come about. Industrialisation involved a move from rural populations to increasing urban populations, along with a transformation of the peasantry into the proletariat, involving primitive accumulation and the dispossession of common land. The result of this was a new urban working class who had only their labour power to sell. But this transition also led to the development of a strong working class. Factories meant that workers were increasingly centralised in the workplace – they worked together, creating social connections and community. Moreover, the tendencies of capitalism were supposed to increasingly homogenise the working class. The result of all this was that the working class came to share the same material interests – things like better working conditions, higher wages, and shorter working weeks. In other words, with industrialisation there was the material basis for a strong working class identity. (It’s worth noting here, that despite this material basis, the industrial working class was always a minority of the working population. Even at the height of manufacturing in the most industrialised countries, employment in manufacturing only involved about 40% of the population.[2]) On the basis of their political strength though, the working class was supposed to become the vanguard of the population, leading us away from capitalism and towards something better. With the growing power of the working class, and the socialisation of production, it was thought that workers could simply take over the means of production and run them democratically and for the greater good.

Of course, this didn’t happen, and the best example we have of this proposal was the miserable Soviet experience. What occurred in that experiment was a glorification of productivity at the expense of freedom. Just as in capitalist societies, work was the ultimate imperative, and it was no surprise to see Taylorism, Fordism, and other productivity-enhancing techniques being forced upon the workers of the USSR. In the capitalist countries, by contrast, the industrial sectors declined and the basis for a strong working class has been systematically attacked. Yet if we look at developing countries, the traditional story finds little traction as well. Even developing countries are increasingly deindustrialised. This can be seen in two broad facts: first, newly industrialising economies are not industrialising to the same degree as past economies (measured in terms of manufacturing employment as percentage of population). Rather than 30-40% employment, the numbers are closer to 15-20%. Secondly, these economies are also reaching the point of deindustrialisation at a quicker pace. Measured in terms of per capita income levels, these economies reach their peak industrialisation at a much earlier point than previous countries did.[3] This is the so-called problem of “premature deindustrialisation”. The conclusion to draw from the experience of the 20th century is that the promise of the traditional narrative – the industrial working class leading a revolution to democratic control over the means of production – has not been fulfilled and seems to now be obsolete. We no longer live in an industrial world, and classic images of the transition to socialism need to be updated. 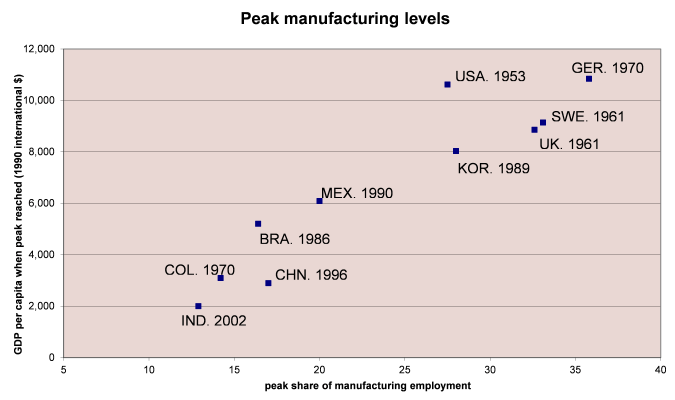 So what is the alternative? Can we still imagine a transition to something beyond capitalism, or have the very conditions of socialism evaporated into history? What does the transcendence of capitalism mean if not simply working class control over the means of production? I want to take my cue of what post-capitalism might entail from a quote of Marx’s:

“In fact, the realm of freedom actually begins only where labour which is determined by necessity and mundane considerations ceases; thus in the very nature of things it lies beyond the sphere of actual material production.”

What is invoked here by Marx is that the realm of freedom is beyond both material production and the centrality of work to society. Deindustrialisation, insofar as it means the replacement of human labour with increasingly mechanised and automated labour, is therefore a necessary step to something beyond capitalism. Deindustrialisation is the only way in which we escape the imposition of work, as it enables us to outsource production to machines. Importantly, deindustrialisation also appears to be the only way to achieve a society of abundance and leisure time. Without it, one falls into two possible alternatives: either, expanded free time but with generalised poverty (primitive communism), or increasing abundance at the cost of authoritarian work (Soviet communism). If we are to avoid these outcomes, the automation of manufacturing and productive work in general is a necessary step to building something beyond capitalism. Deindustrialisation is, in other words, a necessary stage to move beyond capitalism. I want to conclude with the argument that if we change our understanding of how to get beyond capitalism, we end up having to revise a few other assumptions as well. 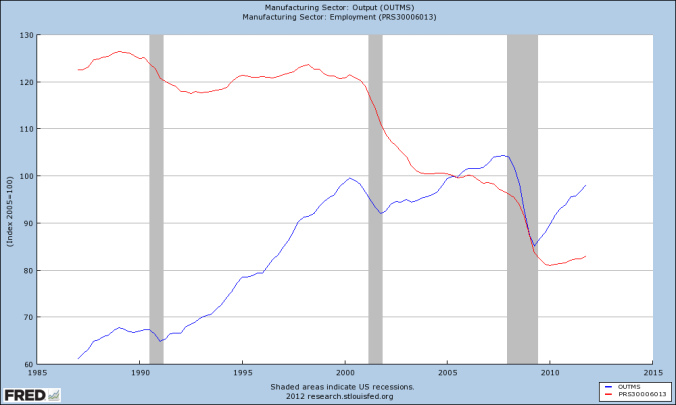 In the first place, as I mentioned at the start – we should accept that manufacturing is gone, and this is a good thing. If we look at efforts to draw manufacturing back, they are typically achieved by decreasing wages and generally attacking the conditions of workers. More recently, there has been a return of some textile factories to America, but only under the condition that they are highly automated (the phenomenon of “reshoring”). The second conclusion is that we need a cultural shift which displaces the priority given to work. Jobs and work cannot be central to our society and to our identities. We can see the effects of this belief everywhere: for example, the demonization of the unemployed and poor, the consensus goal being jobs for everyone, and the glorification of ‘hard-working families’. Everywhere, work is the dominant motif of our societies. Ultimately, the aim here needs to be a delinking of wages from work. Human societies are rapidly reaching the point where there simply isn’t enough work to go around for everyone, even if that were a morally virtuous goal. Everywhere there are symptoms of a rising surplus population – the unemployed, the underemployed, the precarious, and the absolute surplus indexed by global slums and mass incarceration. Society will have to face up to the problem of surplus populations and deindustrialisation sooner or later. And the basic parameters of that debate are either to manage and control the surplus populations (via mass incarceration, or spatial segregation in slums, or outright expulsion from society), or to work towards establishing a sustainable post-work society. The latter goal would mean reducing the working week and mobilising around implementing a universal basic income. Those goals, I believe, are the only way forward. This will involve control over the means of production, but not in the way the classical story tells it. It will not be a matter of control over workers in the search for greater and greater economic growth, but rather control over a largely automated system of production and circulation with socialised aims.

Of course, all of this won’t come about easily – which is where we need to reimagine the sources of political agency in a deindustrialised world. A final consequence of the new transition narrative, therefore, is that class agency is more complex than just rebuilding a workers’ movement. The industrial working class cannot be the agent of change. Or to make an even stronger claim – not only can the industrial working class not be the agent of change today, it never could have been the revolutionary subject, since its existence was premised upon material conditions that had to be eliminated in the shift to post-capitalism. The necessary stage of deindustrialisation means that the industrial class loses its unity in the process – it fragments and falls apart, as we’ve seen in recent decades. In its place, though, arise new class formations. Key amongst these is the precariat – that class which relies on part-time jobs, contract work, freelance work, informal work, temp work; which has an income that barely sustains their livelihood, let alone that of their families; or which is unemployed or underemployed. Today, this category describes an increasingly large group of people. They are at the sharp edge of capitalism dynamics – a world which demands people work for survival, yet which is increasingly incapable of generating that work. Having experienced the tensions of capitalism, it is groups such as the precariat which may form the basis for a renewed class politics

So, in conclusion, deindustrialisation is necessary for post-capitalism – it is something to be applauded and not nostalgically lamented. The future must be oriented towards a post-work society, but getting there will involve acknowledging class has changed, and that political power must be rethought.

[1] Throughout this I prefer to use the generic term ‘post-capitalism’ rather than the more historically laden and specific terms ‘socialism’ and ‘communism’. This indexes the fact that the future society to come is both different from previous experiments, and open-ended as to its exact determinations.

12 thoughts on “Post-Capitalism Will Be Post-Industrial”