The final post in our mini-forum on critical methodologies and narrative in IR. The series is closed by Himadeep Muppidi, who is Betty G.C. Cartwright Professor of International Studies and Political Science at Vassar College, New York. He is the author, most recently, of The Colonial Signs of International Relations (Hurst and Columbia University Press, 2012). 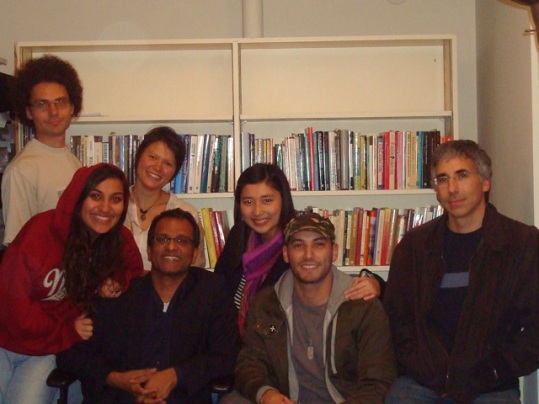 Himadeep (seated, fourth from left) with the ‘Vassar village’: students and faculty who were into story-telling.

I went to the York University workshop persuaded of the importance of the narrative turn in the field of international relations. I find literature in various forms useful in my teaching of international relations at Vassar, not least in opening my own provincial imagination to the worlds of others. Entering the international through narratives allows the class to engage political issues from the inside rather than pretending we were somewhere outside looking in or somehow beyond the concerns of those whose worlds we safely theorize. Narratives in different forms – novels, memoirs, short stories, and autobiographical essays – also allow for insightful translations of contemporary contexts. After soaking oneself in the nuance and complexity of narratives, conventional accounts of IR appear lifeless and boringly schematic in their attempts to straddle (our) humanity. They perish, unseen and unmourned, on the classroom floor.

But the discussions in the workshop helped me realize that narratives on their own are not enough. We need critical theories to go along with the current turn towards narratives. Colonialism too sustains itself on effective story-telling and not just brute force. It has a robust history of accumulating, systematizing and circulating its stories, not least to those citizen-subjects it narrates as its benevolent and heroic center. In IR, we often claw our way out of these archival dumps searching for fresher, more humane, worlds.

In the wasteland that is conventional IR, stories of any sort might appear, at first glance, to offer a welcome respite. But there is also, as some of our fellow disciplines can attest to, a politics of story telling: whose stories do we get to hear all the time; whose stories are generally inaudible; how do stories make us over; whose mansions do stories furnish with humanity in every remote room and whose huts do they deprive of life and dignity. Perhaps we need to explore these inequities of the political terrain more even as we take the narrative turn seriously. The question I left with from the all too brief workshop, one that is not a new one by any means, was: How can we, in IR, engage better the diverse worlds of the human international, as they come to us through narratives, without losing sight of the politics of inequity staging their appearances and disappearances?

And there I would have stopped but Naeem Inayatullah encourages me to say more. He wonders if what I am saying is: “No matter the turn, it will be dominated by Europe. So what can we do to give the narrative turn a chance at something else?” I am unsure if it is Europe’s renewed domination of the wasteland that bothers me as much as the prospect of another lost opportunity to plough newer terrain.

Maybe I should defer to the voice of a better storyteller. In a 2009 TED talk, Chimamanda Adichie speaks to what she calls the ‘The Danger of a Single Story’. In this short, approximately 20 minute presentation, Adichie draws our attention to a number of issues relevant to our thinking about stories and storytelling: to how “impressionable and vulnerable” we all are in the face of stories, to how the British and American stories she read as a child opened her imagination and at the same time shaped her childhood writing so much that the stories she wrote, even as she grew up in Nigeria, were of British and American worlds (filled with discussions of the weather and ginger beer). Reading stories by writers such as Chinua Achebe, she tells us, brought her to other worlds in which she could recognize characters like herself. Adichie is appreciative of the ways in which British and American stories opened up her world even as she highlights the dangers of knowing only those stories. This is not just an inter-country issue either.

Even the Nigerian context she imbibes as a child is not shaped by a single story though it takes her a while to realize this. There are subaltern worlds here (the world of the domestic help for instance) that she sees only in a thin and caricatured form at first since the story of “their” poverty dominates her imagination and occludes all their other ways of being human. Adichie insightfully connects stories and storytelling to questions of structural power and narrative homogeneity: our socially learned capacities to hear and tell diverse and plural stories of one’s own world while hearing and re-telling only single stories of the other. Adapting Adichie, I wonder if, given the social structures of teaching and learning IR that we currently inhabit, the narrative turn would only result in a renewed cycle of seemingly new stories about the diversity and humanity of Europe and single and simple stories about its Others.

But Naeem’s question continues to smile at me: “So what can we do to give the narrative turn a chance at something else?” It knows that I haven’t responded fully to it yet. I am tempted to say that I prefer to think with you all on that one. Maybe my partial response would be, in anticipation of a broader and longer conversation, that it is not writing alone but reading and teaching that we need to work further on. Maybe we need to begin by reading and teaching an international in which there are multiple other stories than the one or few we already know about IR’s others. Maybe that is the implicit promise of storytelling conceptualized, critically, as a politics of exile.

2 thoughts on “Reflections on Narrative Voice”