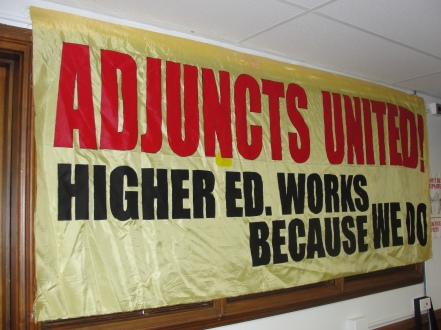 A recent piece by Michael Bérubé highlights one of the invisible problems of higher education in America (and elsewhere) – namely, the rise of the adjunct as the hegemonic form of the modern day academic. This is in both a qualitative way (with flexibility and monetization becoming some of the prime measures for every academic), but also in a quantitative way (Bérubé cites data that shows more than 2 out of every 3 faculty members are now contingent workers).

While American political discourse often portrays academics as highly-paid, impossible-to-fire liberals, the data in fact shows virtually the opposite (though admittedly academics are likely disproportionately “liberals”). Increasingly the expectation of graduate students leaving university is that:

(a) an academic position will be incredibly difficult to find (I have numerous anecdotes of friends applying for hundreds of jobs and only getting 3-5 interviews, let alone job offers)

(b) when a job is found, it will be contract work

(c) when a job is found, it will involve the workload of a full professor

(e) in a year (perhaps longer depending on the contract), this process will be repeated

The consequences of this situation are numerous and uniformly negative. The increased pressure on precarious teachers plays itself out in the classroom through less student engagement, more rote teaching, hasty evaluations of student work, and all sorts of other micro-political shifts that subtly shape how students emerge from the university today. These changes may play into management’s desire for more standards and more rote learning, but it’s at the expense of critical faculties.

This leads into Bérubé’s point about how adjunct teaching undermines the very notion that university teaching is a professional endeavour. The expectation that by going to university one is being taught by professionals is materially denied by the conditions of work: the lack of office space, the lack of library and journal access, the lack of time to spend on individual students, and so on. What Bérubé misses in this, though, is the ways in which this de-professionalization of the academic position fits comfortably with the overall shift of the university into a training centre. For anyone who sees the university as a(n always contested) space of potentially critical thought, this is anathema of course.

On a broader social level, Paul Mason has noted the rise of the “graduate with no future”. Generations of students had been told and believed that if they studied hard and worked hard, they would end up with a better life than the previous generation. This generation is the first to have to widely face up to the impossibility of this belief. Youth unemployment rose massively across the world after the 2008 financial crisis, but as the chart below shows – nothing has improved since then. Sociologically speaking, contemporary graduates consist of a variety of different backgrounds, meaning that what affects the student population (heightened dreams, collapsing reality) extends via social diffusion and affects the entire populations: low-income groups to upper class groups. 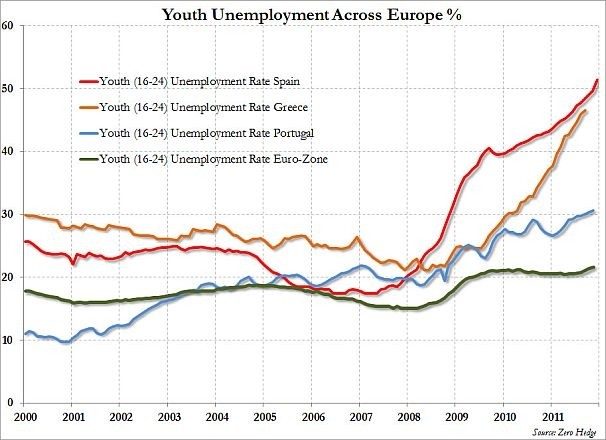 While there are some specificities to the modern-day academic, we should be under no illusions that we’re alone in this situation. The figure of the adjunct is a mere instantiation of a more general phenomenon. Rather than producing industrial commodities (classical labor), or creating informational and cultural content (immaterial labor), or being part of a particular income group (the 99%), the modern worker in general is defined by precarious existence. Precarious existence means not simply part-time, flexible and temporary work; it also includes the unemployed in a world where the social safety net is being cut, and it includes full-time permanent workers who have minimal savings in a world of hefty household debt. The former live a quite clearly precarious existence, surviving benefit cheque to benefit cheque. Yet the latter also lives precariously, insofar as any disruption to their lives (e.g. a job layoff, a surprise medical expense, etc.) will plunge that household into their own private austerity. The chart below shows a US indicator of this trend towards less savings and more precarity, while a recent report out of the UK found that 28% of all households had less than £250 in total savings – sufficient to last 5 days. Recognizing that precarity is an existential condition reveals that despite the fragmentation of work, much of the world already shares the condition of being “indebted, insecure, and vulnerable“. The only question left is how to mobilize this commonality to effect change.

With precarity being one of the main reasons why workers can’t reverse their loss of power (e.g. fear of lost wages from a strike, or fear of fighting back and being fired), a key point for any future organization has to be how to establish a system whereby the fears of precarity are mitigated. Some signs of how this organization might come about can be seen in the UK’s largest union, Unite, and their recent project to involve more unemployed people and students. There are tentative steps here to widen the standard working class constituency and mobilize the precariat more widely through, for example, education and legal support. A more thorough attempt to integrate the precariat into an organized movement, however, needs to somehow alleviate the affects of precariousness without at the same time simply replacing what should be the state’s function to provide a safety net.

Elsewhere, Mike Konczal has a nice piece on gender and the New Deal reforms in relation to precarity here.

And Jacobin magazine has a critique of the very idea here.