I’ve just returned from the “motherland” and bring tidings from a strange and far away place: Austerity, USA.

Gin and Tacos gave me a special gift just in time for Christmas. It seems the matriculating class of House Republicans have big plans for the country. The austerity fear mongering has reached new heights of hyperbolic cynicism as Republicans try to make it possible for states to declare bankruptcy. You can find details, with extra rage, here. The key points are that bankruptcy proceedings would allow states to renege on contracts with public sector unions and contract out public services, walk away from public sector pension obligations, and sell off public land, parks and buildings. A refutation of this obviously stupid and destructive policy, with the appropriate amount of anger and vulgarity, can also be found on Gin and Tacos, here. Finally, here’s the plan from the ideologues themselves, in case you thought we were making this shit up.

As if that were not enough to get the blood boiling, the incoming House Republicans have re-written the rules for the federal budget. The new rules will alter the current pay as you go scheme, which requires offsetting entitlement increases or tax cuts with tax increases or benefit cuts – which they did before in 2000, before the Democrats reinstate the rule in 2006. Geniuses that they are, the incoming Republican majority plans to eliminate the necessity of offsetting tax cuts – details here, and the actual new rules here. For the time being it seems that, at least in the US House of Representatives, we’ll be pretending that tax cuts do not cost money and are an effective way to cut the deficit and boost economic growth, all evidence to the contrary. When I add this to the pre-Christmas compromise on the Bush Tax Cuts, which not only extended an expensive and unwarranted tax cut to the wealthiest 2% of US taxpayers but also added an extra cut to inheritance tax as well, there is enough bad news here to push any angry leftist from thundering rage to child-like weeping.

Bravely overcoming my tumultuous emotional storms, the Republican attempt to bring down the Austerity Hammer in 2011 raises a number of questions that I want to highlight.

1. Are they actually so very concerned about the deficit, if so why? The supposed commitment to a balanced budget is completely at odds with their moves on taxes and on the House budget rules, while their plan to impose federal bankruptcy proceedings upon states not only refuses to take on the work of balance state budgets but also attacks their supposed core-commitment to state’s rights.

2. What logic is there to Republican tax policy, if any? The refusal to countenance any tax increase despite the deficit that they decry and the limited effectiveness of tax cuts to increase economic growth demands explanation, particularly the cuts Republicans are currently pursuing, which go exclusively to the very wealthiest Americans.

3. Most importantly, and most self-referentially, what do these retrograde plans say about our chances of fighting the entrenchment of neo-liberal policy (and hypocrisy)? My co-bloggers have already raised this question: Nick highlighted the tendency of electorates to shift to the right when inequality is on the rise, and Roberto examined the connections between neo-liberal entrenchment and the political weakness of the working classes. 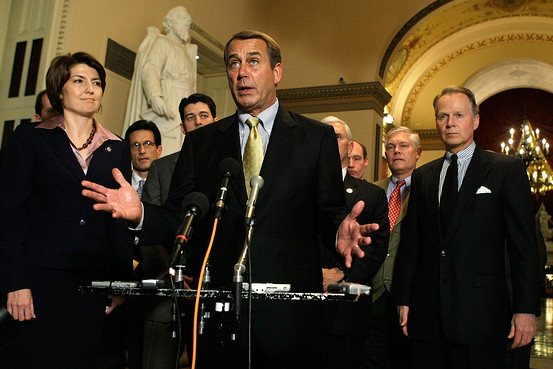 Regarding the Republicans, a number of conventional answers are available. As a large party, they have to balance a range of opinions on the right of US politics, which includes those with sincere, if deeply ideological, fear of and opposition to deficits, as well as those more interested in using the federal government to promote (serve) the interests of business and the very wealthiest individuals to encourage growth. Therefore, there is little reason to be surprised that Republicans sound the deficit alarm on the campaign trail but quietly ignore the ringing during working hours.

And even if we find that rationale unconvincing, which we should, a good many Republican legislators and voters likely do believe that (a) the deficit needs to be brought down as quickly as possible, (b) that cutting taxes will encourage growth, and (c) that public spending is wasteful and excessive – and therefore must be cut. While these beliefs are self-contradictory and strongly challenged, if not refuted, by experience, politics is not a rational practice and there’s nothing to stop a party from appealing to a contradictory policy agenda.

Less sympathetically, the Republicans are the party that most directly represents those individual and collective interests that will gain greatly in the move to maintain and lower taxes on the wealthy, exult in the cutting and privatization of entitlement programs and public services, and generally support a roll-back of popular/democratic power within the institutions of the state. So, public incoherence may well be the necessary public face for policies that cannot be honestly stated in polite company.

On this reading, the Republican party is the electoral mouthpiece for a set of interests that have set the terms of American politics for the last 30 years and those interests have not changed nor has their political power been significantly reduced by the recession or the brief period of Democratic electoral dominance. The political clout of these wealthy corporate and individual interests maintains a political economy that has been incredibly lucrative for a small minority and negative to disastrous for nearly everyone else. Dealing a further if not final blow to organized labor, public sector workers, and public services and infrastructure is simply a continuation of their political agenda. It’s no surprise that Republicans and their clientele use deficit hysteria to enable “reform,” which seems to amount to little more than handing out tax cuts like they were flavored condoms at a sleazy middle-aged orgy. Much as I’d like to think the Republicans are a malicious combination of vicious, stupid and mentally unfit, the irrationality of their policies evaporates once we properly identify who it’s intended to benefit.

Indeed, nothing indicates so clearly the GOP’s sharp turn to the right on economic issues, and its exuberant embrace of the winner-take-all economy, than the unrelenting priority placed on tax cuts for the wealthiest Americans. When DeLay said nothing was more important at a time of war than cutting taxes, he could easily have just said, “Nothing is more important than cutting taxes on the wealthy, period.” In the new GOP’s economic cookbook, all the pages bore the same recipe, whether there was war or peace, recession or booming growth, high deficits or low. When push came to shove, and the party was forced to indicates its true priorities – deficit reduction or tax cuts; tax cuts for the middle class, the well-off, or the truly rich – the answer always came back the same: tax cuts for the rich. Everyone else could get back in line.

At a time when the country faced profound challenges – healing America’s ailing health-care system, improving the nation’s schools to face the demands of a new century, coping with the looming financial strains associated with an aging population – Republicans insisted that the country’s top priority was big tax reduction for those at the top. They did so even though the incomes of the rich, and their share of national income, had grown faster in the previous decade than at any time in at least a century.

Yet, understanding the logic of the Republican’s austerity agenda – which involves cuts to public spending at the  local, state and federal level along with a refusal to raise revenue and an attack on public institutions as such – only returns us to the questions raised by Nick and Roberto, namely, why do these policies persist with such seeming ease despite the negative consequences for the majority of people?

That question, for now, will have to wait for a future post that wrestles with these issues in a broader arena.

For more ugliness see this from Altman at The Nation

One thought on “Austerity, USA”