Christopher McIntosh is a Visiting Assistant Professor in Political Studies at Bard College whose published research examines the concept of war, “terrorism,” and the intersection of time and temporality in international politics. He most recently co-edited a volume called Time, Temporality, and Global Politics, and he is currently completing a book project entitled, Theorizing the Interim: IR as Study of the Present.

Given recent events in the United States and Europe, it appears IR scholars have fallen victim, in the words of Robert F. Kennedy (among others), to an ancient “Chinese curse”: “may [you] live in interesting times.” From my position as an American citizen writing in the United States, American politics—both foreign and domestic—appears completely consumed by Trump’s actions, the moves of his “administration,” and the role of Russia in the 2016 election and potentially beyond. Nationally televised Congressional hearings during the day and seemingly daily “bombshell” news stories breaking at night have made it appear as if the US polity is in a unique, ongoing crisis. As overwhelming as it sometimes appears, as IR scholars we cannot afford to look away, as much as we might like to do so. By all accounts, these are, indeed, “interesting times.” Trump’s rise and the rise of the global right potentially upends much of what we think we know and could create a series of natural experiments that confirm or disconfirm our theories.

END_OF_DOCUMENT_TOKEN_TO_BE_REPLACED

A guest post by Hagar Kotef and Merav Amir. Hagar Kotef is a Senior Lecturer of Political Theory and Comparative Political Thought at the Department of Politics and International Relations, SOAS, The University of London. She is the author of Movement and the Ordering of Freedom (Duke University Press, 2015). Dr Merav Amir is a Lecturer (Assistant Professor) of Human Geography at the School of Natural and Built Environment, Queen’s University Belfast. Her recent publication is titled “Revisiting Politicide: State Annihilation in Israel/Palestine”, and is due to be published in Territory, Politics, Governance.

In trying to understand the horror that unfolds post Trump election, two main threads seem to dominate left discourse and blogosphere. The first rightly focuses on the horror itself, on the unprecedented coup-d′état unfolding before our eyes, on the attacks on the constitution, on fascism or other forms of totalitarianism or authoritarianism, and on brute institutionalized racism of a regime that does not even seek to pretend it adheres to the rule of law and good governance.

All this is true, and yet this narration often fails to account for three main facts. (i) Such brutal constitutional changes and violent re-demarcations of the contours of the polity are hardly unheard-of, both historically, and at this very political moment in many places across the globe. Portraying this horror as unprecedented and unique, indeed as an unbelievable horror, is a form of American exceptionalism that plays into the normalization of violence in regions that are not considered part of the ‘West’. (ii) Many of these violent regime-changes across the globe have been occurring with at least the passive, if not the very active, involvement of consecutive US administrations. Finally, (iii) such modes of foreign “interventions” (we might want to call them wars or imperialism—“neo” or just that, “imperialism”) are often what allowed the Western metropoles of the American empire to remain largely peaceful and relatively prosperous. That is, it is by externalizing its violence that the US could be “exceptional” in the meaning suggested in (i). We should therefore be careful in reproducing a pattern in which “the real crime”, as Arendt put it in regard to a previous age of totalitarianism, was when totalitarian violence moved out of Africa (at first to Asia and then to Europe) “since here [unlike in the case of “African savages who had frightened Europeans literally out of their wit”] everyone ought to have known what they were doing.”[1]

END_OF_DOCUMENT_TOKEN_TO_BE_REPLACED

This is a guest post by Maria Brock. Maria is about to commence a postdoctoral fellowship at the Centre for Baltic and East European Studies and the School of Cultural and Critical Theory at Södertörn University (Stockholm). She has a PhD in Psychosocial Studies from Birkbeck and has perviously published on the role of negative affect in reactions to the case of Pussy Riot, and the status of memory objects and ‘museums of the everyday’ in the proliferation of post-socialist nostalgia.

In July 2016 – more than 15 years into his time in office – Vladimir Vladimirovich Putin’s approval rating was at 82%, a figure made all the more remarkable by the fact that the country is experiencing a palpable and lengthy economic downturn. Some commentators have favoured an explanation that treats this as proof that a larger-than-life president is more in line with ‘what Russians want’, as Putin “satisfied a yearning for a strong leader who could make the Russian family proud”. However, concretising a Russian ‘national desire’ is less than helpful if we seek to understand the reasons behind Putin’s continued popularity. Equating a historical past with an inherent propensity to follow strong-men is an exercise in oversimplification, as it treats nations and groups as essentially static, prone to repeat the same historical patterns over and over again. Similarly, a focus on the more overt parallels with the earlier ‘Cults of Personality’ neglects the fact that the underlying ‘conditions of possibility’ that produced the two phenomena are different. Such comparisons also fail to explain the appeal of similarly larger-than-life politicians in countries with a longer democratic tradition. Clearly, an emphasis on national psychological propensities is not productive. Instead, an analysis of the appeal of such leader figures that taps into less conscious mechanisms is worthwhile. By simultaneously looking at the phenomenon of Donald Trump’s remarkable rise, a number of parallels pertaining to the creation of their public personae become apparent. In fact, such an analysis can serve to illuminate overarching principles structuring the successful creation of their outsized public personae. 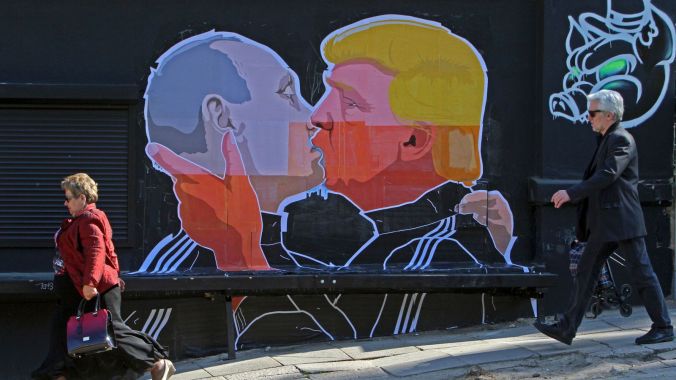 The popular support these politicians attract demonstrates that they hold a kind of libidinal appeal that should not be underestimated, lest we render a large part, if not the majority, of a country’s population politically incompetent. While one cannot discount the real inequalities, as well as the real and imagined grievances that opened up the space for less established political figures to gain support, it is nevertheveless worthwhile to examine why these particular kinds of candidates hold such appeal. Their reliance on spectacle and well-orchestrated exploits which combine the hypermasculine with the hyperreal enabled them to set in motion processes of identification that transcend the need for a coherent, well articulated political agenda. Instead, while seeming unsubtle to the point of being crass, they simultaneously operate on a more subliminal level, remaining oblique enough to become conduits for the electorate’s personal hopes and grievances. While this piece centres on the representational mechanisms employed by Vladimir Putin and his team of PR advisers, it is possible to identify a number of parallels with other contemporary leader figures – chief among them Donald Trump – each of whom appears to rely on a kind of hypermasculine charisma to suture a political field that is otherwise characterised by cynicism towards established politics.