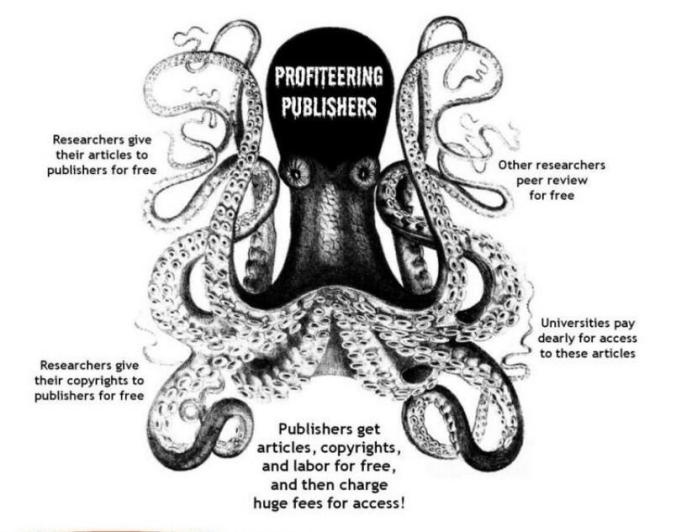 This was in someone’s open access slide show someplace, but the name, and therefore the credit, escapes me.

I have a piece up at e-IR today returning to the question of open access. It is partly an introduction to the issues, partly a manifesto on why academics should take the digital commons more seriously. But it is mainly intended as a provocation for the discipline (proto-discipline, non-discipline, borg-discipline, what you will) of IR, and a challenge to the in my view excessive resistance to open access that characterises its upper echelons. To wit:

What is IR’s contribution to the open access movement? Almost nothing, arguable less than nothing. There is no IR equivalent of ArXiV  – the hugely successful online repository favoured by physicists and mathematicians. Nor of PLOS  – the gigantic open access mega-journal suite favoured by hard scientists, which sustains itself on low relative processing charges. Nor of Cultural Anthropology – a learned society journal gone fully open access. No experiment like the Open Library of the Humanities – a new platform-cum-mega-journal funded by a conglomerate of libraries. No appetite for something like Sociological Science – an open access journal with quick review times and low, means-tested article publishing costs. There are a handful of open access IR journals, like Ethics & Global Politics (not to be confused with Ethics & International Affairs), the Journal of Critical Globalisation Studies, and the Journal of Narrative Politics, run largely on goodwill, but they are sadly lacking a disciplinary presence. Publishing in them will not make a career, and is unlikely to impress hiring committees which have an eye to bankrupt measures of quality like the journal impact factor.

Worse still, the discipline of IR has missed opportunities to make itself more open and relevant, all the while fretting over its introversion and lack of relevance. Some of our responses to the open access movement have been sadly conservative and dismissive. New journals like the European Journal of International Security and the Journal of Global Security Studies are run on the standard closed model. Neither the leadership of the British International Studies Association nor the International Studies Association have followed the innovations carved out by colleagues in anthropology, sociology or STEM subjects. And young journals that position themselves as disrupting orthodoxy (such as Critical Studies on Security) have nevertheless emerged under the imprint of familiar publishing houses. While Editorial Boards in other disciplines are considering resignation and boycott to force change on the system, IR scholars are joining an ever-growing list of titles that promote business as usual. Closed journal publishing has become common sense: unquestioned despite its manifest failings.