This post is Part 3 in a series of dispatches posted from a 130, 000 ton container ship. More here. 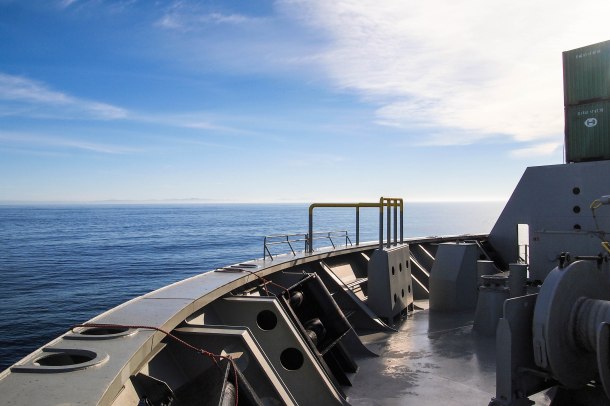 The bow of the ship is the only place on the Ever Cthulhu that affords a modicum of silence. To get there, you walk down the length of the narrow grey deck, flanked on one side by containers crowded into towering stacks that scrape and creak against each other as the ship cuts through the waves, and on the other by the powerful sweep of a wind so strong that you have to fight not to be blown backwards. At the foremost tip of the ship, you climb a few steps onto a large open deck painted grey and surrounded by giant chains and fat coils of synthetic rope, and suddenly, the mechanical roar of the ship falls away.

Having finally wended our way out of the US ports, the Ever Cthulhu has been traveling across the massive pacific ocean for more than a week now. Yesterday, we cleared the frigid Kamchatka Peninsula. The snow and ice beating against the ship for the past week has melted away, and the deck crew that has been trapped inside cleaning the walls and floors of the accommodations are now back to work on the endless task of the seaman: fighting against perpetual rust. “You know Sissyphus?”, The captain asks one day as we take a walk around the deck. “Working on a ship, it’s like that. You are fighting forever against the saltwater eating away at your vessel. The biggest enemy of the ship is not pirates, it’s corrosion.” Today, the ship has been awash in the sounds of grinding, scraping, hammering and drilling, scraping rust off and painting over it in an endless cycle that repeats itself every two months. All of this is set to the background soundtrack of an endlessly roaring engine that suffuses the air and shakes the accommodations with a throbbing, pulsating, machinic hum.

But on the bow, penned in from the wind and rage by the Ever Cthulhu’s bulwark, you can look outward onto an endless, unbroken horizon of ocean in near quiet, and almost think that the ship is barely moving. A quick step up onto a grilled ladder quickly dismisses this fantasy of a softly drifting ship: peering over the edge of the ship’s prow towards the churning waters below reveals the ship’s bulberous bow, a 1,000 ton snout-like protrusion of pure aerodynamic steel that cuts through the ocean, almost heaving the liquid blue upwards before pushing it back powerfully against the hull, where the waves churn themselves into a cerulean blue froth and then crest outwards in a diagonal wake. I can’t judge how far we are from the ocean’s surface, so I spit into the sea – crude, really – and count the seconds it takes to hit the waves. Seven. By the time it reaches the sea below, my ball of spit has already flown several meters behind me. We are forging ahead at a speed (18 knots per hour) beyond my bodily comprehension of motion. When you are surrounded by nothing but this limitless, shifting, liquid expanse, stretching in all directions for days before hitting land, all distance becomes incalculable.