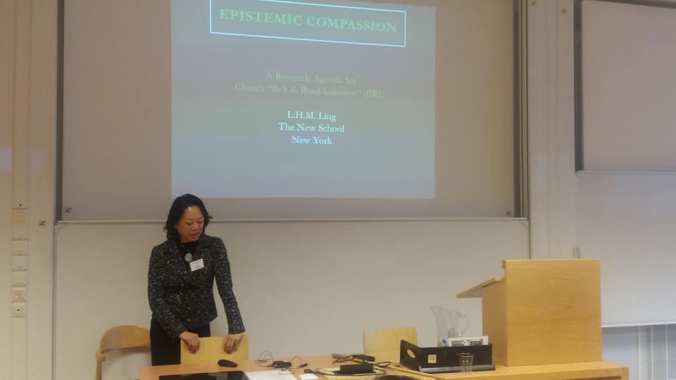 One day before, we had been exchanging a series of emails on ISA and those related to India and China. Lily forwarded the email from Mark Silinsky that she had received and we talked about contemporary anxieties, changing the ISA culture, getting members to demand more from the Association. She was on extended medical leave in Syracuse and seemed upbeat and hopeful. And on October 2nd, just as I landed in Kigali to talk about epistemic compassion and global knowledges from Africa, I heard that Lily was gone, just like that. I had never imagined writing an obituary for her but here I am, putting into words the most difficult of emotions.

I have known Lily for a while, mainly through our ISA encounters and her extraordinary scholarship. When she was program chair, the sapphire panels were introduced by the ISA, for which she copped unfair criticism from members. She always took pains to explain the situation and her generosity and empathy were easily grasped. When I requested her to write the afterword for a special issue of Postcolonial Studies on ‘Feminism meets Postcolonialism’, that I was editing, she immediately agreed and we received such a thoughtful text from her.i

During the last year, our email exchanges had expanded to so many different ideas of common interest including psychoanalysis, philosophy and dream interpretation. My angst filled ‘eastern’ (Indian) upbringing and orientation found a wonderful scholarly companion and mentor in Lily. We talked about the civilizational legacies of India and China, Hinduism, Sufism and Buddhism, the Mahabharata, the life of the Buddha and the Hindu philosophy of Advaita Vedanta. We discussed how in the Western tradition, the terms ‘mind’, ‘self’ and ‘consciousness’ are often used synonymously. In the Eastern traditions, mind and body, are considered to be the results of Maya or Prakriti, fundamentally material principles. We debated the differences between the senses, reason or intellect, the ego and conscious memory. Those emails are staring at me today, reminding me of what it could have been had we had a few more years of these conversations and exchanges.