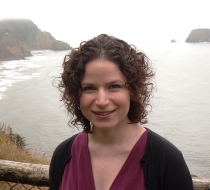 A guest post from Lauren Wilcox, currently Charles and Amy Scharf Postdoctoral Fellow in the Department of Political Science at Johns Hopkins University. Lauren is starting a new job as a University Lecturer in Gender Studies at the University of Cambridge this fall. Her  work is located at the intersections of international relations, political theory, and feminist/queer theory in investigating the consequences of thinking about bodies and embodiment in the study of international practices of violence and security. She is the author of articles in Security Studies, Politics & Gender and, most recently, International Feminist Journal of Politics. Lauren’s current book manuscript is entitled Practices of Violence: Theorizing Embodied Subjects in International Relations. 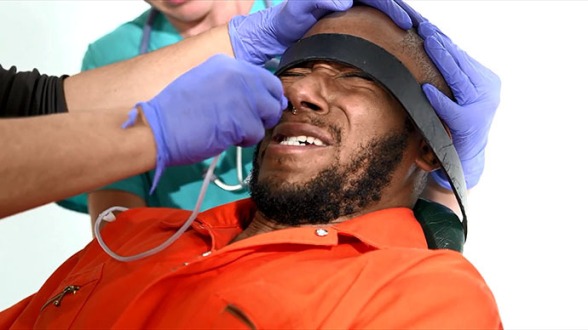 Earlier this month, the UK human rights organization Reprieve released a video in which Yasiin Bey, formerly known as Mos Def, a well-known and critically acclaimed American hip-hop artist and actor, underwent (or attempted) the force-feeding procedure undergone by hunger strikers imprisoned at Guantánamo Bay. In this five minute video, Bey dresses in an orange jumpsuit like those worn by prisoners at Guantánamo Bay, and states simply that this is the ‘standard operating procedure’ for force-feeding hunger striking prisoners. He is then shackled to a chair resembling those used to force-feed prisoners (such as those pictured below). Bey is approached and held down by two people who attempt to insert a nasogastric tube down his nasal passage way. The video shows Bey struggling against the nasogastric tube, crying out, protesting, yelling for it to stop, and ultimately the force feeding is not carried out. The video is extremely emotional and difficult to watch. After the attempted force-feeding ends, Bey struggles to describe what it feels like, describing it as ‘unbearable’. It ends as it begins, with Bey stating ‘peace’ and ‘good morning’.

For some background context, 166 prisoners remain in Guantánamo Bay: of these, 126 have been cleared for release as not posing any threat to US national security, but are still being imprisoned. To protest their treatment and indefinite confinement prisoners have engaged in hunger strikes since the prison camp opened in July of 2002, the first wide scale hunger strike reached a peak in June 2005, when between 130-200 out of approximately 500 prisoners at Guantánamo Bay began refusing food. Hunger strikes again reached a peak in the spring and summer of 2013, and are ongoing with around 100 prisoners refusing food, and of those, between 44 and 46 are being force-fed (pictured above is an image of an inmate being hauled to the medical facilities to be force-fed), a number so high that the military had to send a back-up team of medical personnel to assist with the force-feeding of prisoners. While the force-feeding of hunger strikers when virtually unnoticed in the media in 2005/6, and again in 2009, the latest months have brought renewed attention to the plight of those who have been held at Guantánamo Bay, some for over a decade, with seemingly no progress made on holding tribunals or securing release of the remaining prisoners. Prisoners have spoken out, including an op-ed published in the NY Times by Samir Naji al Hasan Moqbel entitled “Gitmo is Killing Me”. While President Obama has recently renewed his pledge to close Guantánamo Bay, and a federal judge has even more recently stated that while she had no power to stop the force-feedings, Obama could himself order the force-feedings stopped.

What are the effects of Bey’s action? END_OF_DOCUMENT_TOKEN_TO_BE_REPLACED