Despite some news coverage and discussions on Twitter, we’ve seen little on the continuing educational and political crisis in Quebec. Hence, a guest post from our friend and colleague Philippe Fournier. Philippe teaches political thought and International Relations at the Université de Montréal and the Université du Québec à Montréal. He has published research on Foucault and International Relations, Governmentality in the contemporary United States and Violence and Responsibility. He is currently working on the government of security in the US and on the theoretical conflation of sovereign power and government in Foucault. His other research interests include critical cultural theory and political economy.

A little background info and some thoughts on the student crisis in Quebec, which has been going on for 101 days now and shows no signs of waning in the face of the government’s disturbing intransigence. The recent adoption of Bill 78, which circumvents the right to protest without prior notice and gives the police the right to change a demonstration’s itinerary, among other things, has shocked and angered many Quebecers and made the news worldwide. On Tuesday May 22, over 250 000 people expressed their discontent with the current government and it was quite a sight. 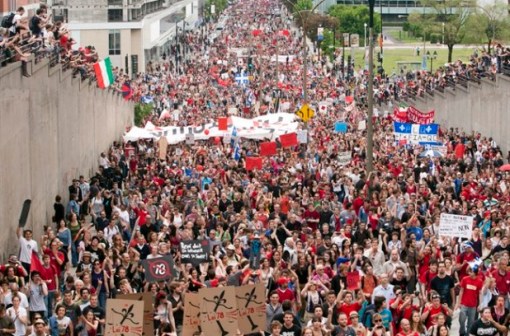 Ever since the ‘quiet revolution’ in the early 1960s, which saw the institution of important social provisions and the attribution of several socio-economic entitlements to the francophone majority, Quebec has been holding fast to its social-democratic heritage. Jean Charest’s liberal party, in power since 2003, is determined to fight off the modern-day antichrist of debt and rationalise state activity. The Charest government’s attack on hard fought social entitlements, including accessible post-secondary education (Quebec has the lowest tuition fees in Canada), has been going steady since 2003 but has intensified since 2008. Quebecers were told that it was no longer reasonable to expect affordable public services and that it was high time that we join the pay as you go party.

What is at play in this conflict is no less than the fate of social-democratic expectations in Quebec. These expectations are actively discouraged and discredited by the current political elite. The demands for a tuition freeze by sizeable portions of Quebec’s students are considered unreasonable in many quarters, and seen as a plane expression of bad faith and overindulgence by a majority of Canadians, seemingly stuck in a Stephen Harper induced stupor. The words ‘pragmatic’, ‘realistic’ and ‘rational’ have been duly appropriated by the partisans of deregulation, free-enterprise and individual responsibility. Any suggestions that the latter orientations are based on an ideological choice are ridiculed; they simply express a sounder and more logical way to manage society.

Up to now, there seemed to be a dour resignation to the decimation of our social programs. This young generation of Quebecers, which many had touted as completely apathetic and apolitical, has taken a resolute stand against restricting access to a public good, against the further commodification of knowledge and against the uncompromising law and order approach of an arrogant and irresponsible government. Those that have taken to the streets day after day and sacrificed their terms and put their professional lives on hold for the students that will come after them, have shown extraordinary resilience and bravery. It came as a surprise to many, because they did it on their own, with little or no help from their political science professors, who have long abandoned critical thinking for functionalist replications of reality sanctioned by government money.