Once a French neologism, precarity is now a household name describing in equal measure the fate of low-wage, part-time holders of bullshit jobs, seasonal and migrant workers, creative entrepreneurs of the self, “graduates with no future,” foreclosed homeowners, debtors and increasingly even segments of the salaried bourgeoisie. At its most basic, a term for the economic uncertainty and existential angst associated with the dissolution of fixed employment, precarity also suggests the disintegration of stable societal bonds, occupational identities, social protections and a sense of entitlement and belonging characteristic of the old proletariat. In short, then, precarity is the experiential dimension of the crisis of the society of work dating back to the 70s and 80s.

Increasingly advanced production methods, introduced since the 70s to tame shop-floor insubordination as well as reap the untapped potentials of global competition, have caused a decline in growth rates, which no amount of privatization, financialization and austerity measures has been able to make up for since. Andrew Kliman and others have argued that it is this real crisis in capitalist productivity that lies at the heart of the current slump, and not simply unrestrained financial gluttony, as the more short-termist analysis offer. As capitalist production develops, machines replace people and the rate of profitability, which is given by the human labor theory of value, drops, causing sluggish investment and slow growth. This is essentially Marx’s theory of economy crisis, aka the tendency of the profit rate to fall, but also a story we should know by now from Autonomist accounts about the transition from Fordism to post-Fordism (Hardt and Negri) or from profit extraction to rent-becoming-profit (Christian Marazzi), and from David Harvey’s accumulation by dispossession.

If we shift the scale of our focus from capital to labor, though, we see that the crisis of capitalist productivity is, in fact, a crisis of work or a crisis of a society built around work as the only legitimate point of access for income, status and citizenship rights. Again, Marx is instructive here: “Capital itself is the moving contradiction, [in] that it presses to reduce labour time to a minimum, while it posits labour time, on the other side, as sole measure and source of wealth.” Socially necessary labor is reduced to a minimum (through things like automation, outsourcing, and financialization) at the same time that human participation in paid work continues to remain our only measure and source of wealth. Work doesn’t disappear as a result. It becomes fragmented, devalued, and wasteful, ceasing to provide a social identity or a collective language of experience.

Precarity is a word for our time. It describes the slow disintegration of the historic bond between capitalism, democracy and the welfare state. But it also entails a rallying cry to reverse this situation. END_OF_DOCUMENT_TOKEN_TO_BE_REPLACED 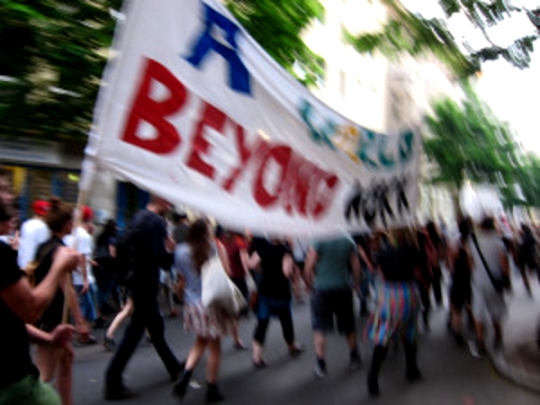 At the heart of recent discussions on work lies an enduring tension. We can sense that modern work isn’t working anymore, but we don’t know how to let go of it. The disintegration and degradation of wage labor through technological “progress,” increasing commodification and devaluation of reproductive work, steadily rising unemployment and precarious employment, and sustained attacks on the last bastion of permanent employment (the public sector) together with our desperate attempts to resurrect a corporatist corpse that won’t return, all point to the fact that modern employment “exists less and less to provide a living, let alone a life.” Marxist outliers (Andre Gorz, Ivan Illich, Antonio Negri, Zerowork) have been announcing a crisis of work for some time now, remarking how automation both reduces necessary labor time and degrades work without, however, releasing us from the obligation to earn money for a living. Today work persists in a zombie state despite the disintegration of working class culture and organizations and a continuous process of proletarianization. These conversations have returned in full force in recent years with the publication of Kathi Weeks’ groundbreaking The Problem with Work: Marxism, Feminism, Antiwork Politics and Postwork Imaginaries and a sustained interest in these matters in the Jacobin and even mainstream media.

In these debates, however, there remains an unreconciled tension between the obligation (of any self-respecting socialist) to celebrate work as a source of collective power and personal pride and the more futuristic desire to overcome work and even our self-understanding as workers for a more multivalent understanding of life. This is effectively the tension between Marx and his son-in-law Lafargue, between laborists and anarchists, between a politics of equality and one of autonomy. Of course, there can never be a satisfying answer to this problem because the dichotomy itself is a sectarian caricature. Much more interesting would be to stick with this tension as a provocation for a politics whose form and direction has yet to be decided.

How do we, at once, celebrate the types of cooperation, organization, and identities born out of wage labor and recognize that these are inadequate and insufficient modern inventions that have run their course? How can we advance the cause of wage laborers and fight for people to one day stop functioning as workers? An impossible (and scandalous) proposition such as this is the “refusal of work,” the Italian autonomist theory/practice, which claims that workers are able to produce and sustain value independent of capitalist relations of production and centralized power.