This post wraps up our forum on Philip Cunliffe’s Lenin Lives! Reimagining the Russian Revolution, 1917-2007 (Zero Books, 2017). See here for the introduction and responses from Jamie Allinson and Alex Sutton.

I am delighted not only by Jamie Allinson’s and Alex Sutton’s intellectual generosity, but also their careful attention to the detail of the inverted counter-factualism. Both Allinson and Sutton take me to task in seeking to create a Marxist ‘social science fiction’, Allinson for the lack of ‘verisimilitude’. Sutton takes these criticisms further. He enjoins me not only to identify what we might call the Singularity of the Left – that point at which things went decisively wrong – but also criticises me for not agonising in sufficient detail over the political problems of my counter-factual world as well the actually existing world. Sutton asks, for example, which specific institutional body would be responsible for deciding to annihilate a fictional puppet-state of West Germany ensconced in the post-war Rhineland by a counter-revolutionary League of Nations that I portray in the book.

Yet I explicitly set myself against any attempt to construct the ‘verisimilitude’ of a counter-factual history in every precise detail. This was partly a stylistic choice, heeding Ken Macleod’s warning against the tedious introverted detail that preoccupies ‘alt history’ Internet chat forums. More than this, though, it was also an intellectual choice, chosen in opposition to that notorious, barren search for the single moment at which things definitively ‘went wrong’. As Slavoj Žižek has said, this is one of the most insidious traps for the left. Loren Goldner’s summing up of these debates cannot be bested, and is worth quoting at length:

Into the mid-1970’s, the ‘Russian question’ and its implications was the inesca­pable ‘paradigm’ of political perspective on the left, in Europe and the US, and yet 15 years later seems like such ancient history. This was a political milieu where the minute study of the month-to-month history of the Russian revolution and the Comintern from 1917 to 1928 seemed the key to the universe as a whole. If someone said they believed that the Russian Revol­ution had been defeated in 1919, 1921, 1923, 1927, or 1936, or 1953, one had a pretty good sense of what they would think on just about every other political question in the world: the nature of the Soviet Union, of China, the nature of the world communist parties, the nature of Social Democracy, the nature of trade unions, the United Front, the Popular Front, national liberation movements, aesthetics and philosophy, the relationship of party and class, the significance of soviets and workers’ councils, and whether Luxemburg or Bukharin was right about imperialism.

It is not that I consider such debates as unimportant, but rather that the problem is not the identification of a single decisive turning point after which ‘everything went wrong.’ Rather, as Chris Cutrone has argued, the problem was that political defeats – of which there were many, not a single overarching one – were recast or misconceived as victories. Thus was virtue made of necessity. Hence, over certain moments in the counter-factual narrative – what happens to the British Labour Party in revolutionary 1920s Britain? how precisely did Rosa Luxembourg and Karl Liebknecht evade their captors and manage to overcome the political problems confronting the Spartacists? – I deliberately leave a veil to obscure the reader’s gaze. If historic accommodation to defeat was part of the problem for the left, then I resolve it by presenting the history of an expanding, self-reinforcing revolutionary victory spreading from Germany through Italy to France and Britain as well as China, the US and Japan. More than this, I drive this point to its logical conclusion. If, indeed, humanity had succeeded early in the twentieth century in overturning capitalism and thereby scaling a higher peak of emancipation than hitherto achieved, then all the lesser crests of twentieth century ‘progressive politics’ – civil rights, Third World revolution, feminism – would be left in the shadows, having been overawed by revolutionary transition to socialism, and eventually communism dissolving society itself. 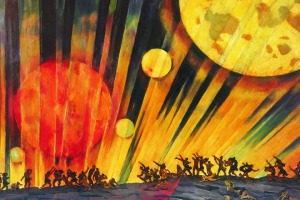 Sutton is sceptical that economic growth and technology are sufficient to overwhelm single-party rule and dictatorship saying this is a ‘very bold claim’, and he is troubled by my depiction of even socialist states based on higher principles of freedom surviving into the 1970s. But it is an old and simple claim as much as a bold one, as made clear by Trotsky in his Revolution Betrayed:

The philistine considers the gendarme an eternal institution. In reality, the gendarme will bridle mankind only until man shall thoroughly bridle nature. In order that the state shall disappear, ‘class domination and the struggle for individual existence’ must disappear. Engels joins these two conditions together, for in the perspective of changing social regimes a few decades amount to nothing. But the thing looks different to those generations who bear the weight of a revolution. It is true that capitalist anarchy creates the struggle of each against all, but the trouble is that a socialization of the means of production does not yet automatically remove the ‘struggle for individual existence.’

As I make clear in the book, of the revolutionary socialists of the twentieth century, only Lenin was willing to deliver on the failed, old liberal promise of shrinking the state even though, by his own admission, he, too, failed to do so. The prolongation of the state deep into my counter-factual twentieth century was to illustrate one of the core and most overlooked propositions of Marxist theory, in opposition to that of liberalism and anarchism – that the state withers away under transformed social conditions, rather than being abolished by fiat or kept in abeyance by the dynamism of civil society.

Sutton is also puzzled by my claim that communism would make Marxism redundant, suggesting that it should remain as an eternal, elaborated body of knowledge for understanding social development. The premise of Lenin Lives! is of Marxism as a critical science, not a positive one: it exists not to help us devise hypotheses about social development, but to resolve the contradictions of capitalist society, and in so doing, resolve society itself. Thus communism makes society itself redundant, allowing humanity to emerge from the social integument.

Allinson too recoils from the utopian premises of Lenin Lives!, wondering if the necessity of communism will be imposed by the global imperatives of adapting to climate change rather than the need to resolve the contradictions of capitalism. Sutton suggests that a strength of my book is that it shows that nearly anything is better than our current world. Yet that is not a sentiment I share, and, as Allison suggests, it is possible to imagine plenty of worlds that are much worse than ours. If Allinson is right that socialism will emerge from the rigours of a massive wrenching adaptation imposed by a changing climate, then we, too, would only be replicating the disastrous illusions of the twentieth century: draping adaptation in the mantle of liberation rather than necessity. I would still stand by the utopian premise of the book: the real challenge of asking ‘what if …?’, is to imagine radical improvement in our conditions. The reflex dystopian instinct, more a legacy of the twentieth century than the conclusion of climate science, should be strongly resisted.