Bringing to a close our symposium on Bodies of Violence is Lauren’s rejoinder to all our contributors, Kevin McSorley, Ali Howell, Pablo and Antoine.

First, a huge thank you to the (Dis)order of Things and especially Antoine for organizing this forum and to each of the contributors. It’s been a huge honor to have my work read so carefully and responded to so thoughtfully and I welcome the opportunity to try to clarify some of my work and acknowledge where the contributors have pointed out helpful areas for future research.

As Pablo K and others noticed, Bodies of Violence it is not meant to be a general theory of embodiment in IR (I’m not sure such a project is feasible or politically desirable in any event).  It is a more specific intervention with a different ambition: both to speak to ‘mainstream’ concerns about theorizing violence, particularly forms of political violence associated with the ‘war on terror’ and to make not only a theoretical argument about how we might or should theorize embodiment and violence, but also to show that understanding these different ‘modes of violence’ necessitates such an understanding of the relationship between bodies, subjects and violence.  My rationale for using feminist theory to think about the relationship between bodies, subjects and violence in IR was not meant to be exclusive: certainly (other) people working with concepts of biopolitics as well as anti-colonial/anti-racist theorists, disability theorists, phenomenologists and more also have much to say on this topic, some insights of which have been very important in my analysis, if not as fully fleshed out (if you will) as my engagement with feminist theory is.[i] For me, it was a particular reading of feminist theories of embodiment, not solely based on Butler, but on a particular feminist problematic in which women, as a category of those constituted, as Pablo K put it, the “improperly bodied”, are politically disenfranchised and generally excluded from their status as a fully human subject that served as a starting point, but far from an ‘ending’ for thinking about the subject of embodiment.  Rather, it is, as Kevin noted, “the specific tradition of trying to think through women’s subordination in terms of the relationship between bodies, subjects and power” that feminist theory entails that I wanted to use to think about violence and embodiment in ways that I hope will speak not only to feminists in IR but also to other critical and the more pluralistically and trans-disciplinarily minded scholars in IR and beyond as well. 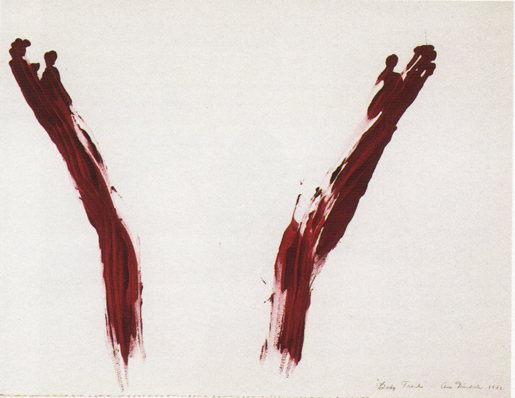 However, this brings us to some of the drawbacks of feminist approaches to violence and embodiment. Ali’s point about the violence of feminist theory is a particularly good one. Feminists working in IR tend to be quite aware of the uses of feminism for violent aims: the Taliban’s oppression and abuse of women in Afghanistan as a rationale for war by the US and its allies being supported by NOW and the Feminist Majority is a well-known example. Ali’s point about the violence of some feminism(s) against trans-people is also well-taken; though Butler is hardly a ‘TERF’ by any means, her work has been critiqued by trans-theorists for a number of reasons. For the purposes of this book, I don’t necessarily see a conflict between trans-theory and Butler’s theory of the materialization of bodies and the limits of intelligibility as being relevant to the ways in which security practices work to materialize only certain bodies as ‘real,’ often excluding trans- people and constituting them as threats. In general, I agree with Ali that we should welcome feminist scholarship and practice that is less defensive in regards to the ‘mainstream’ of the discipline and more willing to seek alliances and interlocutors from a broader range of scholars, both in the spaces of IR and outside doing work on violence, power and embodiment.[ii]

Forum contributors also provided some excellent provocations for thinking about aspects of embodiment or ways of addressing the thorny question of embodiment that my book did not focus on. Pablo writes, “It is a book thoroughly about bodies, but not therefore necessarily a theory of bodies and embodiment. And it is theory of em-bodies-ment that we may in need of.” On a somewhat different note, Kevin wonders what might happened if the embodied subjects of which I write “could have a more audible place in the analysis.” Of course, it (should) hardly need mentioning the great amount of work influenced by feminist and postcolonial theory that strives to bring the voices and experiences of embodied subjects, particularly of marginalized peoples, into IR as a disciplinary space. I would point, for one example, to the work of Christine Sylvester and others on experience as an embodied concept for theorizing war. However, as Kevin points out, my book has a different, and I would hope, complementary aim: to show the explanatory and critical value of theorizing bodies as both produced by, and productive of, practices of violence in international politics.  It is the last point, that bodies are productive of violence, which speaks more to Pablo’s concern about bodies ‘mattering’.

While Bodies of Violence is perhaps most influenced by Butler’s project, as Kevin, Ali and Pablo K have all noted, theories of embodiment (or at least the relationship between discourse and materiality) such as Elizabeth Grosz’s Volatile Bodies and Barad’s ‘posthumanist performativity’ as well as Donna Haraway’s work are perhaps more of an influence than appears in the published version of the book, which takes as an overarching frame Butler’s concepts of normative violence and ontological precarity. These other works are concerned, in their own way, with the ways in which matter ‘matters’ or the ways in which embodied subjects exceed their materializations in discourse.[iii] 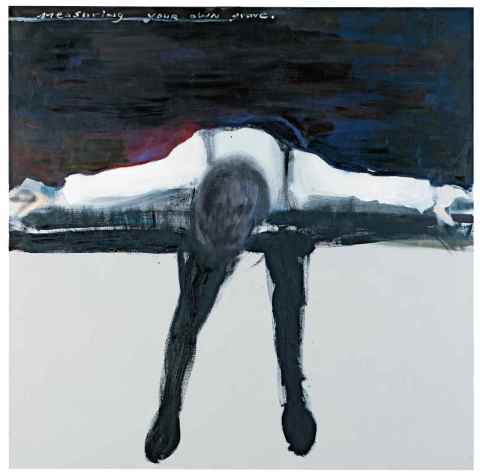 Marlene Dumas, Measuring Your Own Grave

It is the ‘generative’ or ‘productive’ capacities of bodies that is an engagement with ‘new materialisms’ or ‘feminist materialisms’ if you like. One of the aspects of Barad’s work, whom Pablo mentions, that is most appealing is the insistence of intra-activity, with the implication that we cannot meaningfully separate matter from the discursive, as phenomena only exist by virtue of ongoing assemblages and reassemblages of matter and discourse.  Bodies ‘matter,’ they do things, they have what Diana Coole refers to as ‘agentic capacities’.  One reason that Bodies of Violence focuses on actual instances of violence perpetrated on and by bodies in international politics is precisely to take bodies seriously as something other than ‘representations’ or ‘abstractions’ in IR. An example of bodies being ‘productive’ in the book are the ways that bodies ‘speak’ which might exceed the intentions of ‘speaking subjects’. Antoine’s discussion of my work on the hunger striking body in Guantanamo Bay (which I also discussed earlier here on the blog) makes reference to this point: the body in pain as a call for recognition. This is something the body ‘does’ that is not reducible to the intentions of a fully constituted subject nor the words spoken by such subjects (this is in addition to the ways in which hunger striking prisoners such as Samir Naji al Hasan Moqbel have spoken eloquently about their experiences). And yet, while this body’s actions may have certain implications, enable certain politics, etc, this cannot be understood without understanding that the body’s capacities are already subject to prior materializations and their reception will also bear the marks of prior political assemblages as well.

A key example of this from the book is the embodiment of drone operators, or perhaps more accurately, the legal/technological drone assemblage.  While this form of embodiment is what might be termed, following Haraway, a ‘material-semiotic actor’, it is a body, or form of embodiment, that is necessary for the kind of ‘death-world’ that enables the killing of suspected militants as well as those people who can only be named innocent or militant in the aftermath. Both bodies of drone operators and the people who are killed by drone strikes are intimately connected in this way: the embodiment of drone pilots is productive of the bodies of targets and the ‘uncountable’ bodies whose deaths remain outside of the epistemological framework enabled by this drone assemblage. Thus, there is less of an explicit engagement with ‘new materialisms’ per se than an acknowledgement (one that has been part of feminist theory for decades) that one cannot determine or write bodies ‘all the way down’ and that, in the words of Samantha Frost and Diana Coole,’ nature ‘pushes back’ in sometimes unexpected ways, but in ways that are nonetheless subject to human interpretation. 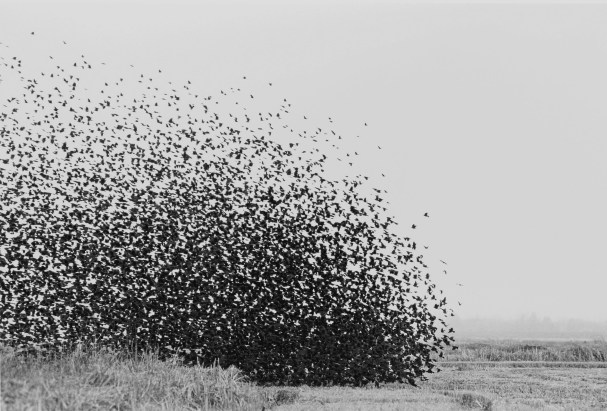 Antoine concludes the forum on a forward-looking note that also recalls Ali’s point of the various forms of critical literatures that have much to offer our thinking about bodies and violence beyond feminist literatures: “a growing task of critical scholars in the future may therefore also be that of attentiveness to new forms for the sorting and hierarchizing of bodies, human and otherwise, that are emerging from the production of scientific knowledges.” I agree and (some of) my current research is aimed precisely at the question of gender, queer theory and ‘the posthuman’. While I am wary of certain tendencies within some of the critical literatures of affect theory, ‘new materialisms’ and the like that suggest either explicitly or implicitly that feminist, anti-racial or other such critiques are outmoded, scholars like Rosi Braidotti and Donna Haraway have read the feminist politics the ‘posthuman’ in ways that engage the shifting materialities and discursive constructions of gendered and sexualized bodies. I’m working on a project now that pursues the question of embodiment and ‘drone warfare’ future to consider the politics of the insect and the swarm as inspirations for military technological developments, in the manner that Katherine Hayles describes as a double vision that “looks simultaneously at the power of simulation and at the materialities that produce it” in order to “better understand the implication of articulating posthuman constructions together with embodied actualities” (Hayles 1999, 47). This is to say both discursive constructions of insects/swarms in culture (particularly their association with death, abjection and the feminine) as well as the material capabilities of insects and their role in the earth’s eco-system and its own set of ‘death-worlds’ can and should be thought in tandem. The parameters of this project are yet not fixed (are they ever?) and so I’m grateful for this conversation around Bodies of Violence as I work to further the project of taking embodiment and its relationships with subjectivity and violence seriously in thinking about international political violence in its myriad forms. These contributions are evidence that work on embodiment in IR and related disciplines is becoming a robust research area in which many possibilities exist for dialogue, critique and collaboration.

[i] Also, feminist theorists such as Butler, Grosz, Haraway and Ahmed all engage in a variety of traditions as well, from psychoanalysis, Foucauldian theory, phenomenology, postcolonial theory, and more, so the divisions between ‘feminist theory’ and other kinds of critical theory is far from given, and a much longer piece could be written about this.

[ii] Although see recent work by Rose McDermott and Dan Reiter that seems determined to ignore the advances of decades of scholarship on gender, feminism, and war.

[iii] I agree with Pablo K that Butler’s work is ambiguously situated in relationship to the so-called ‘new materialisms’: I make a brief case in the book that it is not incompatible with her approach at times, but I don’t explore this at length in the final version of the text.