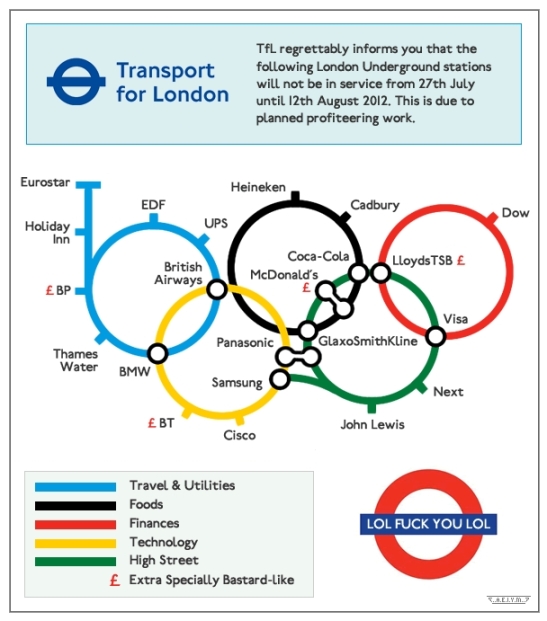 The chafing constraints of a thesis prevent any original reflection on our hallowed Olympic moment (not least because Rahul has already said so much, and so well). There was little to better Iain Sinclair’s apt diagnosis of “a wonderful national hallucination: a beautiful conjuring between William Borroughs and Charles Satchi…the combination of paranoia and advertising run wild” (a clip worth watching for Jon Snow’s outraged ignorance at the origins of the Olympic Flame [clue: Nazis]). Reports had filtered through that the economic miracle was not as originally billed, with talk of Central London’s ‘ghost town’, stimulating a description elsewhere of the Olympics as an “economic bomb deployed against world cities”. And now there is the most welcome return of K-Punk. At length:

Welcome to the Hunger Games. The function of the Hunger Games is to suppress antagonism, via spectacle and terror. In the same way, London – 2012 preceded and accompanied by the authoritarian lockdown and militarisation of the city – are being held up as the antidote to all discontent. The feelgood Olympics, we are being assured, will do everything from making good the damage done by last year’s riots to seeing off the “threat” of Scottish independence. Any disquiet about London 2012 is being repositioned as “griping” or “cynicism”. Such “whinging”, it is claimed, assumed its proper place of marginality as the vast majority enjoy the Games, and LOCOG is vindicated…

…But once the Olympic floodlights are turned off, most will switch back from an attitude of mild interest to indifference towards even the most dramatic Olympic sports, never mind those many Olympic sports which plainly have limited specator appeal. This isn’t the point though: disquiet about London 2012 was never necessarily based in any hostility towards the sports. Enjoyment of the sport and loathing for LOCOG and the IOC are perfectly compatible.

Cynicism is just about the only rational response to the doublethink of the McDonalds and Coca Cola sponsorship (one of the most prominent things you see as you pass the Olympic site on the train line up from Liverpool Street is the McDonalds logo). As Paolo Virno argues, cynicism is now an attitude that is simply a requirement for late capitalist subjectivity, a way of navigating a world governed by rules that are groundless and arbitrary. But as Virno also argues, “It is no accident … that the most brazen cynicism is accompanied by unrestrained sentimentalism.” Once the Games started, cynicism could be replaced by a managed sentimentality. 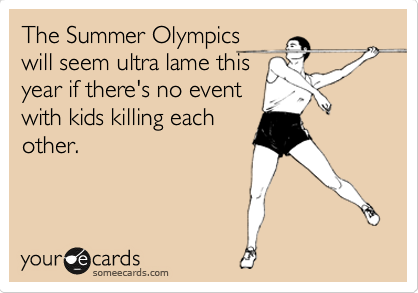 Affective exploitation is crucial to late capitalism. The BBC’s own Caesar Flickerman (the interviewer who extracts maximum sentimental affect from the Hunger Games contestants before they face their deaths in the arena) is the creepily tactile trackside interviewer Phil Jones. Jones’s “interviews” with exhausted athletes, are surely as ritualised as any Chinese state broadcast. Emote. Emote again. Emote differently. Praise the crowd.

And, just in case you somehow missed it, the irrepressible CassetteBoy: