My friend and colleague Mark Kersten has been drawing my attention over the last weeks to a spate of stories about Libya in which it is claimed Gaddafi has been distributing Viagra as an inducement to sexual violence against ‘enemy’ civilian populations. Colum Lynch reported in late April that Ambassador Susan Rice had cited the use of Viagra and evidence of sexual violence during a meeting of the UN Security Council (although this itself is at least third hand – Lynch seems to have picked up the details from Reuters who were passed the information by a UN diplomat who was in the room). The story seems to have originated, or first surfaced, at The Daily Mail, which claimed “numerous reports” of Viagra use.

The testimony of Suleiman Refadi, an Ajdabiya surgeon, in this Al Jazeera piece is the closest thing to a direct claim that Viagra has been distributed to troops. But, as Lynch points out, Human Rights Watch followed up his allegations and say that Refadi had “no direct evidence”, which I assume means either that he himself hadn’t seen the Viagra and condoms, or that some had been found, but not in any pattern that would associate them with a strategy of war rape. Human Rights Watch have a number of reports and commentaries addressing rape in Libya, but do not seem to have found the Viagra claims credible enough to include. Now the International Criminal Court is investigating. Luis Moreno-Ocampo intimates that he has solid evidence for the claims and declares: “It’s like a machete…It’s new. Viagra is a tool of massive rape.”

That kind of blanket statement makes me suspicious. Reports are so far conflating (or not sufficiently distinguishing) two different claims: 1) that government forces are engaged in rape in Libya; and 2) that Viagra (and sometimes condoms) are handed out as an incentive or aid for that. Claim 1 is entirely plausible and there is already good evidence for it in the case of Libya. Elisabeth Jean Wood has done some important early work on the question of variation in wartime sexual violence and her early conclusions are that there are some contexts in which rape doesn’t occur in war. But the number of such cases is very small. Rape in war is overwhelmingly the norm. This should lead us to a number of questions about type, degree, form, causes and the exact sense in which we mean ‘tool’, ‘weapon’ and ‘strategy’. But reports of rape by soldiers are not in themselves at all surprising.

What is new is the second claim. To my knowledge, this is the first time that Viagra use has been linked to war rape. Moreover, it is more common for it to be claimed that condoms are not used, since this makes the spread of disease and infection among feminised enemies easier. The idea that Viagra is needed for soldiers to rape is not credible. The amount of sexual violence recorded in the DRC does not seem to have required the prop of stimulant drugs. The scale of rape and violation that marked the Second World War, the Vietnam War, the Bosnian rape camps and the Rwandan genocide, amongst a litany of others, proceeded on a sufficiently vicious and sickening level in the absence of Pfizer’s artificial genital stimulants. Nor does it seem that Viagra would work for these purposes, since it doesn’t really work for men without erectile dysfunction and can even be painful. And that’s leaving aside the stupidity of conflating ‘rape’ with ‘penetration by a pleasured penis’: a common association which reduces rape to an extension of ‘normal’ sexual lust, rather than a much more complex form of sexualised power, especially in periods of violence when it is purportedly being used as a tactic or strategy. 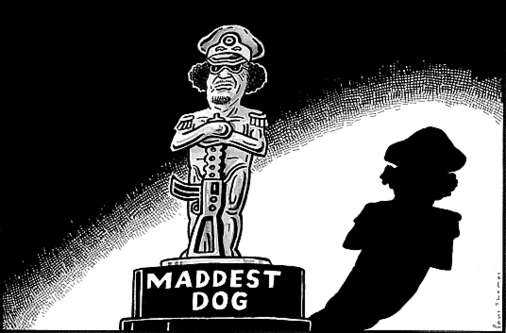 Of course, it may be that Gaddafi believes the use of Viagra to be effective and so is pursuing the policy despite its ineffectiveness. Or that the Viagra and condoms were planted on his enforcers not for actual use but to promote fear that they might be used. This opens up a series of interesting associations. On one level, it conforms entirely to the preferred image of The Colonel as Mad Dog, one suddenly useful again, but no more convincing for that. At another, there is the association (whether for readers of these stories or for the participants themselves) of rape with an ambiguous masculinity: both a sign of sexual prowess (look how many times he got it up!) and of sexual failure (what kind of half-man needs Viagra to enjoy the spoils of war!).

Given yesterday’s post on atrocity ratcheting in rape stories, the context of this claim should also give pause. As far as we currently know, the two initial sources for the story are unverified claims by a Libyan doctor and a story in The Daily Mail, justly notorious as a hot-bed of lies, half-truths and sensationalist fictions. It was deployed, apparently without any further intelligence or detail, in a closed UN Security Council meeting in which one Permanent Five member was trying to get others to commit to expanding military intervention. Details of these discussions, focusing predominantly on the Viagra dimension rather than on better indicators (numbers of Internally Displaced Persons, sieges of towns, generalised attacks on civilians, violations of the Laws of War, etcetera.) were then leaked, presumably in an effort to put further pressure on states to commit resources, legitimacy and arms.

All this suggests to me that caution is in order. Not just because the claims may not be true. As important is resisting the dynamic of atrocity ratcheting. We shouldn’t need stories about Viagra to think that bad things are happening in Libya, or to care about them. And whether violation is sheathed or unsheathed should not determine our behaviours or provoke our consciences.

5 thoughts on “‘Like A Machete’: Is Viagra A Weapon Of War Rape In Libya?”