Primarily, our action is based on national self-interest. In other words, it is patriotic. A certain limited number of persons are fond of decrying patriotism as a selfish virtue, and strive with all their feeble might to inculcate in its place a kind of milk-and-water cosmopolitanism. These good people are never men of robust character or imposing personality, and the plea itself is not worth considering. Some reformers may urge that in the ages’ distant future patriotism, like the habit of monogamous marriage, will become a needless and obsolete virtue; but just at present the man who loves other countries as much as he does his own is quite as noxious a member of society as the man who loves other women as much as he loves his wife. Love of country is an elemental virtue, like love of home, or like honesty or courage. No country will accomplish very much for the world at large unless it elevates itself. The useful member of a community is the man who first and foremost attends to his own rights and his own duties, and who therefore becomes better fitted to do his share in the common duties of all. The useful member of the brotherhood of nations is that nation which is most thoroughly saturated with the national idea, and which realizes most fully its rights as a nation and its duties to its own citizens.

Roosevelt’s imperial condescension is but one of the historical anecdotes mobilised in a recent paper by Robert Vitalis to trace the legacy of empire and race in the development of International Relations as a discipline. Although eschewing a direct critique of the contemporary field (since “the likelihood is small that self-identified specialists in international relations will seek out an account of the discipline’s past in a journal that has no standing in the field”), he nevertheless provides a wealth of historical detail on the complicity of scholarly ancestors in ‘colonial administration’ and its attendant euphemisms.

Take A. Lawrence Lowell, a political ‘scientist’ who went on become President of Harvard and used that lofty perch to impose a  dormitory colour bar for freshman in 1915 (and a man now also revealed as the convener of homophobic secret trials). A proponent of professionalised training for colonial administrators, Lowell also set legal arguments before Congress explaining that the requirements of the Constitution need not be upheld in those violently-acquired territories where the racial capacities of the indigenes fell short of proper statehood. And, like a rather more recent over-flattered Harvard globetrotter, he was particularly interested in the wisdom to be gleaned for such bold endeavours from British experiments

Or take the institutional delivery rooms of International Relations itself. At the first ever APSA conference in 1904, ‘Colonial Administration’ was designated one of the five fundamental branches of Politics. One prominent speaker that September was William Frank Willoughby, an APSA founder, its 10th President, and the author of Territories and Dependencies of the United States (1905). He crafted this work in a particularly applied setting (pay heed ye  assembled bridgers of theory and practice), serving as both Treasurer and Secretary of Puerto Rico from 1901-1907. It seems reasonable to assume that auto-ethnographic reflexivity did not feature heavily in his work. A decade later he became director of a new research body, soon re-christened as The Brookings Institution.

And what of our learned fora? Perhaps most symbolically of all, the debates over the proper governing of lesser peoples were carried out in the discipline’s first publication, The Journal of Race Development. It was founded in 1910 by G. Stanley Hall, who headed up a centre on the psychology of the races at Clark University, and who also pioneered the idea that the developmental stages of individual humans mirror the hierarchies of race, with children being to adults as savages are to the civilized. The twist being that in 1922 The Journal of Race Development became Foreign Affairs, still the go-to publication on global ‘administration’ (although this particular legacy is mysteriously absent from its current autobiography). 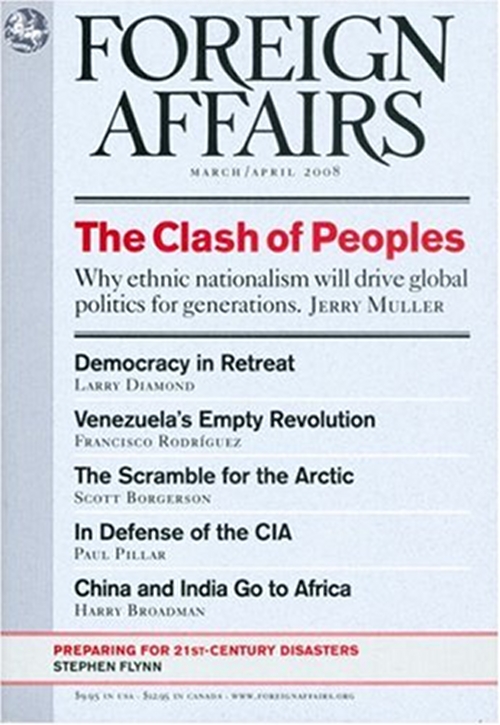 Several general themes emerge from the detail. First, far from positing states as the central actors of global politics, the comprador intellectuals of the early 20th century saw race, both within and without the United States, as the salient frontier. The earliest IR scholars all included American racial relations (to wit, the Southern ‘Negro problem’) within their disciplinary remit. In a racial supremacist twist on W.E.B. Du Bois’ ‘colour line’ “the world’s biological boundaries mattered much more to theory-building than did territorial boundaries”.

Second, the centrality of race as a category was not a mere function of scientific ignorance. Empirical evidence was already mounting by the turn of the century that the supposed physiological differences between races were apocryphal. While some proponents of racial order stopped believing that (to give just one example) black untermenschen were constitutionally incapable of living in the northern US, they did tend to remain loyal to the Larmarkian orthodoxy and its cod-evolutionary explanations of perfidious heritage.

Third, the counter-arguments to imperial administration that did exist took very particular forms. Within the field, Vitalis distinguishes between those who saw racial hierarchy as “real and ineradicable” and their apparent critics, who suggested instead that it was real but not fundamental, and so malleable to the efforts of uplift and benign education through global federation. Only with Du Bois does there emerge a genuine anti-racist internationalism, although here too ideology demonstrated its flexibility, with some holding  him up as proof of the possibilities of black intellect, given the right environment. Ultimately, the open discussion of eugenic destiny was undone by a combined attack of biology on the one hand and an emergent cultural anthropology on the other, respectively furnishing a universalist account of the human species and a historical account of socio-political-symbolic community.

And yet this history, for all its richness and scandal, seems strangely retrograde. We have moved some way since the justification of power in terms of racial hierarchy, so what can such archival scrambling offer our postcolonial present? One particularly exacting form of the challenge would be to move it closer to home, as John Hobson did a few years ago in diagnosing a Eurocentric, even pro-imperialist, bias in nominally critical IR. Doing so means turning our attention from the invocation of primordial fantasies to the more subtle ‘culturalisation’ of supremacy, whether in rampant pro-interventionist policy talk or the ontological assumptions of absent ‘Eastern’ agency. It would mean beating on Gramscians and feminists as much as on Realists and chroniclers of Empire. It would mean taking reflexivity seriously.

As necessary as that qualified critique is, it is not incompatible with addressing the legacies of scientific racism. Indeed, a post-racist IR needs histories of racist IR on at least two fronts. Most obviously, the growth in this kind of work offers an opportunity to ‘mainstream’ our imperial legacies. Reading lists demand a citational substratum. Lectures demand potted counter-narratives. It may be true (as Hobson, following Robert Young, suggests) that we have over-emphasised pre-1945 racism to render post-1945 racism more palatable. But we can deal in continuums as well as dichotomies. The revisionist works of the last decade or so seem, at least from the perspective of this small corner of the world, to be making their mark, and (pending the requisite institutional support) it is not hard to imagine younger academics constructing introductory courses to International Relations around stories of Empire and other encounters rather than a standard Western ‘logic of immanence’.

Moreover, this historiography serves to complicate smooth disciplinary stories on its own terms. Take one of Hobson’s central criticisms of critical IR – that it has (often, if not always) fetishised Westphalia and foregrounded it as creation myth in the familiar way. Certainly, the protagonists exposed by Vitalis held civilizationalist views of global politics. Certainly, they ‘othered’. But their particular ideological lens is also interesting precisely because Westphalia does not seem to feature centrally. States are not rendered as self-contained entities, at least not in this example of a pubescent American imperium. Its problem-solvers dealt at a quiet conscious level with internal civilizational struggles and contrapuntal histories, with ‘Mormon’ and ‘Indian’ problems as well as ‘negro’ ones. The historical form taken by their political cosmologies should concern us whatever the rest of the discipline is up to.

In an earlier piece Vitalis noted, quoting Ralph Ellison, the way in which American life is a “drama acted out upon the body of a Negro giant, who, lying trussed up like Gulliver, forms the stage and the scene upon which and within which the action unfolds”. If we might say the same of IR’s relationship to race and empire in its own house, then perhaps we can attempt a provisional distinction between a genealogy of imperial histories (in all senses, whether disciplinary and/or socio-political) and a critique of contemporary hierarchy and emancipation (whether marked by continuity, disjuncture, dialectic or transformation), two necessary directions for a genuinely post-racist discipline.

3 thoughts on “The Racial Empire of International Relations”