In the wake of the financial crisis, and the re-establishment of massive corporate profits during a vertiginous economic period, the issue of inequality has become increasingly prominent amongst critical thinkers. The recognition that the period of neoliberalism has been beneficial in a massively asymmetrical way to the richest is a powerful argument against the neoliberal dogma. Yet with countries like the UK disproportionately cutting government spending on the poor, it seems that the only thing changing is the ease with which the poorest can be attacked. 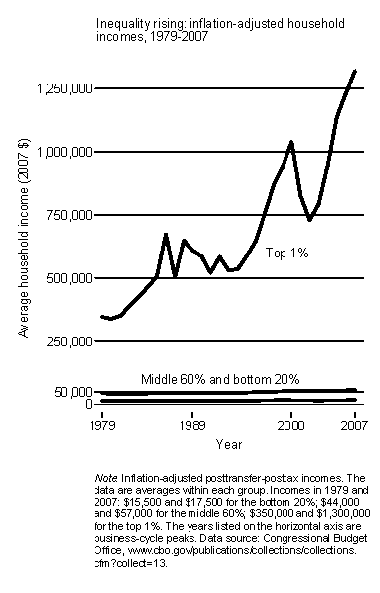 In light of this, two recent pieces of research on inequality raise some interesting questions about the social understanding of inequality and about the nature of ‘conservativeness’ in America. The first piece from Michael Norton (Harvard Business School) and Dan Ariely (Duke University) undertook a random survey of Americans, seeking to find answers to two basic questions:

1)      What level of inequality do you think currently exists?

2)      What level of inequality would exist in an ideal society?

The authors mapped out the answers to these surveys, and presented them along with the inequality in actually existing capitalism. The results are intriguing – not only do people underestimate the level of inequality in society, but they level of equality they think an ideal society should have is surprisingly leftist (particularly for a conservative country such as modern America).

The first disconnect – between perceptions and reality of inequality – is perhaps unsurprising. There may be ideological covers for this disconnect, and there may be simple cognitive limits to it as well. For instance, various studies have shown that the primary determinant of happiness is relative wealth and not absolute wealth. People tend to be more aware of their close social network and their standing relative to it, rather than their relation to any sort of social totality. The result is that people systematically misperceive the social totality.

The second disconnect – between perceptions and the ideal – is much more interesting, and leads us to the next piece of research on inequality. Because if the ideal society of most Americans tends towards a quite leftist position, how do we explain the pervasiveness of the conservative position (and the rise of the Tea Party) within American politics?

According to Nathan Kelly (University of Tennessee) and Peter Enns (Cornell University), it is partly because – counterintuitively – increases in inequality lead to increasingly conservative political positions. As Mark Thoma relates:

Their first main finding: increases in inequality are associated with a conservative shift in mood and increasing opposition to welfare. (For more on why this would be true, see this paper (pdf) by Roland Benabou.)

Their second main finding: increases in inequality are associated with a conservative shift among both the wealthy and the poor.

One natural objection: perhaps some citizens, and especially poorer citizens, just do not realize that inequality has increased. But the third main finding contradicts this: over time, the poor are actually more likely to perceive increased inequality than do the wealthy.

Kelly and Enns explain this oddity by arguing for a form of ideological cover – the media may have been more prone to emphasize individualism during good economic times (that is, good for the richest). The poorest therefore have been led to believe that their social standing is their individual responsibility (one of the tenets of Mark Fisher’s capitalist realism). While this is likely partly true, it seems unlikely to be the full story. The surge of conservatism in the face of rising inequality (and the simultaneous belief in an egalitarian ideal) is an open paradox on the issue of inequality.

Of course, the giant elephant in the room with all this research is ‘class’. In neither of the two articles is there a single mention of the word. The great taboo term of America is not a profanity, but rather a political term. Without the concept of class, there is no suggestion of struggle between them, or a concerted effort to shape distributional conflicts in beneficial ways. There’s no sense of structural positions and what this entails for individuals. There’s no sense of systemic forms of exploitation. Even work by the former IMF employee Simon Johnson and James Kwak on the political economy of Wall Street ties the knot between class and political power tighter. If American political economy is going to move ahead, the phobia of class needs to be overcome and a sober look at how political and economic power have intertwined over the past 40 years needs to be undertaken.

On a final, more pragmatic level – there may be a warning in this research for the numerous rumblings of a ‘winter of discontent’ in the UK. Despite the clear-cut class struggle within America and the UK, leftists cannot assume the support of the public. (A visit to The Guardian’s CIF comments can make this abundantly clear as well.) The paradox of inequality may therefore be that in a situation primed for leftist intervention, it is the conservative tendency that nevertheless dominates.

7 thoughts on “The Paradoxes of Inequality”